It is a fast, simple, and useful freeware, and shows the results of the logical expression in form of truth table. All you have to do is either open a .txt file containing the expression, or manually type/copy-paste the expressions, and get solution with just a simple click on Run button. Besides this, there are many more features you can try your hands on, like: change expressions precedence and word wrapping, to help you write expressions more conveniently. 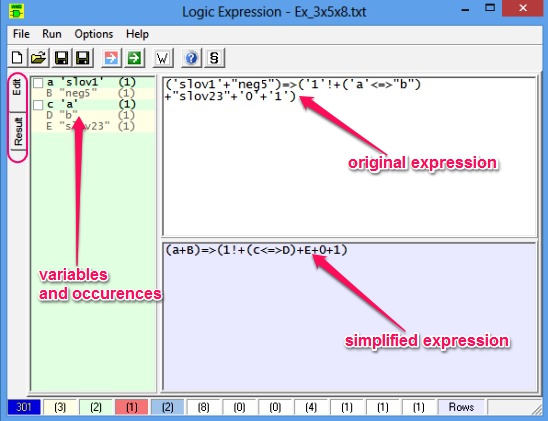 Logic Expression is a lightweight freeware and downloads fast. It is a good software to be used in educating and proves quite handy for developers in solving complex Boolean expressions.

This is a good freeware to simply solve complex Boolean expressions. It’s quick, gives plenty of space to write the expressions, transforms a long complex expressions into a simplified expression, and gives accurate results. The freeware doesn’t requires too many resources to run.

The interface of the freeware is simple and easy to understand. Also, the buttons on the toolbar pretty much explain themselves. The major buttons at the toolbar are: New, Open, Save, Save as, Run ->ABC, Run!, and Word wrap.

The whole process of entering and solving a Boolean expression is divided into two major toggle tabs: Edit and Result. These are present at far left side of interface. You’ll enter expressions in the Edit tab and the results will be shown in Result tab. Both of these tabs have three panes: Top right pane, where the actual expression is entered, Bottom right pane, where the freeware generates a simplified version of the same expression, and Left pane, showing simplified variable with their original variable and number of their occurrences in expression. 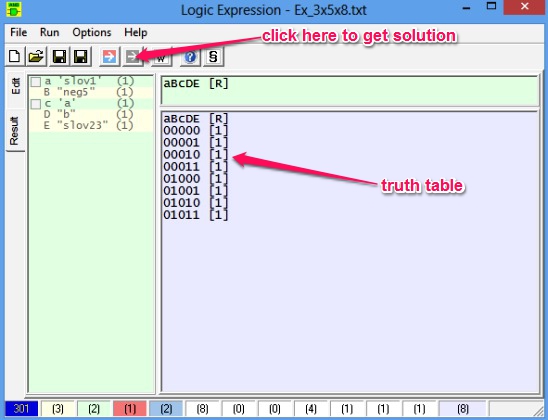 All you have to do is enter the desired expressions containing variables(operands) and operations, and click on bottom right pane, and finally click on Run! button. The result will be shown in truth table form, showing all Boolean possibilities for variables and the final solution.

You can control the precedence of expressions by using the round brackets.

You can also execute the other Run ABC feature. This feature basically lets you test one or two value expressions, like #1 (negation of 1), 1+0 (disjunction of 1 and 0) etc. 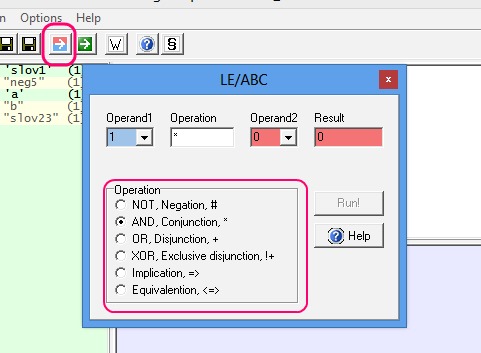 Logic Expression is a good freeware to solve complex Boolean expressions. However you can’t save the Boolean result. Other than that it works pretty well. All in all a good free tool.