In this Article, I have covered 4 YouTube Subtitle Translator Chrome Extensions. Each extension works differently. Each of them lets you translate the subtitles in various languages. All you need is to add an extension to your Chrome browser. These extensions support many languages. It becomes easy for you to understand the video in your choice of language. YouTube is a mainstream website for watching videos. It lets you watch various videos with subtitles. You must have seen those subtitles are usually in English language. You can translate them to know the meaning in your language using these extensions.

There are many people who do not understand the language other than their local language. What if we watch the movies with the translation in the language we want? This post is about those subtitle translators. Let’s understand about each extension one by one.

Dualsub is the Chrome extension that displays subtitles in two languages on YouTube. It displays the subtitles in a language which is chosen by you along with default English language. Once you add this YouTube subtitle translator to your Chrome browser, an icon appears at the above right corner. However, the icon does not help you set any language. To set a language, open a video on YouTube, you will see a small box named DS right below the title of the video on YouTube. That box contains two columns in which the first column is set as default to the English language. The other column can be your language of preference. Look below. 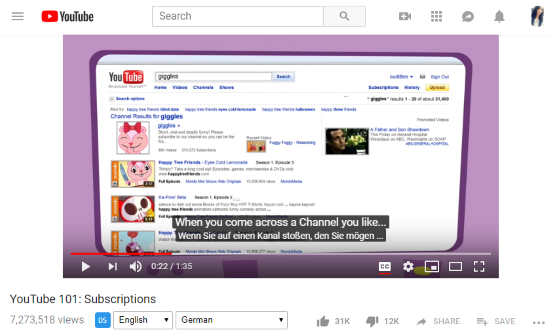 In the above screenshot, the first column defaults to the English language. The second column has the German language which is chosen by me. After setting my preferred language, the subtitles of video were automatically converted into that language. Then, it displayed subtitles in two languages at the same time on screen. You can even drag this subtitle part to anywhere on the screen. You can change to any language as this extension offers hundreds of languages.

This Chrome extension is somewhat similar to the above-mentioned extension. Its name in itself reveals that it translates subtitle into two languages and displays them at the same time on screen. It does not only works with YouTube but also with Netflix and Amazon. You can simply add this YouTube subtitle translator to your Chrome browser. An icon appears next to the address bar. You have to click on the icon to set language preference of subtitles. It has two functions. Firstly, you have to click the CC button displayed on a YouTube video screen to start the captions. Secondly, you have to turn on the second language subtitle from the extension interface. It supports 100’s of languages. You can also add space between the 2 subtitles being displayed to understand them properly. To do so, you can go to settings tab next to the main section. You can see below how it looks. 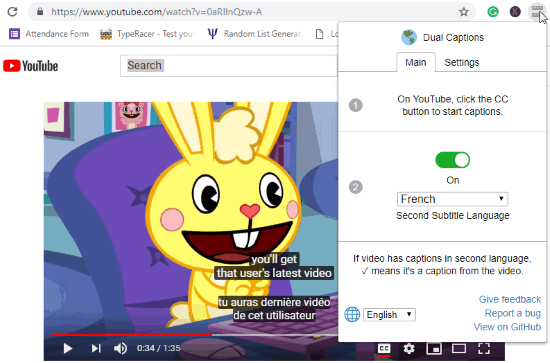 Here, I have set my subtitle language to French. The default English subtitles will also be displayed alongside. After this setting, it gets translated automatically to French. Also, you can see the settings option in which you can turn on the space between both the languages to understand it better.

Wisesub helps in translating the subtitle in various languages. It is slightly different than others I have mentioned above. This extension only translates subtitles when you hover your mouse over the existing subtitles. After adding this extension to Chrome, you can select the language in which you want to translate it. The extension supports hundreds of languages. It has other features like it keeps the history of words that you searched before, you can clear history if you don’t want to keep it. You can create your own vocabulary. You can also search other phrases in the search bar. And for translation, you need to place the mouse cursor on the subtitles. Thereafter you can get the translation of subtitles. Look below. 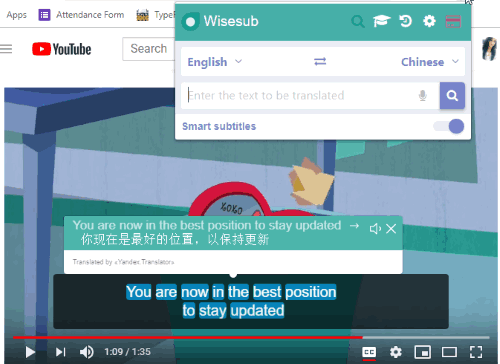 You can see the above image subtitles which I translated into the Chinese language. To do so, you can select the text or just place the mouse on any word which you want to translate. You can see other icons in the Wisesub slot in which the first icon lets you memorize words, the second icon lets you check the history of words you translated. The settings icon lets you set some preferences like you can make the background dark to focus on the video while you are watching. This YouTube subtitle translator also works in other portals like Netflix, Prime video, YouTube, TED, Amediateka, Vimeo, Coursera, etc.

Unitrans is the smart subtitle translator. I found it most convenient to use and to translate the words in many languages. Just open YouTube, then you can click on the extension icon. It displays the column that contains many languages as seen above. There you can select the language in which you want to understand the subtitles. This extension works in Netflix, Amazon, Ted and other portals. See below. 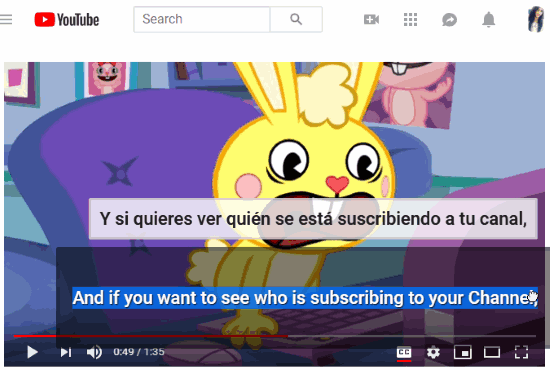 You can also read more about subtitle translator here.