Lost Grimoires: Stolen Kingdom is a free Windows 10 hidden objects game app where a young alchemist returns to her home town after several years and finds herself struggling to uncover mysteries related to her family and kingdom. The game has awesome graphics as you would expect from a game developed by Artifex Mundi.

You will only get a few levels of this game to play for free, after that you will be required to upgrade to a paid version. If you like the game then you can buy the complete game from the app itself.

The Windows 10 hidden objects game app can be downloaded from the Windows 10 store or from the link given at the end of this article. When you start this app you will come across an interface as shown in the screenshot below. 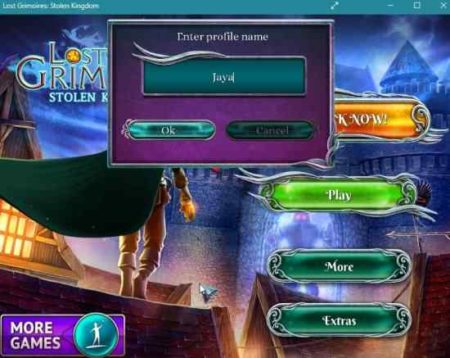 You have to enter you name to start the game. Once you do that, click on the play button to start the game. First you come across a video narration of the story of the young alchemist returning back to her home town. Then you are asked to select the difficulty mode of the game. 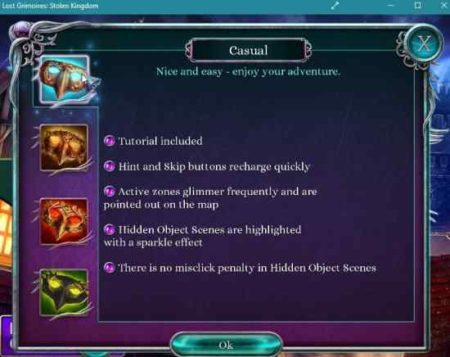 You can start with casual mode where there is a tutorial included along with hints and skip buttons which recharge quickly. The area with the clues will be highlighted and there is no penalty for misclicks.

In custom mode you can choose which aspects of the game you want to turn on or off, as seen in the screenshot below. Like you can turn the tutorial, map marks, sparkles, glimmering on or off. You can also select the misclick penalty you want to pay, the hint recharge time, etc. 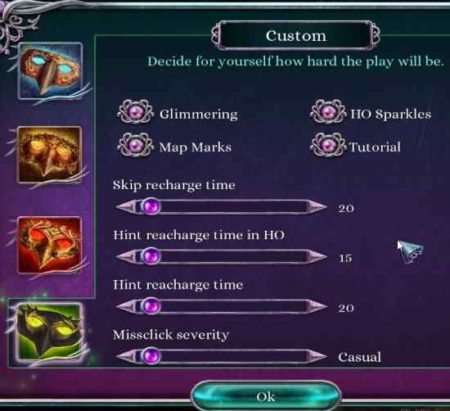 After choosing a mode you can begin with the game, where the young alchemist has to solve puzzles, gather clues to uncover mysteries related to her town. 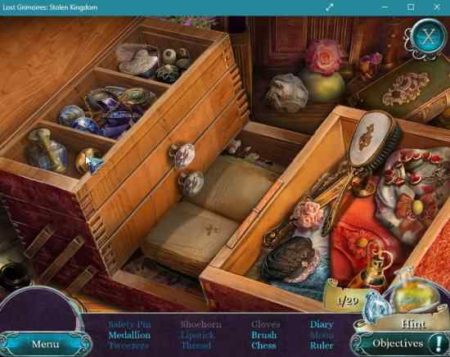 As you can see in the game screen above, you need to find the objects listed at the bottom of the window. Once you have done that you unlock clues and move on to the next level. There are also lots of mini games included which can be played in between object searches.

Lost Grimoires is a awesome game to play, but the only disappointing factor is that, it does not have a lot of free levels. After 2 or 3 levels its end of the road for free players. For playing further you have to upgrade to a paid version of the game. Which is a bit of a let down, because by this time you are too much into the game and want to play more. The free levels are really exciting and fun to play. If you find the game good, then you can always upgrade to the paid version to get the full game.