This tutorial explains how to rename and reorder virtual desktops in Windows 10. In the fast ring of Windows insider, the latest build has added option to rename and reorder desktop. You can now use simple drag and drop operations to change the order of any virtual desktop. A right click menu has also been introduced that lets you rename any particular virtual desktop. This is one of the major features that is added to Windows 10 and you can get it if you are in Windows Insider program. You can find and try these new features in insider build 21337 or wait for them to arrive in the stable Windows 10 release later.

If you use Virtual Desktops in Windows 10 to organize your tasks and work then you will the new update. Before this, Windows used to give a fixed name to desktops like Desktop 1, Desktop 2 …, and so on. But now, you can give a custom name to any virtual desktop in a couple of clicks. This is simple and very straightforward. You can see this in new Virtual Desktop update in action in the following video.

How to Rename and Reorder Virtual Desktops in Windows 10?

Assuming that you are a Windows Insider user and have subscribed to receive to the dev channel. All you have to do is just update to the latest version of Windows insider build that is 21337. Now, you just open virtual desktop using Win + Tab keyboard shortcut. 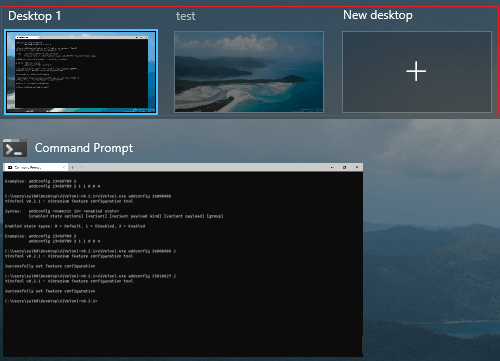 In the Virtual Desktops section, you can now right-click on any VD to open a context menu. There are few options there and one of them is “Rename”. Use it to set a custom name to any virtual desktop and hot enter. Also, you can move any selected virtual desktop to left or right. The same can be done with drag and drop method in order to reorder desktops.

This is it. This way, you can now rename and reorder virtual desktops in Windows 10. However. The catch is that it is only available in the latest insider build. If you are a Windows 10 beta tester then you can simply upgrade your build to get this feature. Or, just wait a bit longer till Microsoft adds this functionality into the regular stable build that usually arrives in April or October.

Renaming and reordering virtual desktops is indeed a very nice feature that Microsoft has added to Windows 10. I use virtual desktops and it was kind of annoying to see all my desktops have similar names and to be honest, it was confusing too. But now I am happy that now I can set a custom name them to separate different tasks.