Ever heard about a tweet that will be so big (or could be the biggest tweet ever till now) and used for charity? No, not in terms of characters; in terms of retweets and views. Yes, you heard it right. The Cafédirect Producers’ Foundation (a charity that supports tea and coffee farmers of many countries) wants to grow a very big tweet that will be auctioned for charity to help African farmers. And for this task, their website came into existence, named One Big Tweet.

So if, for example, #OneBigTweet is retweeted by 300 or more Twitter users and seen by millions of other users, it will definitely be a worth buying tweet for some ad or for any other purpose, right? The Cafédirect Producers’ Foundation came up with this great idea and is working to achieve their goal. Funds that will be raised with #OneBigTweet will be used for increasing the incomes for farming families, improving the yields, etc. So you are helping farmers without spending a single penny. 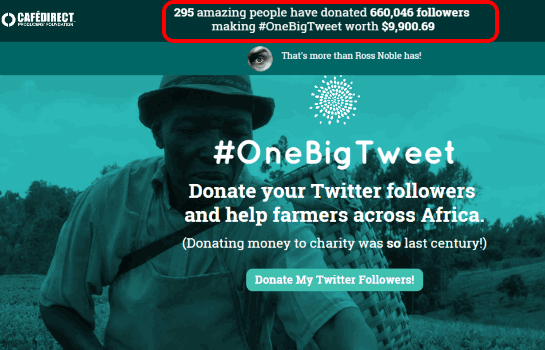 Above you can see the homepage of One Big Tweet website where you can see the total number of users (so far) who have donated their followers and the estimated worth of #OneBigTweet because of those followers.

This is also a good way to find the total worth of people who follows you on Twitter, isn’t it!

When you will open the homepage of One Big Tweet website, you can come to know why the foundation needs Twitter followers only, what are the rules behind this charity, and other things. If you believe that the website is good enough or safe to use, you can sign up using Donate My Twitter Followers! button. 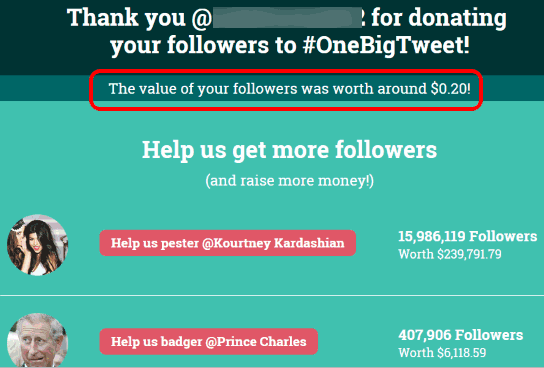 Also see: How to Donate To Charity without Spending Any Money

The other way to help grow #OneBigTweet is you can ask your followers or tweet celebrities to donate their followers.

The homepage of this website also provides button to Bid for #OneBigTweet. Anyone interested to buy the tweet can bid for it by sending his/her details. 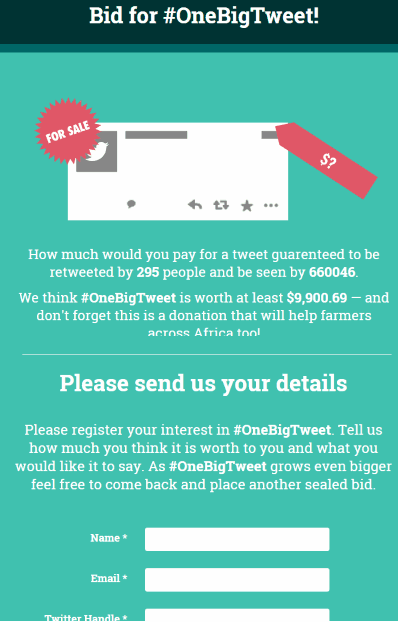 The Cafédirect Producers’ Foundation has come up with innovative idea to raise funds for charity. It would be interesting to see how much fund can be raised for farmers with this idea. They have begun the work and a good response has been given by users so far.