Here, I cover 5 online Haiku poem generator free websites. Haiku is a form of Japanese poem. It can be related to any topic such as Nature. The haiku poem consists of three lines. The first and the third lines have 5 syllables whereas the middle line has 7 syllables. So the syllable structure is 5-7-5 in Haiku poems.

These sites don’t require any registration or login to create Haiku poems. All you need to do is mention a list of a few words related to the subject. The words can be adjective, singular nouns, verbs, etc. Some of the sites let you add the number of syllables as well. Thereafter, you can generate poems in the form of Haiku. All the words mentioned by you are inserted in the Haiku poem according to the specific syllable structure.

Let’s go through each online Haiku poem generator one by one. 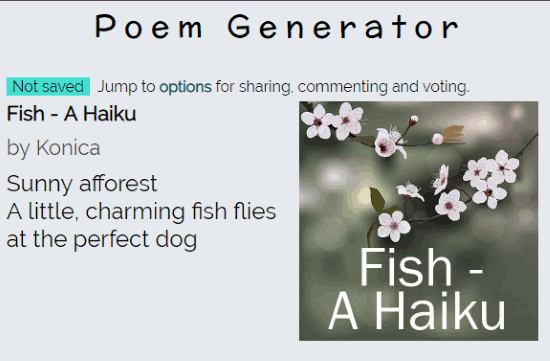 Poem Generator is one of the best poem generators. You can create poems of different forms such as Haiku, Free verse, Acrostic, Limerick, Sonnet, Rhyming couplet, etc.

In order to create a good Haiku poem, you need to fill a form with random words. The words can be entered on the basis of the statement mentioned above the empty box. You can add words that consist of adjectives, verbs, singular nouns. Also, you can use suggestions for word ideas. You can mention your pen name as well.

After that, you can generate the poem by clicking on Write me a poem.

Poem of Quotes is a free website to create Haiku poem online. This is a simple poem generator where you can enter just two singular words. The first word should be the word for your poem’s title. This word revolves around your Haiku poem. After entering the first word, you can go to the next step. And the second word should be related to the main topic which you have selected as your first singular word. After that, you can generate the poem.

Once the poem is created, you can edit its words right there in the generator. In this way, you can make your Haiku poem perfect to you.

3. Language is a Virus 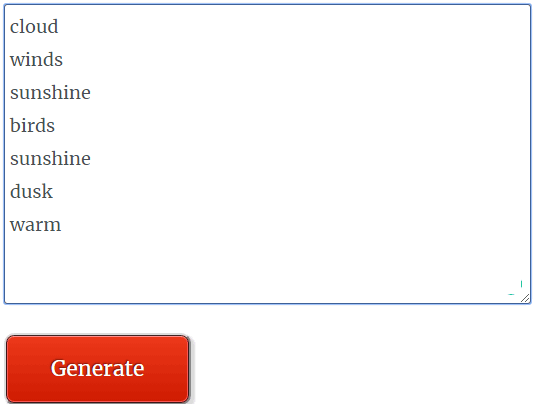 The website called Language is a Virus is a free online haiku poem generator. The site has a poetry section which includes rhyming dictionary and guidance related to the poem or poetry. You can create poetry games as well such as Madlibs, Haiku Madlibs, etc. The site lets you generate poetry of almost all types of poem form.

To create an interactive Haiku poem, you can enter your text in the empty Haiku generator box. The text can be just a word or multiple words. The maximum limit of dropping down the text is 1300 characters. Once you mention a few words, you can hit the Generate button. After that, you will see the different results of your generated Haiku poem. And the poem consists of all the words you have mentioned in the empty generator. 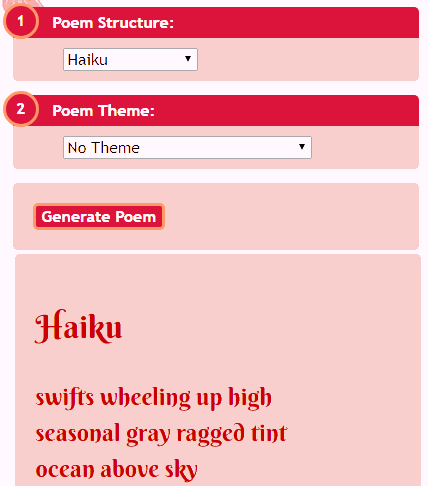 Name generator fun is another free website that lets you create a Haiku poem online. The site has a great visual appeal. You can create random poems by using this poem generator such as Sedoka, Haiku, Tanka, etc.

In order to generate Haiku poems, you need to follow two simple steps. Just select the poem structure from the dropdown. The generator lets you create a different form of poems such as Tanka, Katauta, Nonet, Lanturne, Clarity Pyramid, Quinzaine, and Sedoka. The next step is to select a poem theme such as The Cloud, The Elephant, and the Albatross, Pennyslyvania’99 or you can choose No theme. After following these two steps, you can click on Generate Poem. 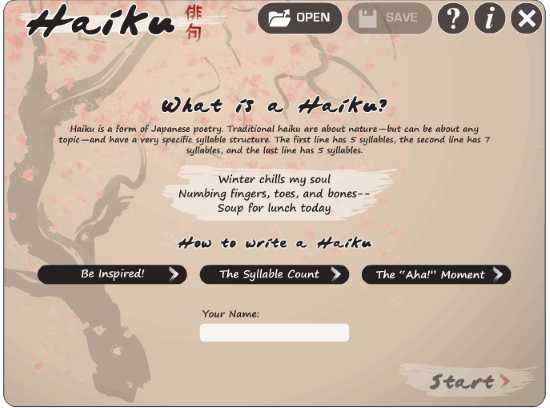 ReadWriteThink is an online Haiku poem generator. You have to mention a few details in order to create a Haiku poem.

The very first thing you need to do is to specify your name and click Start button. Then on the next step, you have to mention a list of words including syllables in the boxes. You can enter 8 words with their syllables. After that, you can mention the title of the poem. Also, you will see three lines where you can mention words on the basis of syllables. The Haiku has a syllable count as 5-7-5. So, you have to enter words intelligently according to the syllables. And then, hit the Next button to create your Haiku poem.

The poem generator lets you save the poem. Besides that, you can change the poem fonts and background. The background image can be used from the 6 backgrounds in the generator or you can add images from your computer.

I personally like Poem Generator as it lets you create poems in different forms such as Limerick, Sonnets including Haiku. All the above-mentioned poem generators are very easy to use. You may try these sites and create poems in Haiku form.