Here is a fantastic add-on for Firefox, named Reddit Inbox Revamp, and its name pretty much clears what this add-on does. It provides an enhanced and improved Inbox for Reddit. Those who use Reddit Inbox daily to send and receive private messages (PMs), this is indeed a good add-on. Instead of dealing with cluttered UI, it presents you a much better interface that you can use to send and receive messages on Reddit. It doesn’t make changes in the original Inbox, rather it provides a separate UI to use as your Reddit Inbox.

Apart from this, it comes with the search box to easily find an email and thread, which is not available in original Reddit Inbox. Moreover, you can also organize messages in a better way. It has three different labels: Inbox, Saved, and Deleted, which are self-explanatory. Although deleting the PMs from Reddit Inbox is not possible, but you can do the same using the new Inbox UI. 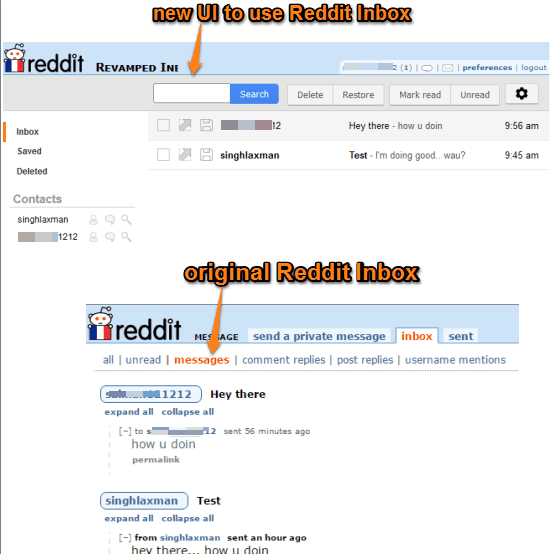 Above screenshot shows the original Reddit Inbox and new Inbox for Reddit provided by this Firefox add-on.

The add-on is in the alpha version currently but worked very well for me.

We have also reviewed 6 free Reddit desktop clients for you.

Install This Firefox Add-On To Get A Much Better Interface for Reddit Inbox:

Use this link to open the homepage of this Firefox add-on and install it. After installation, log in to your Reddit account. You will notice a chat icon is added just before the message icon.

Click that icon and it will start indexing all your messages. When it has done indexing the messages, you will see a Gmail-like interface to view messages available in your Reddit Inbox. Now you can read a message and also give the reply.

You can also select messages and take actions. For example, you can delete messages, mark them read, unread, and also save them. Deleting the messages doesn’t actually delete them from your original Inbox, it just shows that the messages are moved to Deleted label. It helps you to organize emails. You can also restore the deleted messages to Inbox whenever you want.

Apart from this, it also shows the list of contacts at left section who have sent you messages. For each individual contact, it gives you options to show messages of that particular user, send him/her a message, and view the profile, which you can use according to your requirement.

It is really interesting to use this Firefox add-on, because instead of a boring interface, an enhanced inbox for Reddit is provided by this add-on. Searching the messages and organizing them becomes very easy with this add-on.