Phototheca is a free photo organizer that let’s you view, sort, and organize thousands of photos. You can use Phototheca to organize your photos, view them on calendar, keep them in albums, and tag them with keywords for instant search.

Phototheca is a Windows software that include several features similar to iPhoto for MAC. You can use Phototheca as an alternative of  iPhoto in Windows OS. You can import thousands of photos in Phototheca and it will handle all of them with no hangs or time delays. It provides a lot of features to easily manage plenty of your photos.

Apart from that, it also helps in detecting duplicate photos on your PC and further let’s you hide private photos in safety locker.

To organize photos using Phototheca, you should import them first to it’s Library. When you import photos from different folders present on your system’s hard drives, it actually remembers the location of every photo. This helps in easily organizing photos within the library, without moving them from their original location.

Phototheca lets you beautifully organize your photos based on events, smart albums, and tagged keywords. 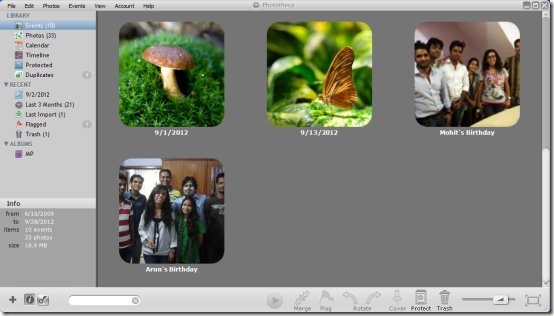 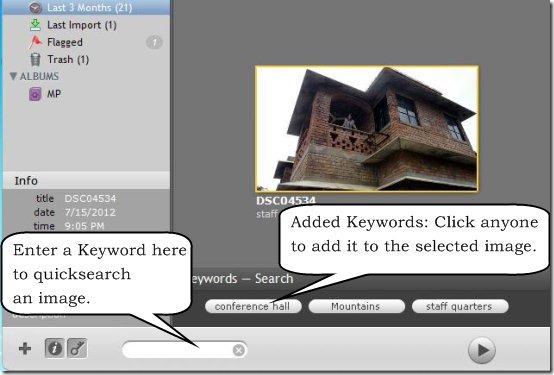 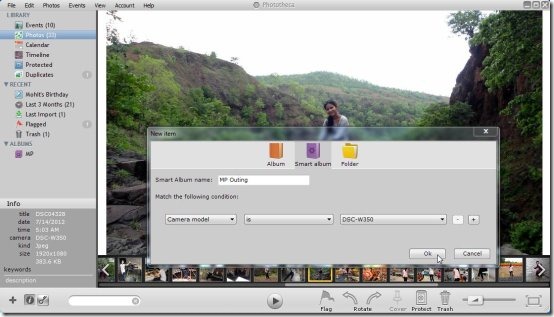 Phototheca is a nice Photo organizer software to organize photos. It provides great features to easily manage thousands of photos, but I think it would have been better if it provided a solution to organize photos on your system hard disk itself  instead of the virtual environment of it’s own library.

Although it does not harm in anyway by keeping the organized photos in it’s own library, but some of it’s features seems to be unrealistic with this kind of organization. Like you can keep your private photos in safe lockers, but other people may access them from their actual location unless you encrypt the photos. All in all, it’s a nice and easy to use software, that could be a good replacement for iPhoto in Windows.