Argument Wars is a free online game to evaluate reasoning ability of students. In this game, you have to play as a lawyer and try to win the case in Supreme Court using your reasoning ability. The game is a part of a learning website for students known as Playfully. The website also has 2 more games but in this article, I will focus only on the Argument Wars game.

The game includes different cases based on US Constitutional Rights so it can also be used for learning the US laws. According to game’s description page, the game also helps students learn the role of US Supreme Court in forming the constitutional rights. In a way, your students will also get to learn what are the US Constitutional laws and why they have been given to US Citizens. 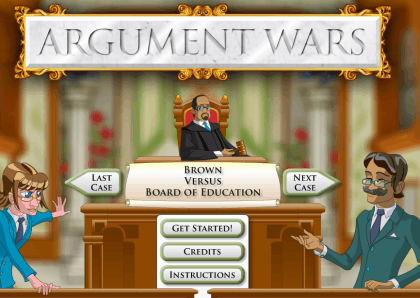 Gameplay of this Free Online Game to Evaluate Reasoning Ability of Students:

When you have got all this, click on Argument Wars game option to get the interface shown above. From here, you can choose the case in which you want to participate. When you have chosen the case, click on Get Started! to play the game.

The next step is to choose the character and give it a name of your choice. 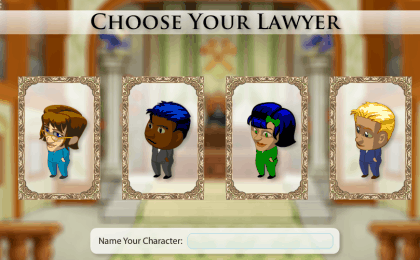 After this the game will start. Now, you will have to argue in the court to prove your point to judge and to contradict the statements of the opposing lawyer. See the screenshot below. You can see that the two Blue and Red colored box at top display the last argument made by you and opponent lawyer respectively. 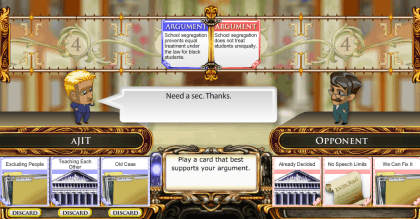 You can also see that there are three cards, just below your character. Click on each of these cards to see the argument written over it. After checking them, you have to choose the best argument which will make your point stronger. You earn points depending upon the quality of the argument as per the current situation of the court.

Similarly, when your opponent lawyer makes any argument then you can choose to let it pass or raise an objection to it. But be careful, as for each wrong objection, you lose points. 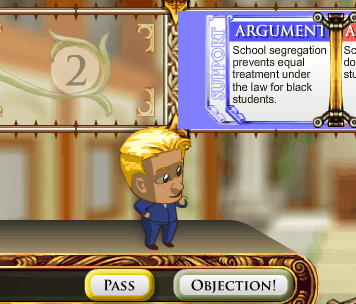 In this manner, you have to earn more points than your opponent to win the case. 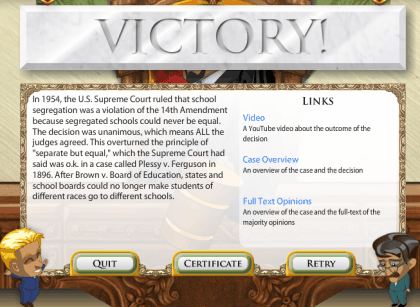 You may also like: 5 Websites to Learn Spanish Online.

Argument Wars is a good online game to evaluate reasoning ability of students. The game makes students to behave like fighting a real case and arguing in a real court. It makes them to know the power of reasoning ability,  US Constitutional laws, etc..