In this post, I will demonstrate how to display currently playing song from Spotify, iTunes in menu bar of MAC OS X. There is a tiny app for MAC app called, Menubar-Ticker which lets you do that. It gets integrated in the menu-bar of MAC and displays the name of current song and artist right in the menu bar. And it supports music players like iTunes, Spotify, and Rdio. It automatically detects the currently opened music player and then displays the currently playing song in the menu bar.

Seeing the current song right in menu-bar helps you quickly see the song name without opening Spotify. This is useful when you’re listening to someone else’s playlist and you like a song then you will not have to peek into Spotify to see its name. You can easily see its name along with its artist right from the menu bar. By default, it keeps running in the menu bar until you quit it. And it only displays the name of song when there is a song actually playing in any of the supported player.

How to Display Currently Playing Song in Spotify, iTunes in Menu bar of MAC?

Menubar-Ticker is an open source tool that shows currently playing song from Spotify in menu bar. If you want to get its source code then you can find that on its GitHub page. Also, the app is easy to install and use. However, since this app from an unregistered developer, your MAC will block it from opening. But you can allow it from the security settings.

So, simply grab the latest release of this tool from here. After that, extract the TAR archive and find the “Menu Bar Ticker.app” file. To install it, simply place it in the Application folder. After that, you can run it and if your MAC blocks it then allow it from the “Security & Privacy” section of the System preferences. 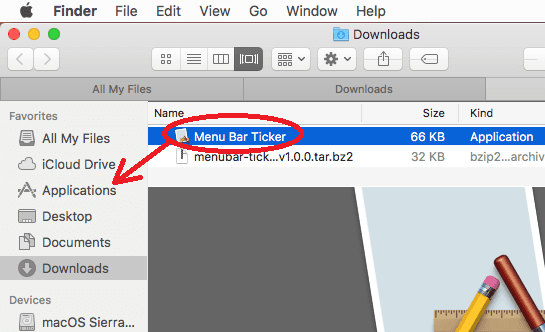 Now, when you have run it, then a music icon will appear in the menu bar. After that, you can start playing a song in Spotify or iTunes. It will quickly grab the song’s name and artist of the song. And you can see that right in the menu bar. As you pause the playback then the name will disappear immediately. See the screenshot below. 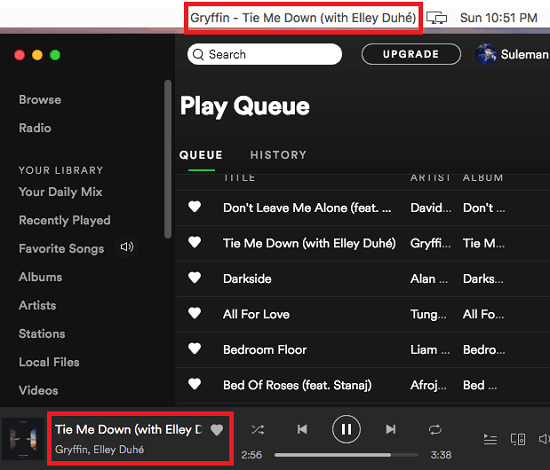 That is how Menubar-Ticker apps works to display currently playing song in MAC OS X’s menu bar. You can easily install it and use in on your MAC. You will just have to allow it from the security settings if your default settings prevents unauthorised app from executing.

Menubar-Ticker is a nice and simple app that displays the current playing song in OS X’ s menu bar. And it does what is says. You can anytime see the artist and name of the song without opening Spotify or iTunes. You just have to install it once and then see the song name always in your menubar. And when you don’t feel like using it then you can simply quit it.