It is lot of fun to play this snowboarding game. You move your snowboarder by tilting your phone, and you perform stunts by swiping finger across the screen.

This snowboarding game for iPhone also has practice mode so that you can prepare yourself for the competitions in advance and thus win them. You can choose from different avatars and snowboards for playing this snowboarding game. The game offers really cool tracks full of turns, slopes and mountains which makes it total fun and entertainment to play the game. The game maintains an overall leaderboard from where you can track your progress in tournament and events easily. The game also lets you view your Career Statistics so that you can check how well are you playing the game. 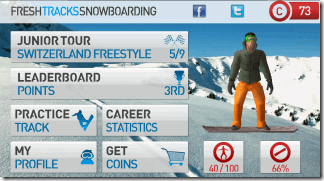 Gameplay of this iPhone Snowboarding Game:

Fresh Tracks Snowboarding has a simple gameplay. In this game, you start as a Junior player and you have to win different tournaments and events in your journey to become the next big thing in the world of Snowboarding. There are following levels of tournaments: Junior Tour, Amateur Tour, Pro Tour, and Prestige Tour.

On the launch of the game, you are required to select an avatar and give it a name. The name selected by you is used to represent you in the game in each of the tournament and event that you will play. After this, you will see the main home screen of the game. 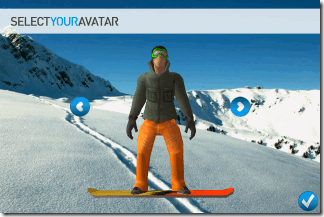 Controls of this iPhone Snowboarding Game:

The controls of this game are very easy to understand and master. While playing any tournament, you will find four options on the screen with two each on both sides. The controls on the left side are for making your player jump and to apply the brake, while the controls on the right are for accelerating. To guide your player to move on the track, you need to tilt your iPhone. Similarly, you can perform various tricks and stunts by swiping your finger on the screen in different directions. Following this control, try to achieve the target set before you for winning the tournament and proceed in the game. 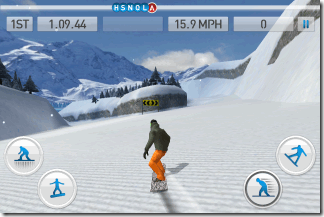 You may also like following Skating games for Android and Windows 8 reviewed by us.

Fresh Tracks Snowboarding is a very good iPhone snowboarding game. The game works smoothly without any lags. It also has good graphics and music, which keep you engaged for a long time. This app is surely worth a try, especially if you like snowboarding.