Video Chapters play an important role when you want to jump to a specific part of the video. Though, you can use video bookmarks, they are not permanent. Video chapters are embedded in the video files themselves as metadata. And with these software, you can edit them. These software make is very easy to edit, create, and delete video chapters from video and also you can import/export them. 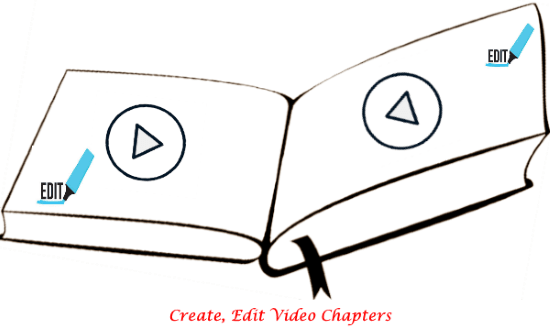 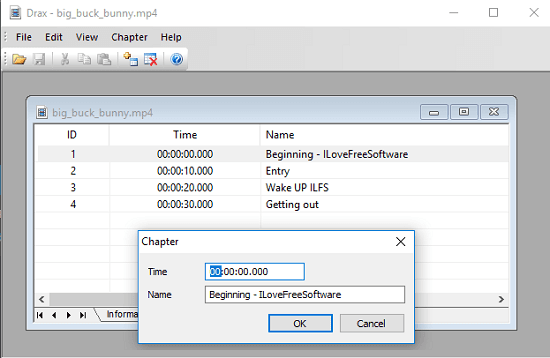 Drax is a free software to add chapters to MP4 videos as well as it can edit the chapters in that. Apart from MP4 videos, it supports M4V videos as well. You can explore the video meta data along with the chapter details. It lists all the chapters that are available in the video and you can edit them. It also allows you to import chapters and save changes in the video itself. You can easily edit the video chapters using this software. Just open chapters, specify the time and titles and save that. That is all you have to do when you are using this software.

After installing Drax, open it and load the target video MP4 file whose chapters you want to edit. After opening the video, go to the Chapters section and you will see all the chapters which are already present in the video. Click on any chapter to edit its title and timing details. Or, you can also create new chapter there and add relevant information in it. Use the Add Chapter button from the toolbar of the software to do that. In addition to all this, you can also import chapter from a TXT file if you have one. After you have manipulated the chapters you can save changes in the video you just imported. 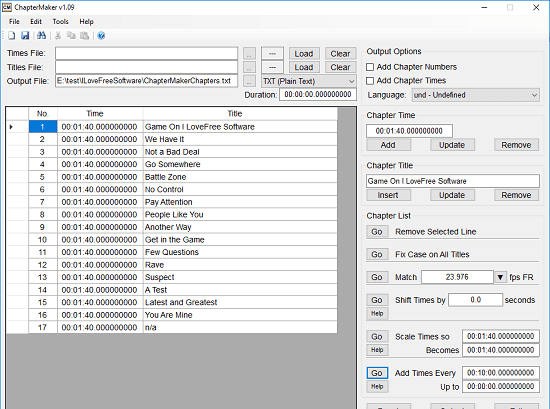 Chapter Maker is another free software to edit video chapters. The software mainly focuses on creation and editing of chapter files of different formats. It supports TXT, XML, OGG or OGM like formats of chapter files to edit them. Also, if you want to create a chapter file for a video from scratch, then you can do that. And the best part is that it comes with support of ChapterDB that you can use to download chapter file of any movie you like. Of course, you can modify that too later if you want to. However, it does not support directly embedding chapters in a video file like Drax does. It can only save a chapter after editing them as a file that it supports.

Chapter Maker software comes with an intuitive interface that you can use to easily edit the chapter files. First, import your chapter times and titles file in the software separately. And if you don’t have both of them then you can use a single file to manage chapters. After that, it will list all the chapter on its interface. You can select any row to delete if you want. To edit the value of a filed, simply click on it and then you can specify the corresponding details in that easily.

Use the various options and controls that it shows on the right side of the software. And if you want to download chapters for a specific movie, then you can use ChapterDB to do that. The option is available in the Tools menu of the software. So, edit the chapters and save them to a file. That’s all you can do with this software.