Here is a list of 4 free iPhone apps to manage multiple social accounts with ease. These apps act as your universal hub for all your social activities be it reading posts or posting new posts.

We spend a higher portion of our time visiting various social networking websites which can be really tiresome if we have to access them individually. But with these apps, you can access all your networks from a single place which will save your time as well as increase your productivity. These apps can help you work smartly and efficiently. These apps let you access Facebook, Twitter, Instagram, LinkedIn, Foursquare, Google+, etc. Each of the app is unique in terms of the features offered by them.

So, lets check each one of them one by one. 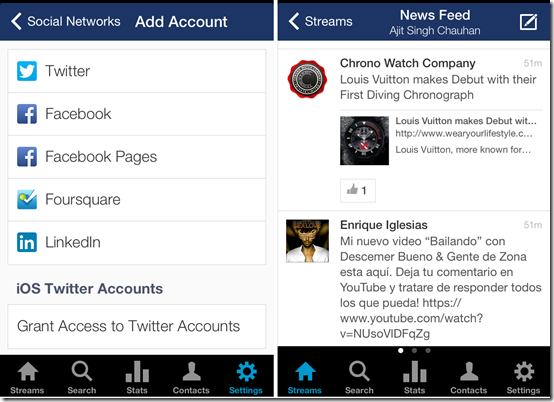 Hootsuite for Twitter & Facebook is one of the most popular iPhone app to manage multiple social accounts. The name of the app suggests that this app lets you manage only Facebook and Twitter, but in reality you can also manage Facebook Pages, LinkedIn and Foursquare accounts with this app. The app lets you check following updates:

Besides this, the app lets you check Trending, Nearby, and Recent Tweets from Twitter. You can also post updates on any or all of the networks simultaneously. 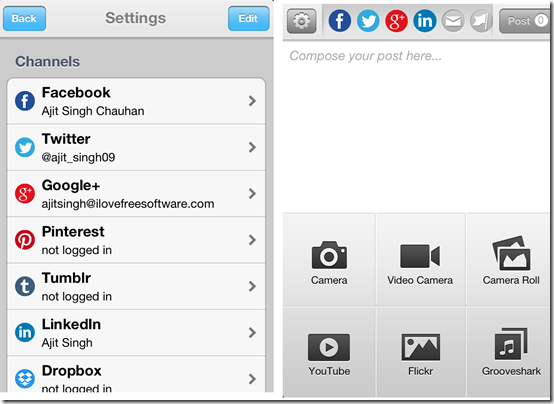 The next app for managing multiple social accounts is Everypost for Twitter, Facebook & Google+. The main aim of the app is to post on multiple social networks simultaneously and that too without complications or hassles. The app lets you post on following social accounts: Facebook, Twitter, Google+, Pinterest, Tumblr, LinkedIn, DropBox, and any email service. You can post photos and videos with in-built support for YouTube, Flickr, and Grooveshark. While posting photos, you can choose the quality of the photo from 1MP to 5MP with support for URL shortening. 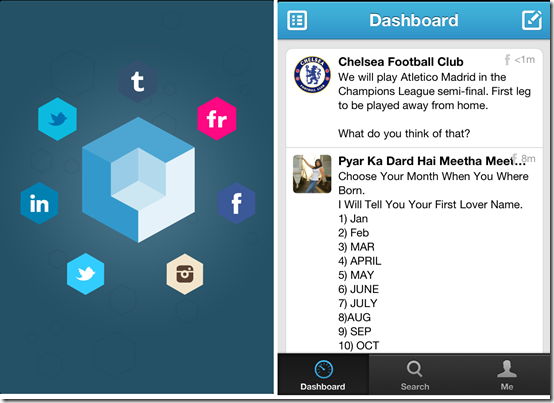 The third app in the list is Cubenect. This app lets you manage Facebook, Twitter, Instagram, Tumblr, Flickr, Foursquare, and LinkedIn. The best part of the app is that it lets you choose the accounts whose feeds and updates you want to see on the dashboard. You can also post status or updates on multiple social accounts from an universal message composer with character limit set up to 500. It means that you will not be disturbed by the normal 140 character limit of normal apps. The app lets you tag people in post, add places, photos and add hashtags to your updates. 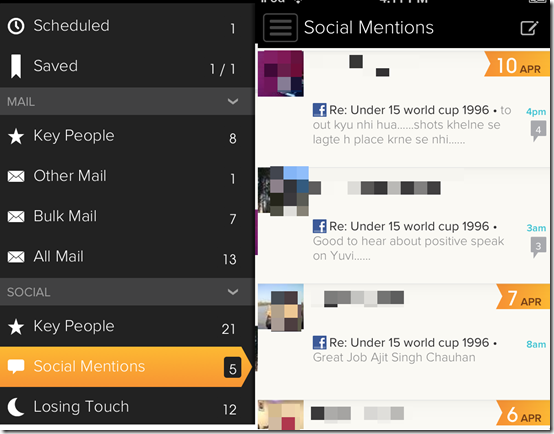 The Cloze app is a very powerful app for managing your social accounts with lots of features and tools available. The app lets you manage Twitter, Facebook, LinkedIn, and email accounts. The unique feature of the app is that it also lets you schedule post for your social networks. The app has 140 characters limit for Twitter, 2000 characters for Facebook, and 700 for LinkedIn. You can also check key people (both in mail/social accounts), Social mentions, Losing Touch, Life Events, and all social people.

You can also tap on anyone’s profile to check his/her Cloze Score. The Cloze score ranges between 0 to 99 and its calculated on the basis of Dormancy, Frequency, Responsiveness, Privacy, Freshness, and Balance in the profile.

These were the 4 free iPhone apps to manage multiple social accounts with ease. Just check them out and save your precious time for better things like your family and friends. Do mention the name of the app which you liked the most.