This article explains how to get Pixel 4 camera app on older Pixel phones. As you might know, Pixel is a phone lineup actually manufactured by Google which runs the stock Android OS. Pixel 4 is the latest phone in the lineup which is going to be released on September 15th. The phone is already leaked online so many times and it packs new camera features over the last generation.

Whenever Google launches a new Pixel device, it keeps some features (software-based) exclusive to the new device and made some of them available to other Pixel phones later. As per the leaks, the new Pixel 4 will have an improved Camera app with slightly tuned layout and new features. The Camera app of Pixel 4 is leaked online which you can download and install on older Pixel phones and check out the new features. This app is a “Dogfood” build which is a code name for internal Google testing. It works with all the Pixel phones and might also work on other Android One and stock Android phones.

Also read: How to use Focus Mode on Android 10?

The new Camera app goes by the name Google Camera 7 since it’s the 7th version. It is available on APK Mirror with lots of mirrors all around the internet. So, you can either grab the APK from APK Mirror or just google the name to get other mirrors.

Once you have the APK on your phone simply tap it to install. Depending on the app you use, it might prompt for permissions to install apps from Unknown Sources. Allow that permission to the app and install the camera. Do note that, this new camera app will replace the default Google Camera app on your phone. 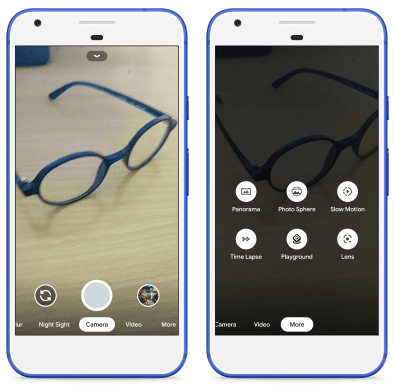 The first thing you notice in the new camera app is that the UI is slightly tweaked and look a lot cleaner with no camera options at the top. By default, the app opens in 8:9 aspect ratio and viewfinder covers the whole screen. You can change it to 18:9 from the app settings if you want. Another visual change is that all the camera modes are moved below the shutter button. From there, you can scroll through the different camera modes and access the Playground and Lens feature as usual from the More section. 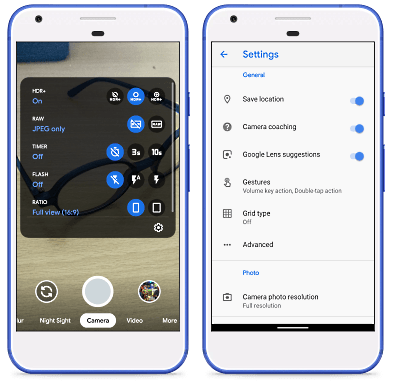 The camera options such as Flash, HDR, RAW, and Ratio are hidden which you can access by a swipe down on the screen. The app setting is also moved here from the More section. The rest of the options are the same. Night mode seems to be slightly better than the preview versions but there is no sign of the new “Astrophotography Mode” in this app.

With this leaked Pixel 4 Camera app, you can test the upcoming camera features on your older Pixel phones. This app works with all the older Pixel devices. I also get it to work on Nokia 7 Plus which runs on Android One. So, there are chances that it might work with other Android One or stock Android devices. This app replaces the default camera app on your phone. If it’s lag or doesn’t work, simply uninstall the update from Camera App Settings and update to the latest version from Play Store.