Ultimate Duplicate Music/Video Finder is a free Windows 8 duplicate music file finder app, which can find duplicates of music files, as well as video files. This is one handy Windows 8 music & video app, that can even find the duplicates of the music and video files that have different names and even extensions, that is, file formats. The app advertises that, it makes a binary comparison between the files, in order to find a valid duplicate of the original. And after finding the duplicates, the app also has the feature of moving all duplicate files to a folder “MusicVideoDuplicates” from where, you can then delete the duplicates, in one go.

However, these two later features, that is moving duplicates to one folder and deleting them, comes with the paid version. Which you can unlock for few bucks. But, even without these two, the app is pretty much practical and useful. And, if you like it this way, then you can use it just as it is. 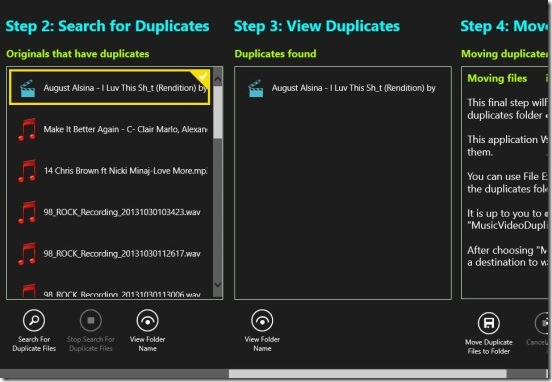 The app is a well made and handy Windows 8 app. It gives you a minimalist medium to quickly find the music and video files duplicates and then trace their locations. However it only checks for the files, that are stored locally in your Windows 8 devices. Including a feature to scan the SkyDrive files and folders, can be a good update for the app. Still, it’s pretty much helpful in removing the extra video and audio files from your Windows 8 devices, and lighting up the hard disk. 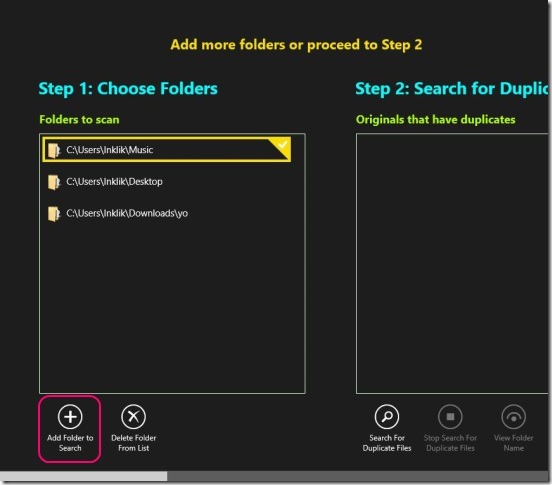 All that the app requires from you is, to perform 3 simple steps. The first is to add the source folder and other folders, that you think has the duplicates. Good thing is, the app can scan the sub-folders of a folder for duplicate files. Also, you can add as many folders in the scan list, as you want. When you are done adding up the folders, move to step two, Search for Duplicate files. 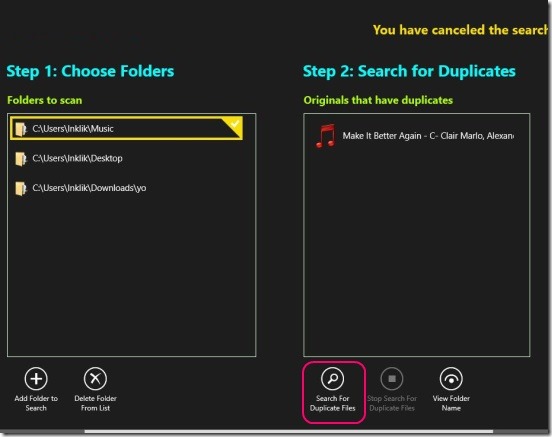 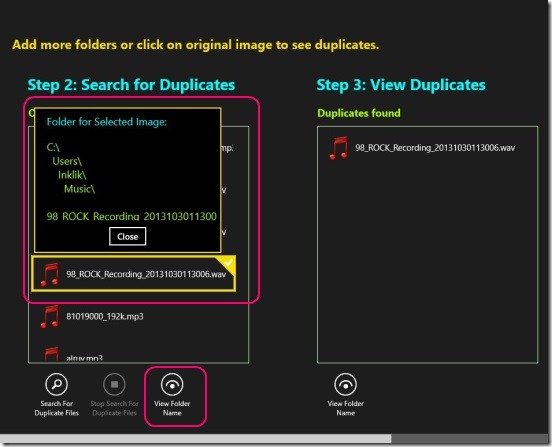 One good thing is, the app lets you view the path to the directory of all the duplicates and the original file, within the app itself. Simply, select the file and click on View Folder Name button. Now, this feature is quite good, using it, you can manually go to the folder and then delete them.

The best feature of the app is, it’s scanning ability. It scans and finds duplicates even if, their names are different, and so goes for extensions, provided they are audio and video files.

You might also like checking out these good similar Windows 8 apps: Free Remove Duplicates and File Lister.