Radionomy, as the name suggests is a free online radio app for Windows 8. With this app you can listen to thousands of both mainstream radio stations as well as the non mainstream stations (made by Radionomy users who have their account in it’s official website and have made a station by themselves). There are a wide variety of unique stations, and each containing almost every music genre. Along with genre there are various theme based music stations such as cinema, political, sports, relaxation, talk etc.

Radionomy is already a popular free global service to listen online radios , it allows it’s users to create, broadcast, and promote their own online radio stations for free. It already has prominent versions for Android, iPhone, and Windows Phone, and now it is available in Windows 8 app version as well.

You can get this free app under Music & Video Category in Windows Store. 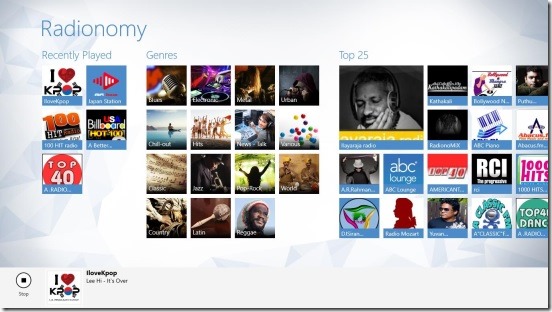 This app version of Radionomy is a well made version of the original. It’s functional and completely does what it advertises. Though the app supports a huge range of stations, nearly more than 7000; still the app manages to stay clean. The background is eye soothing, and the stations are shown in tiles view having their respective covers. When you launch the app, you’ll get the Main Screen of the Radionomy, which contains three catalogs, and they are: Recently Played, Genre, and Top 25. These three catalogs are sufficient enough to find and listen to your favorite station. You won’t find the Recently Played catalog at the beginning, but after you start listening to stations, it gets added in the Main screen. This catalog helps in quickly playing the station which you were previously listening to and as obvious it is the station that you like. 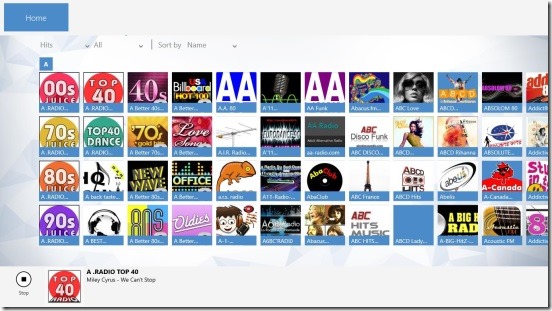 The Genre catalog contains every music genre available out there, simply click on the desired genre and it will take you to that particular genre’s screen, showing all the radio stations under it, and arranged in alphabetical order. Beside these two catalogs you’ll also find the TOP 25 stations within the app. This helps in listening what other people are listening, and quickly understanding their tastes. 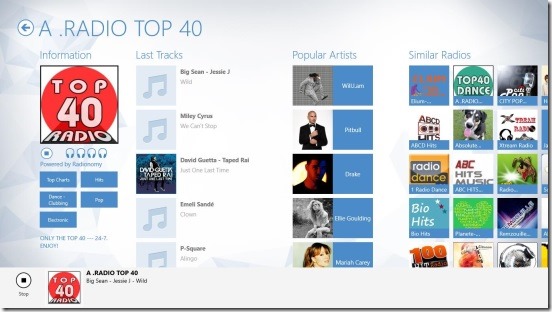 Listening to radio with Radionomy is a good experience. When you are listening to a station, the app also shows the song title and the artist of the current track. Plus, it also shows the last five played songs, popular artists, and a list of Similar Radios. There are just two buttons for radio playback, and they are Play and Stop, which are totally sufficient, as you don’t need to pause, fast forward or revert backward, because it’s a radio! One good feature of the app is, you can play or stop the currently playing station from any screen of the app by just right clicking on the screen. 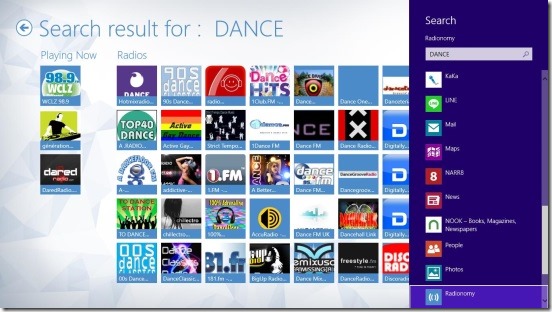 Note: in order to get logged in, open the Windows Settings Charm (Win + I combo) within the app.

Radionomy is a wonderful app to listen to online radio. It helps in discovering new artists. Listen to what the people at the other side of world are listening to. If you don’t like track, you can quickly switch to another station which is playing your favorite track. Only thing missing is pinning favorite station to start screen. Besides that, it’s an utterly functional free radio app.