Radyo for Windows 8 is a completely free app that allows you to listen to radio stations of different regions with complete ease and simplicity. This radio app for Windows 8 even allows you to record the audio that is playing; this is the apps most impressive feature. Also you can arrange the station that you like by selecting them as favorites in the app. The small downside of Radyo for Windows 8 is that the app only provides you with six countries to choose and play stations from after that you will have to pay to add more countries. But for the average user 6 nations is good enough. So try out and listen to stations from all over the world for free.

You can download Radyo from link posted at the very end of this post. The link will automatically re-direct you to the Windows Store from where you can download and install Radyo onto your Windows 8 device. After installation just run it and you will have the interface in front of you as shown below in the screenshot. 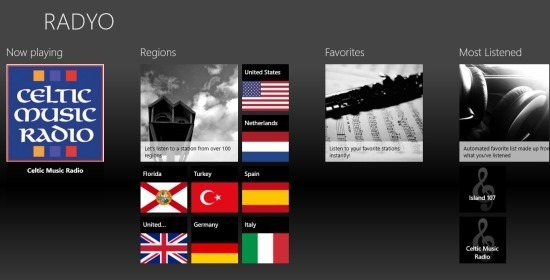 You can see that the main interface of the app has the typical horizontally scrolling layout. The main interface of the app shows you the now playing song, regions, your favorites, most listened to station, song history, recordings etc. In this manner you can interact with the different options that are provided by the app in a simple and easy to understand interface. To start listing to songs simply click on the region tile from the main interface and you will have the interface in front of you as shown below in the screenshot. Here you are shown all the flags of nations whose radio stations you can listen to. By default you will be able to access 3 nation and you can add 3 more of your own choice this is the limitation of the free version of the app. And this is good enough for most of the users. 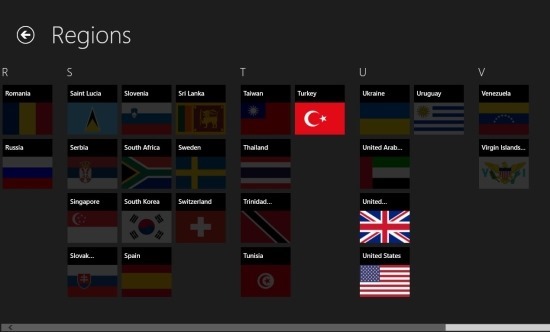 When you run a particular station playing you will have the interface in front of you as shown below. Here you will be able to see and interact with the radio station that is being played. The app provides you with option like ability to add for favorite, pin the radio station, get the web link, control volume, record audio etc. If you have recorded some thing using the record option provided in the app it will appear in the recording section of the main interface and from there you may play the programs that you have recorded. 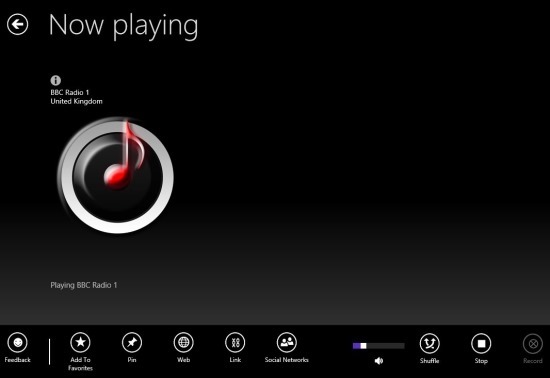