This post talks about one of the best free Sandbox software ever made, Sandboxie. Sophos that acquired Sandboxie, quite some time ago has now decided to distribute the software as freeware. They are even planning to open source it in near future. So, if you know about the limitations of Sandboxie in free tier, then they no longer exist now. You can now enjoy the paid features of Sandboxie for absolutely at no cost. And one of those features is that it can auto run any program in sandbox. You only create program rules to run specified programs or programs matching certain criteria in sandbox automatically.

In case, you don’t know what a sandbox is or what Sandboxie is, don’t worry. A sandbox is a program that isolates a part of a hard disk and then runs a program in that isolated space. Running a program in an isolated environment ensures that the running program won’t be able to interact with the data or services outside the sandbox. This concept of isolation is very helpful in dealing with viruses. A virus downloaded from a browser running inside a sandbox won’t be able harm the computer, because the area of impact is only the hard disk space reserved by the sandbox and it can’t leave that. However, this won’t be the case where browser is running without sandbox.

How to Force Programs to Run in Sandbox Automatically with Sandboxie Free?

We have already covered all about this Sandboxie software in a separate post here. You can go through that post and then read about all the basics. Here I will only tell you how to use Sandboxie to force programs to run in sandbox. To start with this software, you download it and then run it. Create any number of sandboxes in it and then you can simply open the sandbox settings.

Basically here you can either add the programs that you want to run automatically in sandbox. Or, you can specify “Forced Folders”. In forced folders, you basically specify the location son hard disk that contains some programs and you want to run them in sandbox automatically. You can specify these settings for every sandbox that you create in the Sandboxie software. To add a program by name or adding forced folders, you open the sandbox settings. To do this, open settings from the Sandbox> YourSandboxName > Sandbox Settings menu. 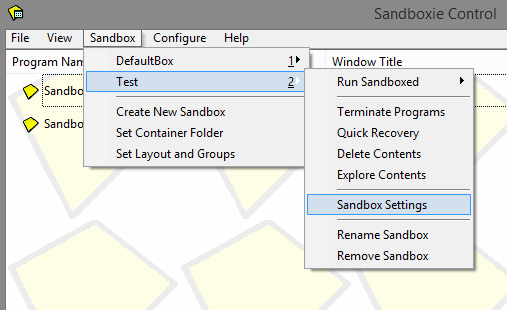 After when the dialog opens, you go to the “Programs Start” option and you will see the two options there to configure forced programs –namely “Forced Folders” and “Forced Programs“. In the “Forced Folders”, you specify the locations that contain the programs you want to run in Sandbox automatically. And in the “Forced Programs”, you directly specify the programs by locating them on the hard disk. 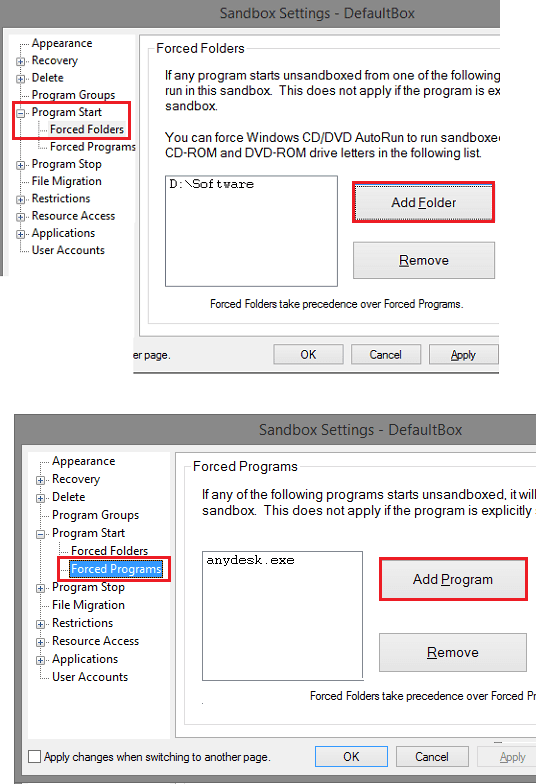 Now, you simply save the changes and let the settings take effect. It will refresh the sandbox configuration and then start working accordingly. Now, whenever you will run any program that you have specified in the forced folders or forced programs section, it will run in sandbox. You just have to make sure that Sandboxie is running in the system tray before launching any program. You can see this behavior in the GIF I have added in the beginning.

This is very interesting news that now you can enjoy all the paid features of Sandboxie for free. I have used Sandboxie a lot, and I am very excited to know that this legendary software is going to be open sourced as well. So, if you want to try out the new Sandboxie freeware with the previous paid features then you are welcome to do so. Just download it from below and let me know what you think.