Tap the blocks is a free Windows 10 match 2 game app where you have to match 2 or more same blocks to wipe them off the game board. The game has awesome graphics. You need to eliminate group of 2 or more same colored blocks by clicking on them. Keep clicking and don’t let the blocks fall in the abyss. There is a timer on each game, so hold on till the game timer runs out. The evil shaman will keep on throwing blocks on the game board and you have to make sure they don’t fall off in to the abyss, other wise you will lose a life.

Tap the blocks game can be downloaded from the Windows 10 store or from the link given at the end of this article. When you start the app you will come across a interface like the one shown in the screenshot below. 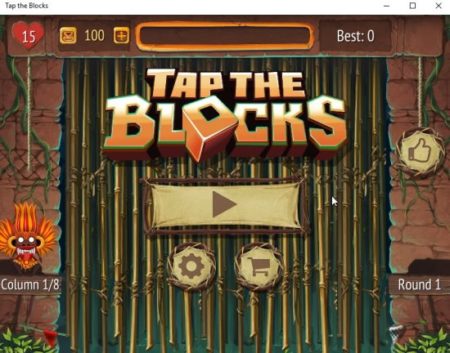 In the above screenshot click on the play button to start the game. Firstly you will be asked if you want to go through a small tutorial to understand this game. Go through the tutorial. After that the game round one will begin.

You get 15 life’s as you can see in the top left corner. The round one screenshot can be seen in the screenshot below. 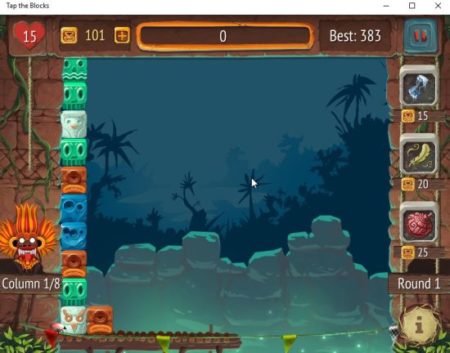 The number of columns still to come is given on the left side below the evil shaman figure. The right side of the screen will show which round you are in. Your score is displayed on the top of the screen and the string on the bottom of the screen is your timer. Very creative timer I must say. There is a insect crawling on this string and once it reaches the end of the string the time runs out.

From time to time golden blocks appear and you can collect them to later exchange them for life’s. As it shows in the screenshot below, you can either buy lives using the golden blocks that you have collected so far or you can even choose to watch a video ad to get more lives. 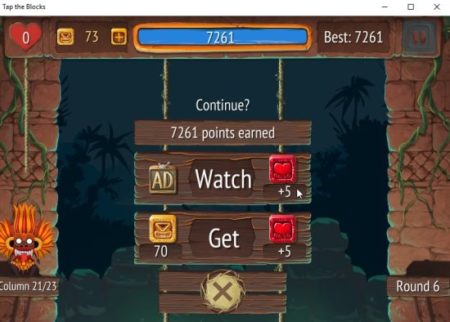 You also have help in form of special boosters on the right side. There are three boosters you have. The ice booster will freeze everything and prevent the tiles from moving for a few seconds. The other two boosters also help you in a similar way by not letting the blocks fall in the abyss.

Tap the blocks is a fun game app which is easy to learn. Have fun matching the blocks and keeping them from falling in to the abyss. Enjoy the beautiful graphics and sound of the app at the same time. The game sounds simple but when you actually start playing it you realize its quite challenging. So go ahead and try it out.

Check out Tap the Blocks for Windows 10 here.