Freeky Balls is a free iPhone game in which you have to hit the balls by moving your head. The app detects your head movement to guide the ball for hitting the targets. Apart from simply hitting the balls, you also need to hit the balls in such a way that the ball hits the targets after reflecting back. These targets will appear on the screen randomly. This feature of sensing the face movement is supported only with iPhone 4S or higher devices. If you don’t have a device matching this criteria, then you can play the game using the Gyroscope of your old device. The Gyroscope lets you play the game by tilting your device to guide the ball and eventually hit the target.

The game comes with 3 different modes and several levels for you to play so that you can enjoy the game to the fullest. You can choose from three avtars for you to play the game. The game can also be synced with your Game Center and Facebook account.

You can get the Freeky Balls for iPhone either by searching on iTunes App Store or by clicking the link given at the end of this review. The main game play of Freeky Balls revolves around 1 boy, 1 girl, and 1 puppy. All these three are also the avtars which you can choose to play the game. All of them have participated in a Freeky Balls Tournament in which the winner will receive 1000 gold coins. So your aim is to play as one of them and help them to reach the pinnacle. You can also switch the avtar anytime in middle of the tournament. 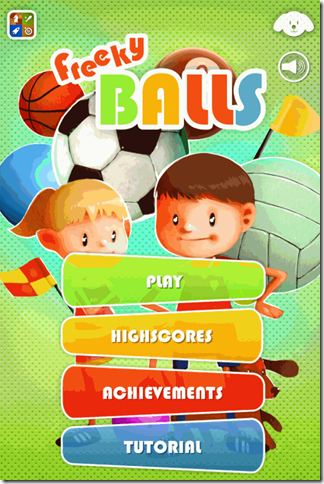 When you start the game, it will tell you the storyline which I have already explained to you above. After the storyline, your first match of the tournament will start. In the match, you will see 3 vessel type structures which will shoot the balls towards you. They also shoots black bomb towards you which are like the villain balls in the game. You need to move your face to move your avtar such that it hits the balls. The balls can be of different types like football, basketball, etc. Your will earn 1 pint for each ball hit. 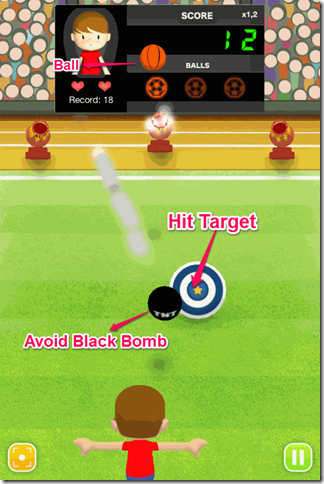 While hitting the balls, you will find random targets appearing on the screen. You need to hit the ball in such a way that the ball hits these targets after reflecting back from colliding your avtar. Each successful hit on target gives you extra points which will  be added to your total score. But while playing the game, do remember that you can’t miss more than 3 balls or hit the black bomb, otherwise you will lose the match. You need to earn the  pre-defined number of points to win the match and proceed to next match. 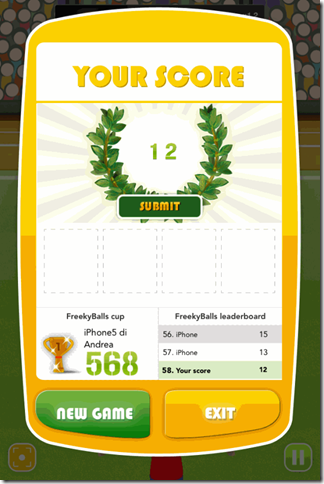 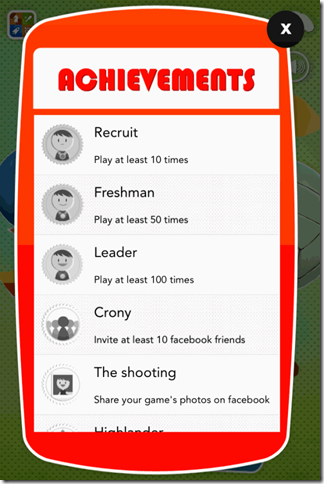 The game also lets you customize the settings before the match. You can choose from 3 difficulty levels: Easy, Medium, and Hard. The app lets you choose that whether you want to play the game using Gyroscope mode or Face mode. You can also set the sensitivity level for both the modes. The level of sensitivity set by you determines the response of the avtar selected by you. 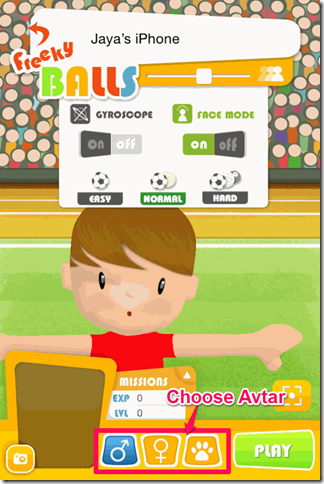 Freeky Balls is a very funny and entertaining game for iPhone with unique feature of sensing the face motion. The game sensed my face movement accurately during my testing of the game. This game can prove to be the next step in the mobile gaming. The color schemes and visual graphics are also awesome. Although you will find hitting the ball using face movement quite difficult but you can master this thing by playing the game regularly or adjusting the sensitivity level. If you are a fan of sensor games or you want to try out unique and new game, then definitely go for this.