Dumb Ways To Die is a free iPhone game in which you have to save characters doing dumb activities from dying. This game is based on the famous Dumb Ways To Die video which was made by Melbourne Metro Department. The video was made to create awareness about not to do dumb activities near the Metro which results in death of many commuters. Your main aim is to save the characters from dying. You get points whenever you save a character. In case, you couldn’t save the character, then you can also tweet about the reason of death. The game also lets you take the Safety Pledge that you will not do such things around the trains. 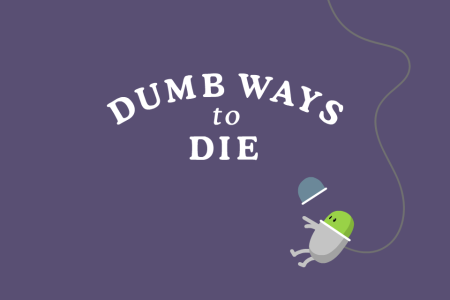 The game Dumb Ways To Die can be downloaded from the App Store by searching for its name or you can click on the link given at the end of this review. The main game play of this game is to prevent different characters from dying. These characters are doing various dumb activities which may result in their death. Some of the dumb activities done by these characters are: Standing ahead of yellow line of Metro with headphones on, crossing the railway track via car even when signal is green, teasing a bear with stick, eating super glue, moving around when blood is oozing out, playing with honeycomb and many more.

Your main aim is to save them from dying from these dumb activities with in a specified time period. You get three lives to play. Each life gets decreased if you fail to save any character. When you save any character, you get points depending upon the time taken to save the character. There are certain targets for you to achieve. You can achieve these targets by reaching the pre-defined points. Whenever you complete a target, one of the characters from original YouTube video gets unlocked. After playing the game and collecting points, the original video also gets unlocked.

Whenever you fail to save any character from dying, then you can also tweet about the reason of his death. The app has an option called Tweet your death. Tap on it to do the tweet. You can also take a pledge from within the app stating that you will not do any dumb stuff near the trains. Tap on the Safety Pledge button on the top right corner of the window which appears after the game is over.

You can also try Shoot The Evil fun game for Windows 8 reviewed by us.

Dumb Ways To Die is a fun game which creates awareness about the dumb activities that are most often done near the trains. You learn about these activities and also how to avoid them through the app. Apart from the awareness point, the game is very much entertaining and will keep you busy for sure. Do try the game once.

Get the Dumb Ways To Die game from here.