It is a handy tool for animators, as motion capture systems are expensive. Using it you can manually add the points, create a stick man type skeletal, and animate it frame by frame. You can create an animation from a scratch, or you can import a video into the freeware and then draw on it and use it as a reference for the animation.

Here is a simple animation I created using this animation creator (note: output below is from a Video to gif software, to convert recorded animation video to gif). 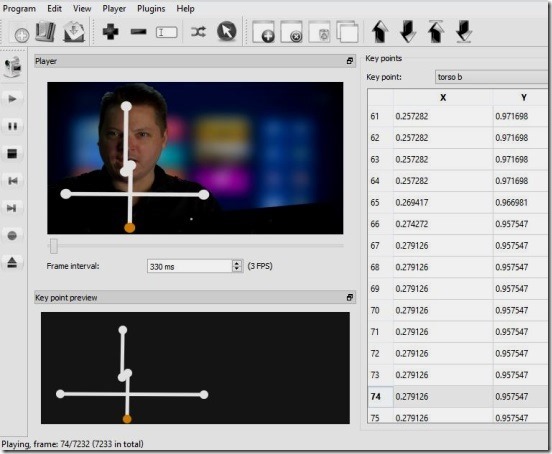 Create, edit, and save skeletal animations using this animation editor:

KPEdit is a good alternative to motion capture systems. Using it you can create some good skeletal animations, that can be later used in 3D animation software. However, the complete process of creating skeletal animation does take time, because you have to create animations part by part. That is, creating animations for hands, legs torso, head  etc. separately and then compiling them together. It’s a long process.

Using the freeware is easy and you can find some video tutorials on how to create animations in KPEdit in it’s website. Like every other animation software, this animation editor is also based on frames and points concept.

You’ll start with adding frames, and then points. There are buttons for these in toolbar. Then, you have to simply change the position of points frame after frame. Good thing is, the freeware lets you view the position  of points in previous frame, making it easy to figure out where to place the points in current frame. To enable it, go to View menu and enable Previous Point Hint option. 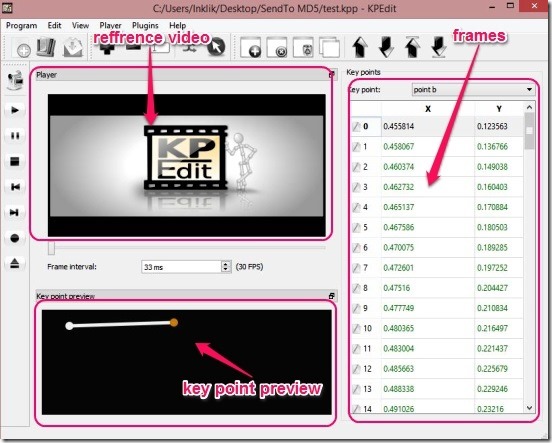 To make use of a video as a reference for the animation, simply import desired video (click Open video button in far left side of interface), add point, play the video, and draw on top of it by continuous clicks. To help you get a proper control over animation drawing, you can slow down the playback speed. Simply enter a suitable playback speed in Frame interval text box and press enter. The freeware automatically creates frames as the video gets played and adds the points you drew, frame after frame.

Finally, simply connect the points (click on Manage Connection in tool bar) to make a final point skeleton, and then preview the animation by clicking on Play button. Use different options present under Plugin menu to make the animation even better. 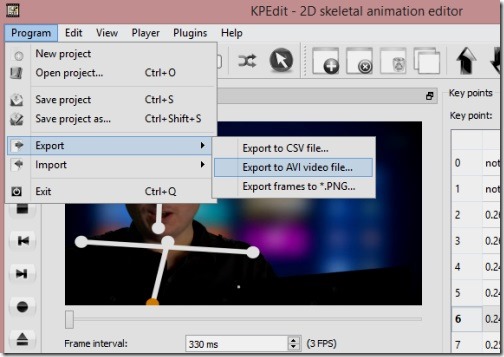 Once done, you can save the project as KPP (KPEdit file), or export it as CSV, avi, or ong file format.

KPEdit is a good skeletal animation editor. It’s functional, small sized, easy to use, and doesn’t uses too many resources. Moreover it’s practical. All in all, worth a try.