FVD Suite is a free Flash video downloader and Flash video converter for downloading,converting and streaming videos/audio from thousands of Flash based social media websites. FVD suite enables media download from websites such as Facebook, Metacafe among many others which present a staggering number of entertaining media online.

FVD Suite provides a host of features to download and convert Flash media files. Features such as choosing the audio device for recording, Converting the media into mobile device compatible formats, Countdown display before recording and an easy-to-use UI have increased the usability quotient of the FVD Suite application. Some other streaming video downloaders are ClickConverter, aTube Catcher, and TubeMaster++. 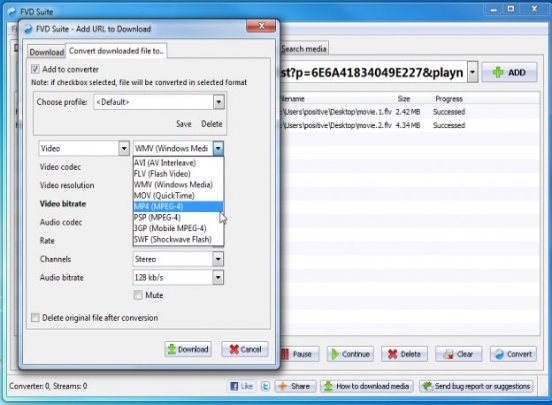 The steps to use FVD suite for downloading media can be listed as:

FVD Suite Flash video downloader can be run on different versions of Windows Operating system such as Windows 7,Vista,XP and 2000. The size being just around 12MB, it can be quickly downloaded from Flashvideodownloader.org and the application setup is quite easy. Plugins for Mozilla Firefox and Internet Explorer browsers are also available.

FVD Suite is becoming popular due to the fact that the media formats supported by the application are being extended. Also the number of websites from which media can be downloaded by using FVD Suite is increasing every day.

FVD Suite enables the user to: