SortOf is a free software that lets you organize files in different folders based on their file types. It quickly sorts multiple files (in a given folder) on the basis of their type and arrange them in different folders with a single mouse click. Sometimes you may have files of different types in a folder (such as text files, images, songs, videos, folders, setups, shortcut icons, etc.) which makes the folder too crowded and messy. So at those times, in place of manually sorting all those files one by one, you can make use of SortOf.

SortOf scans a folder for files, checks their extensions, builds up an organized pattern of folders and then finally organize files based on their types. It creates 9 different folders in total: Archives, Documents, Images, Music, Others, Pictures, Programs, Shortcuts, Videos. After creating the folders, it actually cut-pastes the files in the respective folders. As the name suggests, it can only be used for sorting. You can’t rename, copy, or arrange files using SortOf.

You can get the free Software by using the link given at the end of the article. Extract the zipped folder and then click on the SortOf.exe file to run (the app is completely portable and doesn’t require any installation). SortOf needs the .net Framework 4.0 to execute. So, make sure that your system has the desired .net Framework installed, before running SortOf.

How to Automatically Organize Files on PC using SortOf:

When you run the software, you’ll have the following window:

The Directory Path is a text box which shows the path of the folder whose contents are to be sorted out. To add a folder for sorting click on Browse button. After adding the folder, you can choose requisite categories from the folder categories check list and specify which file types you want to organize. Then click on Sort Out button. A folder for each category (that you have checked on) will get created and there you’ll have your files sorted. Sorting is as simple as that!

One big advantage of SortOf is that this software organizes files of similar types in their respected folders, e.g all audio files like mp3,wav,wma etc. will be saved inside Music folder, all video files will be stored inside Videos folder, and those files whose file type is not in the check list or whose file types are not recognized by SortOf, get’s stored inside Others folder. Following is a screenshot of a sample folder, before and after sorting files with SortOf. 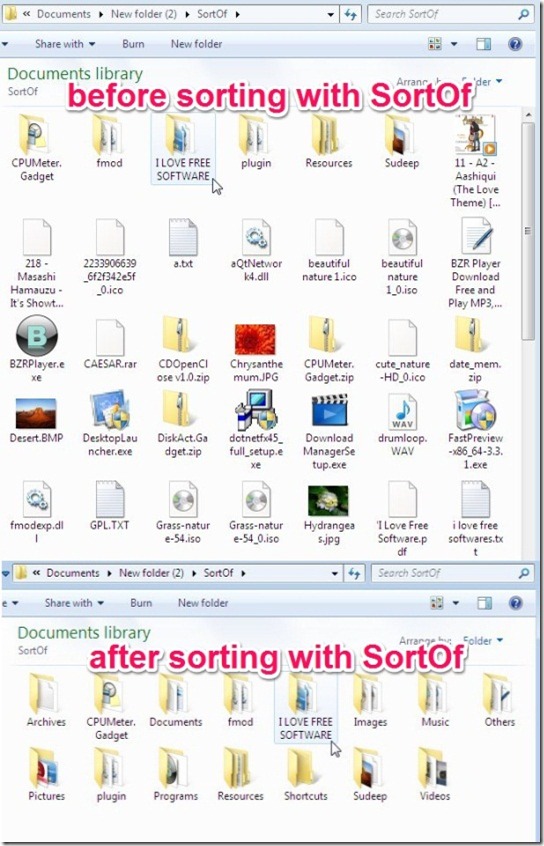 Also check out some similar software we reviewed earlier: Concord, Arrange Your PC, and Elyse.

SortOf is a really quick and easy medium to organize files on PC. Manual sorting can be really boring and time consuming when you have a long list of files. Use SortOf for sorting files and save your time. It just takes few mouse clicks to sort out the long list of different files. Moreover, SortOf is quite simple to use. I used it and found it very handy. It serves its purpose to the fullest. Try it out, it’s totally free.