It lets you create a sync folder in which you can add required folders for syncing. A secret key is also generated for sharing that folder. You only need to install BitTorrent Sync to other devices, and insert secret key to start automatic synchronization. 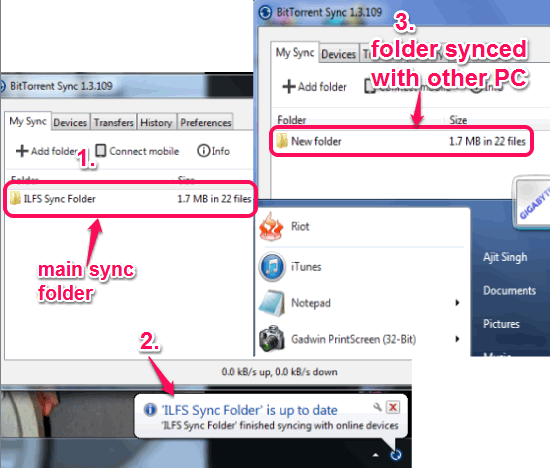 In screenshot above, you can see it provides notification whenever sync is completed with all online devices (that are running BitTorrent Sync). Whenever a new file is added or any file is deleted from sync folder, it automatically updates other devices.

Note: Main interface of BitTorrent Sync lets you add more and more folders for sync, but sync for those folders can be done with smartphones only. To sync folders between computers, you have to use the main sync folder only.

How To Use BitTorrent Sync To Sync Folders Between Multiple Computers and Devices?

Download BitTorrent PC client using the link given at the end of this review. It is a lightweight software which comes with a setup file less than 3 MB. To make it easy to understand how it works, lets divide this sync process in two parts: sync folders between computers and sync folders between PC and smartphone.

Step 1: Install BitTorrent Sync on your PC by following the Standard Setup process. This will let you select your main sync folder. You can either choose existing folder or generate a new folder. A secret sharing key for that folder will also be generated during installation process. 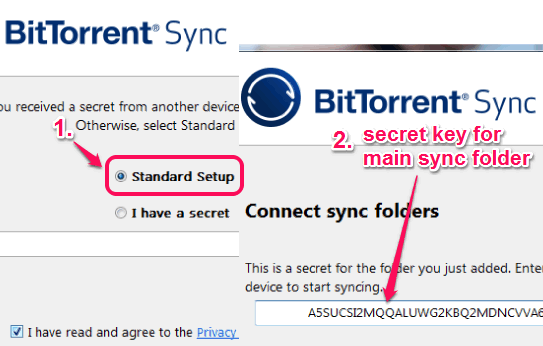 Step 2: After setting up sync folder, you can add multiple folders inside that folder. Now keep running BitTorrent Sync on your PC and let your friend(s) start installing BitTorrent Sync to their PCs. During the installation process, your friend(s) need to select ‘I have a secret‘ option. Also, they have to add the same secret key that was generated for your sync folder. Then only sync process will take place. 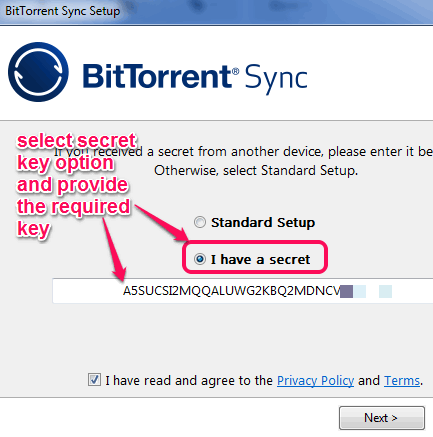 Give the secret key to your friends and let them finish the installation process by selecting destination folder (for storing your sync folder). After finishing the installation, BitTorrent Sync will run silently in system tray and sync process will start automatically. As soon as the syncing is done, notification is provided to you. 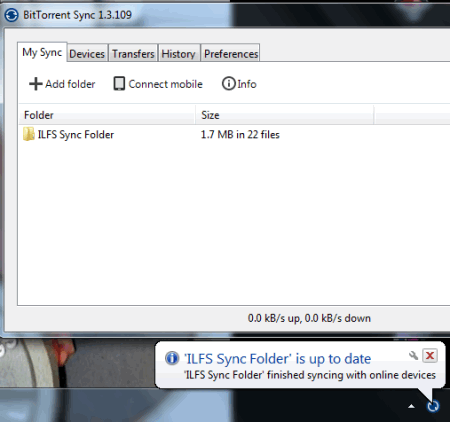 After this, whenever you or your friend will add or delete files to that folder, sync will start automatically (if both devices are running at that time).

Sync Folders Between PC and Android:

To sync folders between PC and Android (or iPhone and Windows phone), you need to install the app on your smartphone. After installation, follow these steps:

Step 1:  On its PC client interface, right-click on sync folder, and click on Connect mobile device option. This will provide a QR code that will help to connect your phone with your PC. In QR code, it also lets you set permission (full access or read only) for sync folder. You can also create other folders than main sync folder, but in my testing, sync failed with other folders. So you should move main sync folder only. 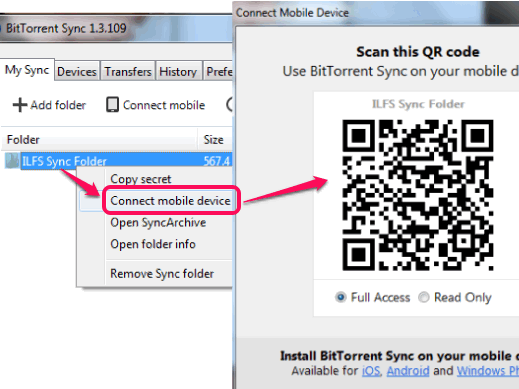 Step 2: Run BitTorrent Sync app on your smartphone and select a location for sync folder. After this, click on Scan a QR code button. Now you have to scan the computer code to establish connection between your phone and PC. 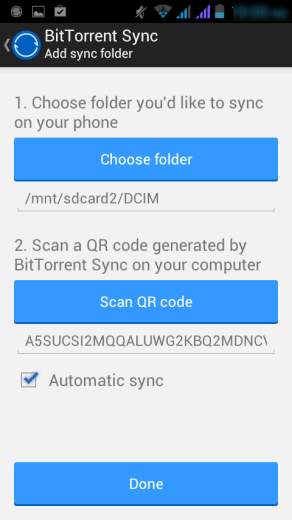 Step 3: Once the connection is established, sync will start automatically, and sync folder will come to your mobile with all files. If the destination folder chosen by you in smartphone already contains some files, then those files will also sync to your PC. 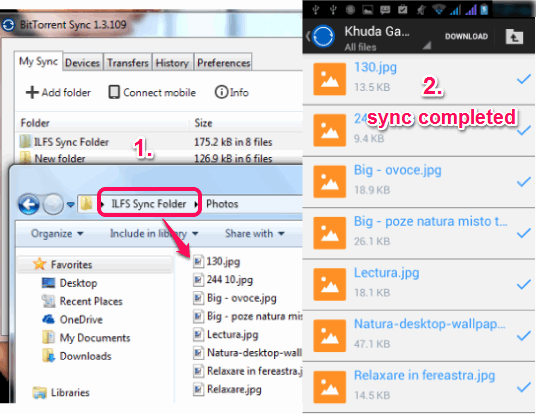 BitTorrent Sync is simply good enough to sync multiple folders between different mobile devices and computers. Without any hassle, it lets you sync all required folders. Other than the fact that I was not able to create multiple folders for syncing, the app worked absolutely fine. Whether you have to sync folders between your home PC and office PC or you need to sync PC folders with your smartphone, BitTorrent Sync is valuable.