This article covers 6 free Windows 10 animal sound apps for kids. These animal sound apps are aimed at children between ages 1-4 so that they can learn all about animals and the sounds they make. All the apps come with pictures of animals either real image or animated image. The picture is accompanied with the sound of the animal. Kids can look at the pictures and learn about animals as well. Some of the apps will also give you tests or exercises at the end so that you can check how well the kids remember.

All these apps can be downloaded for free from the Windows 10 store. Let’s look at these free Windows 10 animal sound apps for kids below. 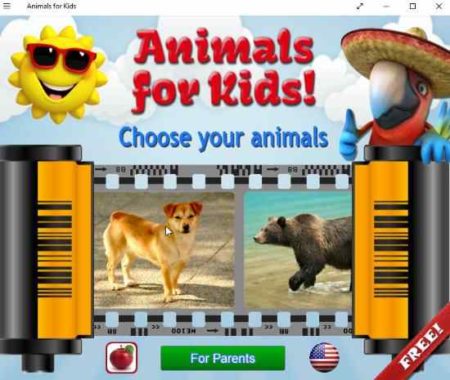 Animals for Kids is a free Windows 10 animal sound app. It is like a educational game for young kids which will teach them about animals, their names, and their sounds. When you start the app you will come across an interface like the one shown in the screenshot above. You can select from various categories like pet animal, wild animals, birds, insects, etc. When you click on a category the animals in that category will open up. You will be able to see the first animal in the list. There would be a picture of the animal, its name would be pronounced out loud and then you will be able to hear the sound it makes. You can repeat the sound by clicking the play button at the bottom right corner. Click the forward button to move on to the next animal image. 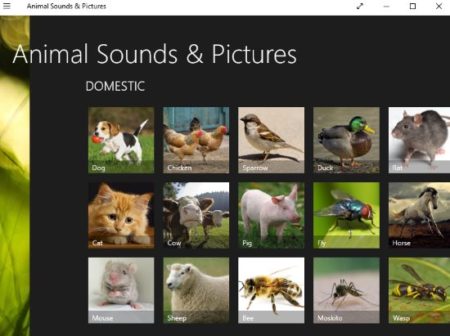 Animal Sounds & Pictures is a free animal sound app. The animals have been divided into domestic animals and wild animals. You will see a screen like the one shown above. Where you will see all the animal pictures with their name displayed on the picture. When you click on a picture the sound of the animal in the picture will be played. The settings option lets you turn the background sound on or off, the display name on the picture can also be turned on or off. 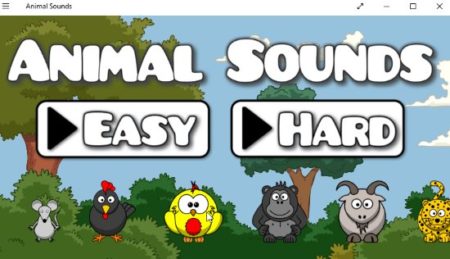 Animal Sounds is a free app to learn about animal sounds. The interface of the app will look like the screenshot above. You can see that there are animated animals given on the screen, when you click on them you will be able to listen to the sound that they make. Just keep on scrolling and clicking on animals to listen to the sounds they make. On top of the screen you will see two button which say easy and hard. These two are exercises where a sound is played and three animals are displayed on the screen. You have to pick the animal who makes the sound which was played out of the three. This will make sure that kids remember the sounds they have been hearing. 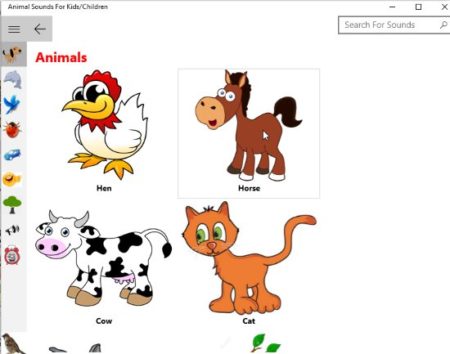 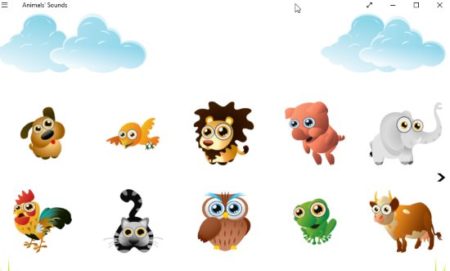 Animals Sounds is a free Windows 10 animal sound app. The interface of the app is quite cute and can be seen in the screenshot above. The animal pictures shown on the app are all animated. The app has a very limited number of animals in the app. When you click on a animal picture, the sound that animal makes will be played out loud. You can scroll to the other page to listen to more animal sounds. The name of the animal will be displayed only when you click on it along with its sound. 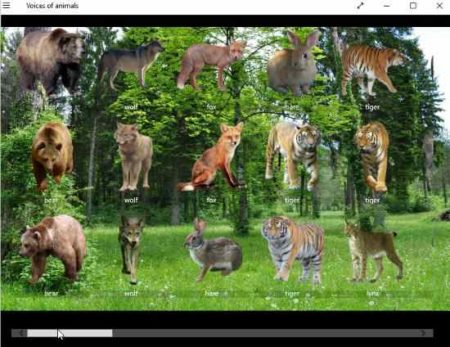 Voices of Animals is a free Windows 10 app to learn animal sounds. The interface of the app when you open it up will be as seen in the screenshot above. The picture and name of an animal is displayed on screen. When you click on the animal picture, the sound it makes will be played. There are lots of animals listed in the app which you can see by scrolling.

These are the 6 free Windows 10 animals sound apps for kids. They not only help kids relate animals and the sounds they make, they also help kids in learning by offering exercises. All the apps are pretty good. Some apps have a better animal collection then others. Try these apps out and see which ones you like.