Solitaire is an App for all Android users in which you can play free solitaire games on Android. It allows you to play in Single Player mode and also in Multiplayer mode. The app also allows Android users to customize the game by changing the background, selecting a new card back, and arranging the layout to suit right handed or left handed people. It also has a Show Me How To Win feature for all Winning Deals. 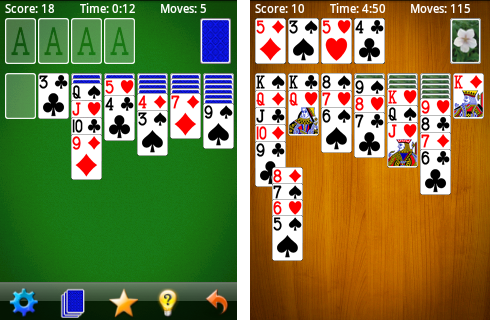 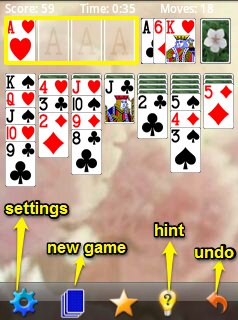 How to Play Free Solitaire Games on Android with this App:

Tap on the deck of cards on the bottom bar. You will get option to Play a Random deal, a Winning Deal, a Multiplayer game or Replay the previous game. In a random deal, all the cards are shuffled randomly and so there may not be any solution. But all Winning Deals have at least one solution.

Also check out free apps to play Solitaire on Windows 8, and other Free Card Games, too.

The object of the game is to arrange all cards from the stockpile and the seven columns to the four foundation piles, one for each suit of a standard 52 card deck of playing cards without jokers. To place a card, you can either drag it and drop it on another card, or just tap a card or a deck of cards to place it on top of another card. The action is legal when the card being placed is of less rank and alternate color than the one it is placed on in one of the seven the columns, or if it is of greater rank and same suit when being placed on top of a card in the foundation pile. If you cannot find the solution, you can click on the Gold Star on the bottom bar to access the Show Me How To Win feature. This feature shows you a video of the solution of the game. 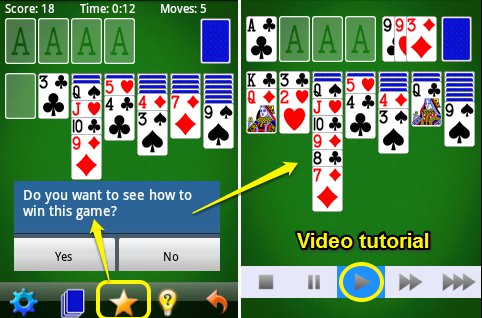 Solitaire is a classic game that millions of people love to play in their free time and with friends. This Android app for Solitaire allows us to play free Solitaire games without the need of an active internet connection. Though it is an ad-supported game, the ads did not bother me much. I really liked playing Solitaire on this App.