This tutorial explains how to run multiple apps simultaneously in Windows 8.

Microsoft provides you with the ability to run multiple apps simultaneously in Windows 8. This feature is called “Snap” by Microsoft. Sadly this useful and cool feature is not explained properly when you start your new Windows 8; instead Microsoft relies on chance discovery. It is a good function of the new Windows 8 and is very useful in some situations; as you can see in the screenshot below. 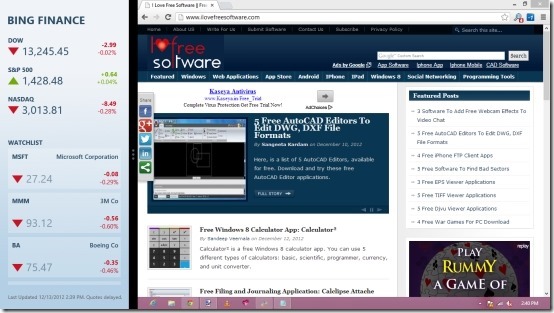 So, here in this tutorial we are going to learn how to use the Snap feature in the new Windows 8 and run multiple apps simultaneously in Windows 8. This feature is specially of use for the users of Windows RT, who want to multitask.

Note: One important fact about the Snap feature in Windows 8 is that it will only work if you are using a display that is at least 1336 pixels wide.

The Snap mode only works with the Apps in Windows 8. You cannot snap Windows desktop applications, but as Windows Desktop itself is an app, you can snap it.

Here are some other interesting tutorials for your new windows 8 PC:

How To Use Task Manager In Windows 8

How To Get Start Menu In Windows 8

How To Clear Personal Information From Tiles In Windows 8

How To Add Administrative Tools On Windows 8 Start Screen