Here is a free software to convert Mac font to Windows font. You can add multiple dfont files (which are supported by Mac) and then start the conversion to get the output font files supported by Windows. If you have some Mac font that you want to use in Windows PC, then this software will be a good option.

The software that I have covered to convert Mac font to Windows font is named “DfontSplitter“. The interface of this font converter is pretty simple and the conversion process is also straightforward.

In the screenshot added below, you can see that some dfont files are converted to Windows supported font files, which are TrueType Font files (*.ttf). For each input dfont file, a bold and medium/regular output font files are generated. 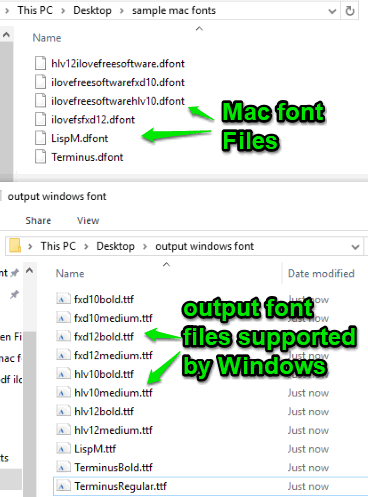 How to Convert Mac Font to Windows Font using This Free Software?

Grab the EXE of this DfontSplitter software. You can download that EXE by clicking on the link present at the end of this article. Run that EXE and install this software.

When the interface is opened, use Add Files button. If some font file is added accidentally, you can also remove it. After that, you can access the folder where dfont files are stored and add them. The list of all the added Mac font files is visible on the top part of its interface. 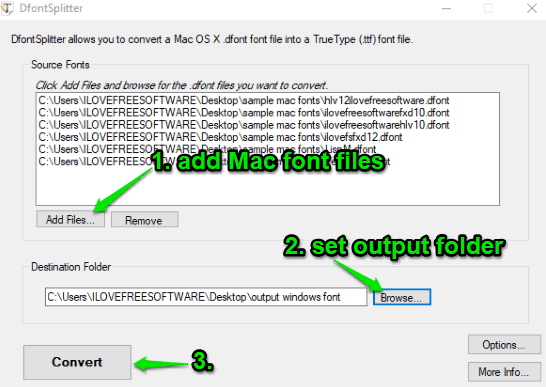 Now set the destination folder of your choice and then press the Convert button. It starts the conversion process which takes a few seconds only.

After that, the output folder is opened automatically or you can manually open it and access the TTF font files.

You may also check this list to create fonts.

There are a few other free font converters also available but such software can convert only those fonts which are supported by Windows only. Those who are looking for some very simple software that can convert Mac font to Windows font, then this software can be given a try.