History Mapped is a free website which provides information about different battles which were waged between 353 BCE and 1513 AD. These battles are represented on a timeline in a descending order from left to right. You can see the geographical location of the ancient battlefield on the map and watch a video which speaks about the battle in details.

This is an innovative concept to make a subject like history interesting for the viewers. Though the absence of information on modern and postmodern era wars make it less interesting, the website is pretty useful to know about the history battles. A more interactive design and information can change the entire appeal of History Mapped, but the present UI is also good.

Understanding the Different Sections in the Homepage

What you see above is the homepage of this website. The page is divided into three sections. The upper two sections divide the page laterally. On one half, there is a map and the other half is reserved for YouTube video about the battle you’ve selected. The bottom section has a battle timeline and a horizontal scroll bar using which you can see the list of all battles that have shaped the world, from 358 BCE to 1513 AD.

How to Select a Battle in the Timeline?

When you select a battle, (example- Caeser in Britain), the color of the selected battle changes in the timeline. Immediately the map automatically positions itself on the historic location of the battle pointing the battle location with an icon. A corresponding YouTube video about the battle appears on the other half of the page. Now you can play the animated video which describes the battle. 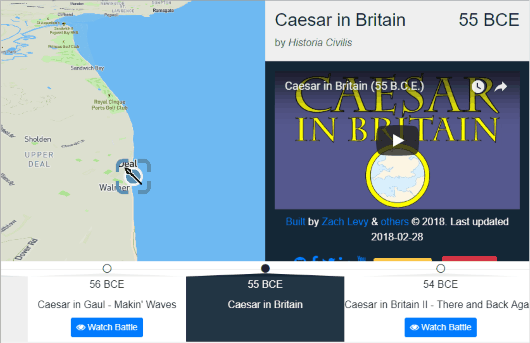 You can scroll the timeline using the horizontal bar to check other battles listed there and learn more about each one of them.

Check out these other 10 best free websites that provide educational videos.

This website provides a good way to learn about the various history battles of the world. It saves time and makes the experience more interactive by combining a map along with the video. Talking about drawbacks, I feel the list of battles represented on the map is not exhaustive and many important battles are left out. The map is not user-friendly and one cannot zoom in or zoom out in the map to have an actual idea about the location of the battle.

Learn more about other famous battles from accessing its homepage.