Fotomoji is a free and fun app that turns your photos into emoji mosaics on iPhone. You can easily emojify (as they call it in the app) all your photos to make them look like an emoji splash. For this, all you need to do is import a photo from your camera roll or click one using the built-in camera. It will automatically apply emoji effects to the photo, and after processing the photo it will look like completely made out of emojis. The app lets you select either all the emojis to spread over your photos, or your favorite emoji packs while turning your photos into emoji mosaics. Similar to another fun emoji app for iPhone “EmojiFace“, this one is also pretty interesting and fun to use.

You can customize your emoji mosaics in many ways such as choose quality, layout, background color, and duplication. In addition to that, you can also adjust detail fidelity, recoloring amount, packing amount, contrast, brightness, and randomize emojis order/positions from the settings. When you’re done with turning your photos into emoji mosaics, save and share them with the world via Facebook, Twitter, WhatsApp, and more. 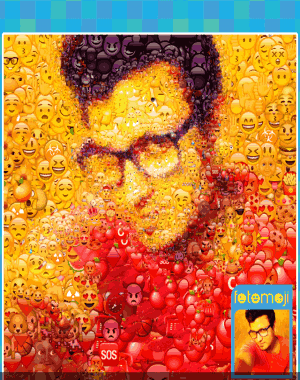 How to Turn Photos into Emoji Mosaics on iPhone:

Step 1: After you open the app, you will see two buttons at the bottom named, Albums and Camera. If you wish to import photos from your camera roll then tap the albums button, or tap the camera button to capture photos using the built-in camera. 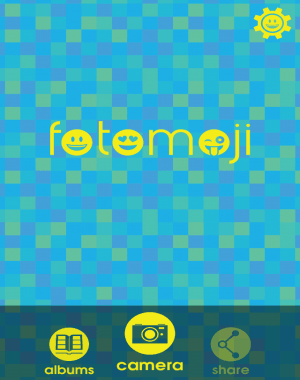 Step 2: Once, you’re done with capturing or importing a photo, tap the “Go” button to proceed. If you want to change the photo, then you can tap the “Source” button and go back.

Step 3: As soon as you do that, the app will automatically start applying emoji effect to create a splash over the photo. When the processing is complete, you will be able to see your photo completely made out of emojis. At the bottom, there will also be a small frame that shows your original photo as shown in the first screenshot. 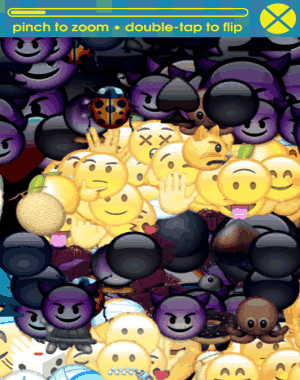 Step 4: You can either select the option to use all the emojis while creating the mosaic or you can choose your favorite emoji packs. To do this, tap the settings icon and choose the emoji option. There will also be options to enable or disable square crop and frame addition. To make the app more fun, it also allows you to include a secret emoji (a Poop King) with the others while generating the mosaic. When the mosaic is ready, you can zoom the photo to find out the secret emoji from tons of emojis for fun. 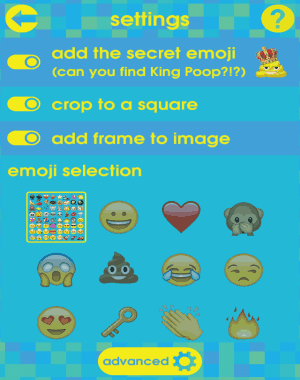 Step 5: If you wish to customize the mosaic effect more, then tap the “Advanced” button in the app settings. You will be able to adjust brightness, contrast, recoloring amount, detail fidelity, and packing amount. Apart from that, you can choose a background color, duplication, quality (emojis density), and a layout.

Fotomoji is a pretty fun app that turns your normal photos into something interesting and visually appealing. You can either import a photo from the camera roll or capture one, in order to turn it into an emoji mosaic. It also has the options to choose what emojis to include in the mosaic, include secret emoji, customize mosaics, choose layout, and much more.