This post talks about 2 free Spotify ad blocker apps for macOS to mute Spotify ads. The following apps intelligently detect the starting of ads in Spotify desktop player and then silent it precisely. Both the apps that I have added in this post mute the ads throughout its length and then restore the volume when the song starts playing. These apps run in the menubar and their icon changes where they encounter any ad in the player. You just run these apps while Spotify is playing your songs and they will keep doing their work.

In the free version of Spotify, it plays ads in the playback. Listening to them one or two times is okay. But if you play Spotify for long hours then those ads can really irritate you. In that case, the following apps that I have mentioned below can come in handy. Even though there are some paid apps available for this, you can use these free alternatives without any problems. Both the apps that I have listed here can help you by intelligently muting the ads and won’t cost you a single penny. 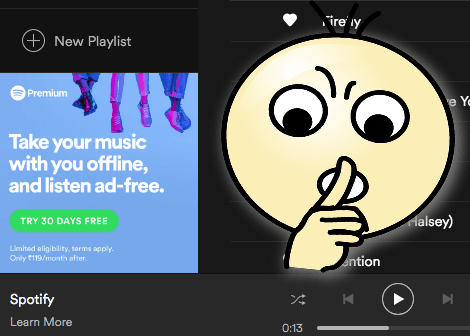 How to Mute Spotify Ads in Mac with these Free Spotify Ad Blocker Apps?

MuteSpotifyAds is one of the best free Spotify ad blocker apps that you can use to automatically mute Spotify ads. It remains active only during when the Spotify is running. And if you close Spotify then the service of this app will also kill itself. It keeps track of the current song and when the ad start spraying, it immediately mutes it. And you can see its icon change in the menu bar to an umbrella like shape. And when the ad finishes after 30 or 60 seconds, it restores the volume level and the next song plays just fine.

This is an open source app which you can use to automatically mute ads in Spotify. And this app is specifically created lightweight so that it will use fewer resources. However, this app is not signed currency, So, after you download it, you will have to allow it from the MAC’s security settings. After that, just run it and then start the playback in Spotify. After the ad comes, then it’s icon will change and ad audio will be muted automatically. And after the ad finished, the volume level will be restored where it was. You can see the screenshot above. 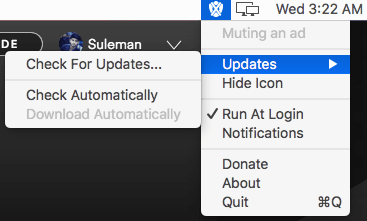 Spotifree is another free and very nice app for macOS that you can use to automatically mute ads in Spotify. This is like the other app that I have mentioned above but with some major differences. it uses a whole different way to detect Spotify ads and the mute them. It keeps running after 3 seconds to detect the track type and if it’s an ad then it will simply mute the system audio and will unmute it when the ad has finished. Simple as that. You can see its icon change in the menu bar when it encounters an ad.

Just like the above app, this is open source and unsigned. So, after installing it, you will have to allow it from the systems’ preferences. After it runs, you can see its menu bar icon. Now, it is monitoring and you can start your playback and sit back. It will keep checking whether the current track is an ad. And if its ad then it will immediately mute it. Also, the system audio will be restored when the ad has finished. Overall, the app is simple and works perfectly fine with the Spotify desktop player.

These are the only free Spotify ad blocker apps I could find to mute Spotify ads automatically. You can use any app mentioned here and then simply mute Spotify ads like a pro. Both the apps work in similar way but you can use the one that you can think good for you. Personally, I will recommend you to use MuteSpotifyAds as it uses less resources but it doesn’t mean then other is heavier. In the end, it totally depends on you which app you want to use. So, if you are looking for some free apps to mute Spotify ads then this post will be really helpful.