Here are some fun Thanksgiving apps and games which will make your day even more fun filled and joyous. Thanksgiving is a time when the whole family gets together to celebrate. During this time families are looking for things to do together or spend time together. This article contains Thanksgiving apps like messages you can use to give a toast before starting Thanksgiving dinner or games which you can play with the entire family or with kids to keep them busy.

Let’s look at these Windows 10 Thanksgiving apps and games to make the day more joyous and perfect. 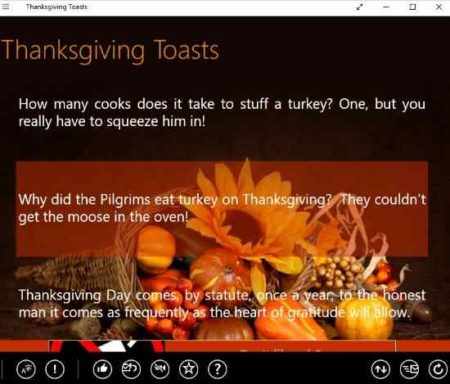 Thanksgiving Toasts is a nice app from where you can get ideas to include in your Thanksgiving toast. If you have been designated to make a Thanksgiving toast, then you would definitely need inspiration to write one. This app can be helpful when you are deciding what to say in your toast. You can take inspiration from the quotes given in the app. You can go through the quotes one by one, or change the order in which they appear, email the quote to yourself, etc. There is a option to select a language out of the three given ones, but the option didn’t seem to work.  You can send your favorite quotes as an email to yourself and then use them where ever you want. You can also use these quotes as greetings and wishes for the Thanksgiving day. 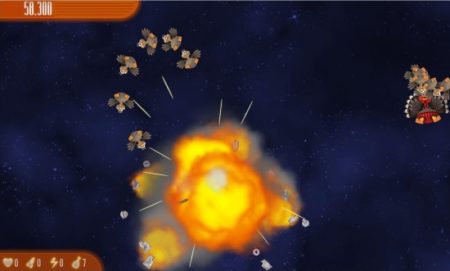 Chicken Invaders 4 Thanksgiving HD is a real fun game app to play. In this game app you have to travel back in time to save the Thanksgiving dinner for the future generations to come. There is a small video story which plays before the start of the game to explain to you why you need to travel back in time to save earth. When you are finally on the game screen you will see chicken and turkeys flying around. You have to fire at them destroying them. Collect the gifts that fall after you destroy a turkey or chicken by moving your spacecraft around. But do avoid asteroids that are among the chicken. If you hit the asteroids then your spacecraft will be destroyed. You get 5 lives when you start, when you lose all the 5 lives then its game over for you and you will be shown your leaderboard ranking.

The controls of the game are simple move your mouse to move the spacecraft or use the arrow keys to move. For firing use the space bar or left mouse click.

Turkey Pops is another fun game app, where all you have to do is pop turkeys which are making a sound. When you click the play now button you will have two turkeys in front of you. One of them will make a sound and pass a cloud of purple colored gas from behind it. To score you have to quickly see which turkey made a sound by seeing where the gas cloud came from. If you click the right turkey the number of turkeys on screen will double. This will keep on happening till you click the right turkey in time. The screen will be full of turkeys at a point, as can be seen in the screenshot above. Thus making it difficult to see which turkey made the sound. 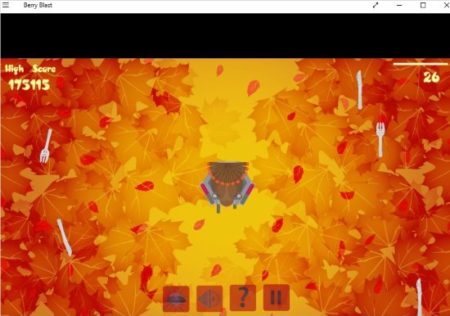 Berry Blast is a real fun game for Thanksgiving. The game play screen can be seen in the screenshot above. In this game you need to defend the turkey from the flying fork and knives. You have to shoot them with berry blasts. Its a simple point and shoot game which can be played using a mouse, keyboard or touch screen device. The controls are simple use the mouse left click to point and shoot. In keyboard use the arrow keys and space bar to point and shoot. Keep shooting and crossing levels. See how high you can go with loosing. The background music of the app is quite good. You can also use a berry bomb once in a while to destroy everything coming from all directions. 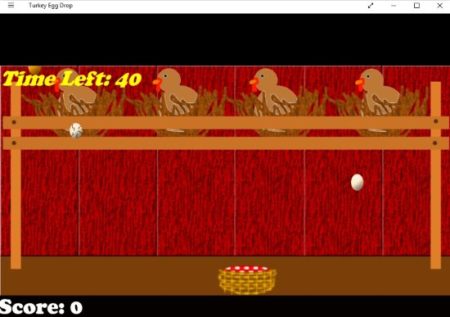 Turkey Egg Drop is a game app for Thanksgiving where you have to catch the falling eggs in the basket below. There is a 45 second time limit in each round. Score as much as you can in 45 seconds. The game can be played easily in touch screen devices or non-touch devices.  In touch screen devices you can moved the basket around by pressing and moving. While with keyboard you can use the arrow keys to move the basket around and with mouse you can left click the mouse button on the basket and move it around. At the beginning of the game you are shown which colored egg give you how many points. Like the brown egg fetches you 3 points, white egg fetches 1 point, blue egg multiples your points by 2, and broken egg deducts 2 points from your score.