Google Reader is one of the most used RSS reader out there, but all of a sudden Google has announced that they are going to retire the service on the 1st of July because of low usage (What !!); to read more about this click here. Most of the user of Google Reader are in total shock (that includes me).

Google reader provides you with a main web page and apps for different platforms. This post deals with the Google Reader Alternatives for Android/iOS. Below are some of the apps that we consider a good alternative to Google Reader.

So try them out, test them, and find an alternative for Google Reader app for your mobile device (Android/iOS) before the service goes dark on the 1st of July. Also if you think that there are other apps that deserve to be known then mention them in comments section below.

Pulse News is one of the most well known news reader app for most of the popular mobile platforms. This was one of the first apps that displayed the RSS content in a beautiful interface. The app offers you the ability to create an account, so that you can keep save all the RSS news feeds in the app. The best part about this service is that it also has a web page just like Google reader, so anything you read on the desktop will automatically be synced to the app and vise versa. The RSS items are laid out in horizontally scrolling strip that makes reading experience fun, if you think that Flipboard is too fancy then Pulse News is just for you and is a perfect Google Reader alternative for Android/iOS. 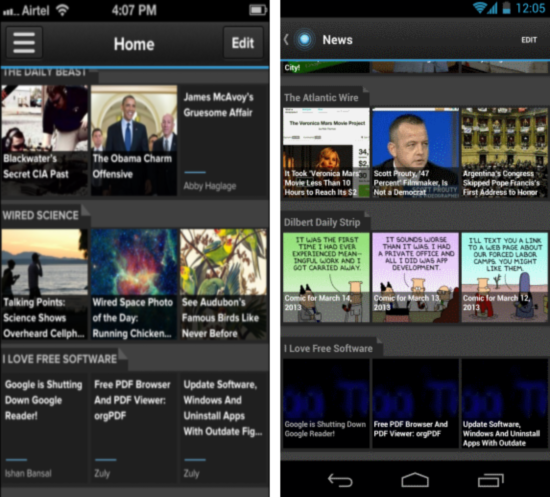 When you open up the app it will have some of the most popular feeds pre-loaded and also you have the option to browse through and add other popular news feeds of different categories. Now if you want to add a RSS news feature click on the app content button and you will be presented with the window where all the popular content will be shown; to add your RSS news feed click on the search button. This will bring up a window that will allow you to add RSS feeds, website, and search for interesting topics.

The app even has support for Google Reader, this was important for the people, So users of Google reader who preferred a better designed app used this app a lot. But after Google Reader service goes dark all you need to do here is add the RSS feeds that you love into the app and all your favorite news feeds will remain stored in a single place, just like Google Reader. Also the app supports Reddit which is another bonus.

Feedly is new to the game but this app has gained amazing amount of popularity. Its web application has been available for years but its the mobile version of the app that resulted in it’s services becoming popular. If you needed a free beautiful Google reader app then Feedly was the choice of many. 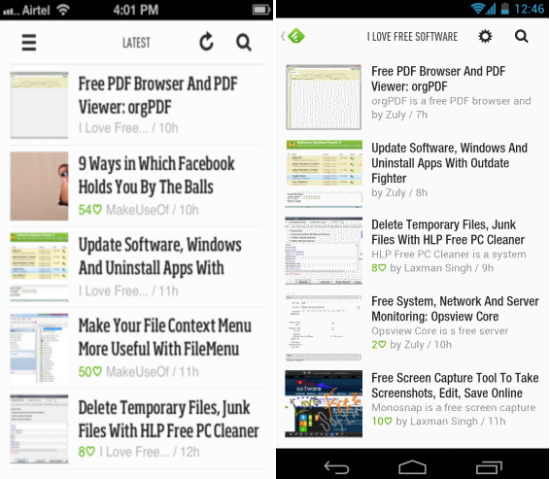 The best thing that the guys at Feedly have done that just might make it one of the best Google reader alternative for Android, iOS, and the web is that the company announced that they have been working on a project called Normandy which will clone the Google Reader API and when Google reader goes down Feedly will automatically switch to Normandy as a back end.

Feedly has an amazingly elegant interface which offers an amazing set of features. You can add RSS feeds, sync your Google Reader (Which will become useless), save for later, dark theme, and search for other content with complete ease. The app allows you to share the things that you like to Twitter, Google+, Facebook. In simple words the app is simply awesome and supports a web version plus most probably the Normandy service will take care of the Feeds. So give this Google reader app a try before July 1st and seamlessly migrate away from Google Reader.

If you don’t know about Flipboard then most probably you were living under a rock; Flipboard is a very popular news reader app for all mobile platforms. This was the first app to make magazine style view popular for news readers. If you love fancy then this app is definitely for you. Download this app and flip through your news feeds in a magazine like interface. After you have installed the app,  just run it; you will be presented with the option to sign in with your Flipboard account. 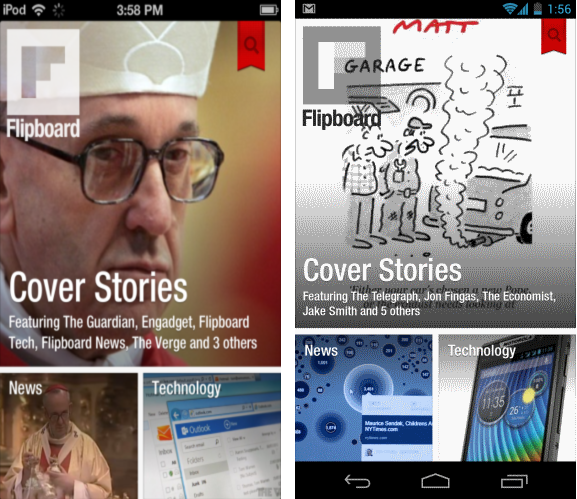 After you have signed in just select news feeds from the provided categories to start with the app. Also you can view your social networks in this type of interface if you wish to do so just sign into them individually. The app also provides support for Twitter, Google+, Facebook, Linkedln, Instagram, Flickr, tumblr, 500px, YouTube etc. If you would like to add feeds then just click on the search ribbon that will bring up the interface from where you can search for site and add feeds.

The best thing about this app is it’s popularity, trust, huge amount of content to select from, customize all your stories according to your need. If you would like to have a stylish Google Reader alternative for Android/iOS then try FlipBoard. One thing that makes me sad is that the app does not have a web version.

Google Currents is magazine style news viewer and RSS reader; in simple words Google’s take on Flipboard. This app provides you with quite a bit of amazing bells and whistles, but it did not catch on that much and people where happy with their Google Reader, Flipboard etc. Now if Google is going to retire Google Reader than most probably lots of users who are comfortable with Google products will switch to the this app, most probably. Hence, it might become the best Google Reader app for Android/iOS overnight. 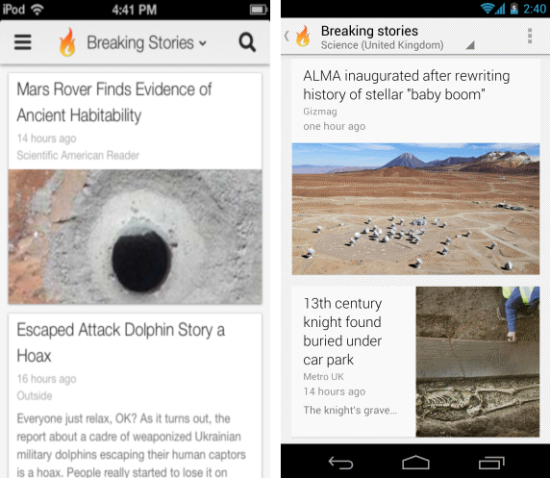 The app has a beautiful magazine-style interface, which looks sleek and works fast and responsive. The app also lets you download publications and receive content that is optimized for the app;  quite big publications offer you ability to read their magazine on Google Currents. The stories appear in boxes which are quite similar to Google now. One feature that I liked in particularly was the breaking news feature which pulls up the latest news related to the given category. All your categories and the content inside those are listed on hidden panel on the left that can be brought up with a swipe from the left of the screen.

Most probably Google will push this app after Google Reader dies down by adding more features in to it and the app will become popular.

Taptu offers you a similar interface to Pulse News. By default the app comes with a bunch of news feeds that are already added to the app. When you open up the app you will have the option to sign in using various social networks so that you can sync the app across multiple devices. After this you will need to select categories of news that you are interested in and then you will have the interface in front of you as shown below in the screenshot. 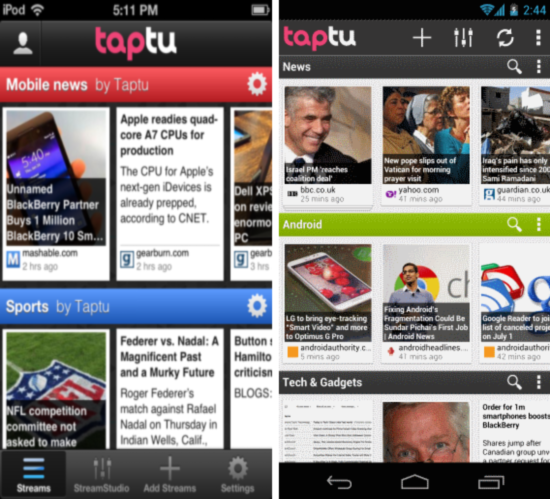 The interface keeps things simple and if you do not like magazine styled news readers then definitely try out this app. Here the news items are presented in a horizontally scrolling strip that contains news items. The app allows you to customize the way information is presented in front of you with it’s news DJ features that allows you to customize streams, arrange them, change colors etc. The app also allows you to share the stories that you liked the most with other with a single click. To app allows you to integrate with your Facebook and Twitter too. In total if you would like to have a simple alternative to Google Reader for your mobile device then this just might be it. Download the app form the link provided below.