In this article, I have compiled a list of 5 free Android apps to mask screen. These Android apps will place a mask screen on your phone that resists nearby people from snooping on your phone. They will not be able to see what’s going on the screen of your phone and you can continue to chat or do some confidential work at public places. Some of the apps on my list even allow you to interact with the masked screen as well i.e. while still being hidden from others you can work on full screen of your phone without any problem. Others don’t support this feature and you will have to adjust the viewport to work on your phone but they do give you the option to adjust the opacity of screen mask. 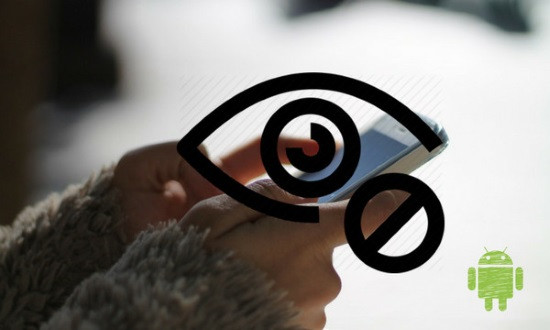 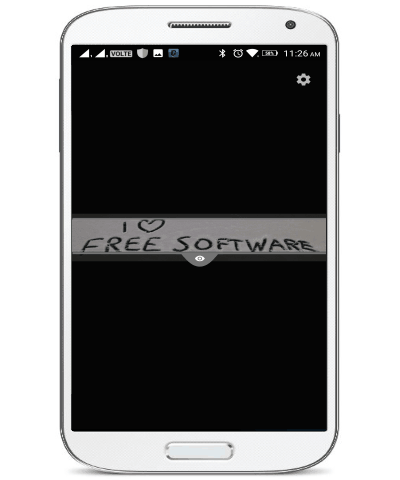 Privacy Shade is a free privacy screen Android app from Blackberry that applies a mask to your screen and makes it more secure. We have already covered the detailed review of Privacy Shade in which we have told you the way to download it for non-Blackberry Android devices and Blackberry Android devices. In addition to this, you can also get to know how to work with it to hide the screen from others. Just to give you an overview of the app, it will add a viewport on the phone screen which can be adjusted vertically. The screen area inside the viewport is visible to you and rest of the screen is not clearly visible to nearby persons, as you can see in the screenshot above. You also get the option to adjust the opacity of the mask screen and change the shape of the rectangular viewport to oval. The added advantage of Privacy Shade is that you can interact with the masked screen unlike other apps on my list which don’t support this feature. I will recommend you to check out Privacy Shade as it is completely free from ads and you can also interact with the masked screen.

Get Privacy Shade using Blackberry Manager for other Android devices.

Screen Guard privacy screen is a free Android privacy screen which can also help you to hide the screen from other people in public places. Just like Privacy shade, you can interact with the masked screen. So, that’s a bit of flexibility offered by the app. It works in a different way from other privacy screen apps on my list i.e. you have to move the bubble at the bottom-right corner of your phone to enable the masked screen. The default theme of the mask screen is shown in the screenshot above which can be changed to a solid color from the app settings. To change the mask screen opacity and to turn it off you can access its Notification area widget as shown in the screenshot above. 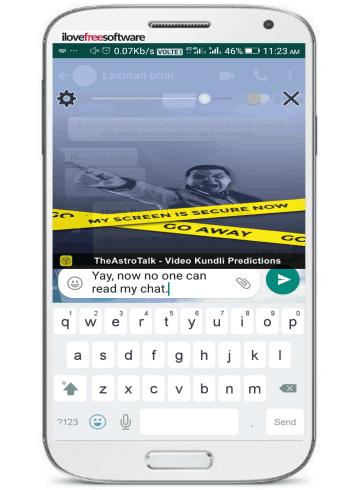 Maskchat is another Android privacy screen app to apply cool and funny masks on the phone screen and make them resistive from curious eyes. I have talked about this app in a tutorial to hide WhatsApp chat at public places but it can be perfectly used to hide any screen on any Android screen. It adds a floating button from which you can mask the current screen as shown in the screenshot above. On the masked screen, there is a slider to control its opacity and you can also adjust it vertically to see or hide some part of the screen. Unlike Privacy Shade, you can’t interact with the screen beneath the masked screen. You can also unmask the screen by tapping on the Close button. In addition to this, there are a number of different themes that you can apply on the masked screen to make it look funnier and cool. 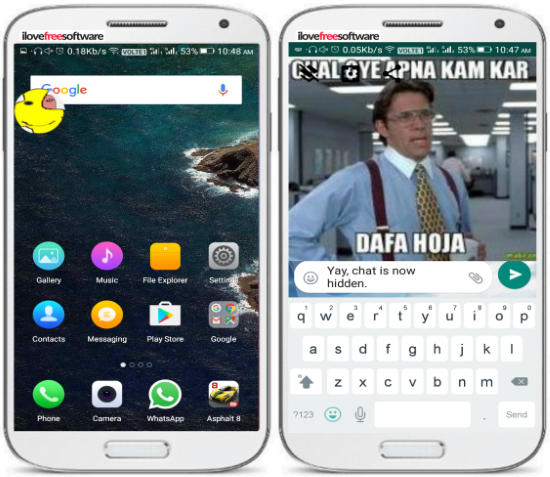 HideChat is another Android app to set a privacy screen and make phone secure from external eyes in public places, as shown in the screenshot above. This app shares the same characteristics as that of MaskChat but it is quite laggy as compared to MaskChat. After installing this app, you will see a floating button which gives you the access to the masked screen. A tap on the floating button will add a screen mask which can be adjusted vertically and you can also change the opacity to see beneath it. Also, you can’t interact with the hidden screen. 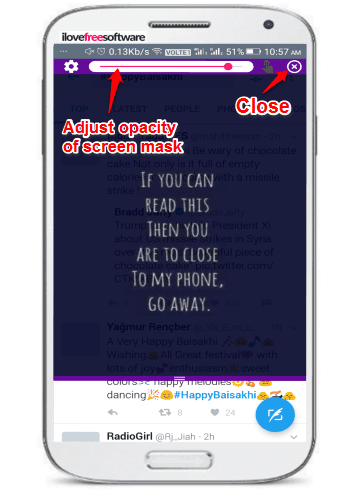 mCurtain is a free Android privacy app to add a mask screen and hide it from others. It also works just like the previous privacy apps on my list i.e. adds a floating button which can be used to toggle the mask screen and hide the screen from others. After installing this app, a floating button is added on your phone and a tap on it will bring forth the masked screen which you can move up and down to adjust and smoothly work with the rest of the screen. Like other privacy screen apps on my list, it also lets you interact with the masked screen; just tap on the Hand button at the top of masked screen to interact. It offers a number of different themes that you can apply to the masked screen from the app settings option. It also gives you the option to choose a picture from gallery to set it as a masked theme but it doesn’t quite work for me but you can try it at your end and see if it works for you or not.

In this article, I introduced you to 5 free Android screen privacy screens to hide screen from others in public places. My favorite ones from the list are: Privacy Shade and Screen Guard privacy screen as they allow you to interact with the masked screen as well.