This article takes you through a simple tutorial on how to automatically change Power Plan based on CPU load.

Windows has built-in power schemes to manage CPU usage and conserve power. By default, there are three Power Plans in Windows; Battery Saver, Balanced, and Performance. You can also create custom power plans as well. But, the problem is, whenever there is a need of changing a power plan, you have to manually switch these plans. For example, if your active Power Plan is Performance, but, the CPU is in an idle state, it will still stay in the Performance plan no matter what.

Also read: How to Disable Adaptive Brightness in Windows 10

How To Automatically Change Power Plan Based on CPU Load?

GiMeSapce Power Control is a free power scheme management software for Windows. It is small in size, taking around 1.32 MB when installed. Despite being small in size, it packs some really powerful features to manage power consumption on Windows. 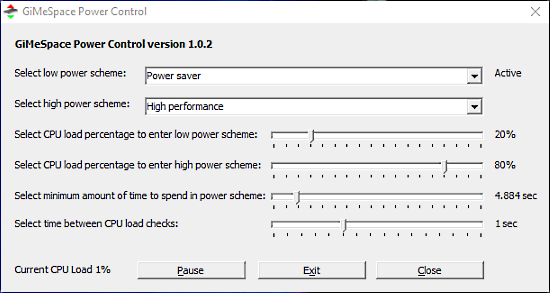 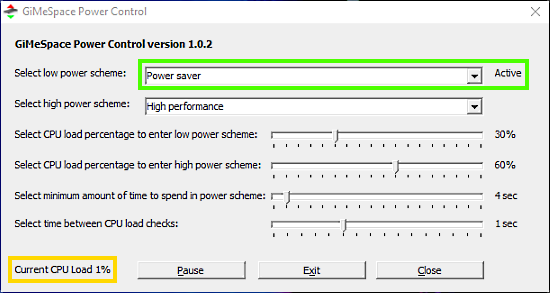 As soon as I started some CPU hungry tasks, the CPU usages spiked to 66% and this software almost instantly switched to the high power scheme i.e. High Performance. Moreover, you can also set the minimum time required to spend in a power scheme in order to avoid too much power scheme switching. 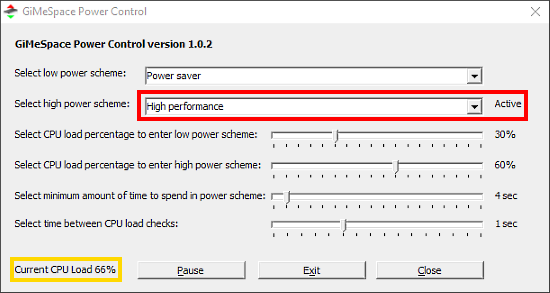 GiMiSpace Power Control is a must-have system utility if your workflow involves drastic CPU load changes. It provides the performance on demand meanwhile saves the power when you don’t need performance.