Google Photos Takeout Helper is a free tool to organize your downloaded Google Photos in chronological order. Basically, it takes the entire takeout folder from you and then finds the photos and save them in another folder specified by you. It can help you get rid of all the JSON files that are there in the Photos folder. It can easily extract all the photos from the Google archive and then save it on your PC. If you have a huge album on Google Photos then this tool will help you save all your photos after separating them annoying JSON files.

In Google Takeout when you go inside the Photos folder, you will see a lot of JSON files; one for each photo that typically stores the EXIF data. But if you only want photos then filtering photos from the folder can be a hectic job. And that is where this Google Photos Takeout Helper comes in handy. Basically it is  python script that you can run from command line and let it do the heavy lifting. There is a very simple command to invoke it and it does its job pretty quickly. 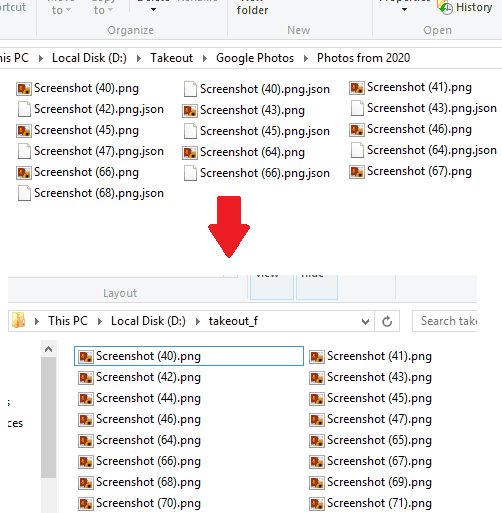 Using Google Photos Takeout Helper script is actually very simple. You only need to have Python installed on your PC. And no matter what operating system you are using, if Python can be installed on that then you can use this tool. Open command prompt or the terminal and then run the following command for installation. 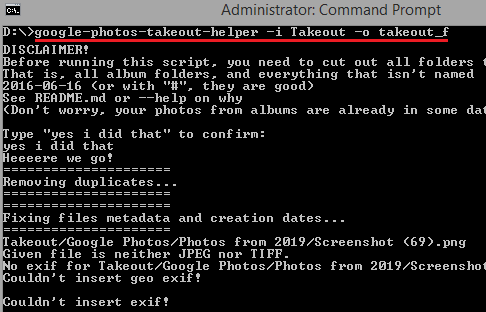 Now, I am assuming that you have already downloaded your Google Takeout. Just extract the ZIP file and then save the extracted “Takeout” folder in current directory for ease. Next, simply remove all “album folders” that are not named like “2016-06-16” pattern.

Now, you just the main command  in the following syntax. It will now take all the photos from the input takeout folder and will organize them in the output folder you specify. This is as simple as that. It shouldn’t take much time but if you thousands of photos in your takeout then it may take a few minutes. The final folder after moving all photos will look like as I have shown in the first screenshot in the beginning.

In this way, you can use this simple python script to organize photos from your Google Takeout of Photos. This is simple and commands are some for all platforms. There are some technical aspects that you can take a closer look at on the GitHub page of the tool. It is completely open source and if you want then you can also take part in its development.

Google Takeout is messy and it is really a pain to filter out the unnecessary files from it. And now this tool here will help you. All you have to do is issue a simple command and let it take care of the rest. The process is very straightforward as it only takes the downloaded Takeout folder as an input. So, just try on your own Google Takeout archive and see how it works there. If you face any problems then you can let me know.