While most of you might know about the Facebook Look Back campaign launched by Facebook on the occasion of its 10th anniversary, for others who haven’t yet checked this out might want to have a look at it over here. It’s a very simple yet nostalgic campaign as it highlights some of the best moments through photos and status updates after you joined Facebook. It is a combination of the most popular status updates and most liked photos. From the pool of all the photos and status updates, Facebook selects the best ones for you.

While it’s a nice initiative by Facebook but the default video of around a minute is automatically created by Facebook. It chooses some of your most liked photos and status updates and compiles them into a video.

This sounds cool and you might’ve seen and shared your own look back video with your friends but you might be wondering what exactly the issue is? Well we can summarize it as below.

After Facebook launched the Look Back feature, while many went down their memory lanes and shared it with their friends and family eagerly, some were worried because some awkward moments have been captured by Facebook automatically for this video and they didn’t want to share a video including those moments to make things more clumsy for themselves. So, soon people started complaining and sending requests to Facebook to help them alter their video as per their wish. So naturally to woo its users and make their experience a bit more personal and nostalgic an “Edit” feature was added by Facebook for all its users along with the original video created by them.

Let’s have a look at the feature and the edit enable option in detail. 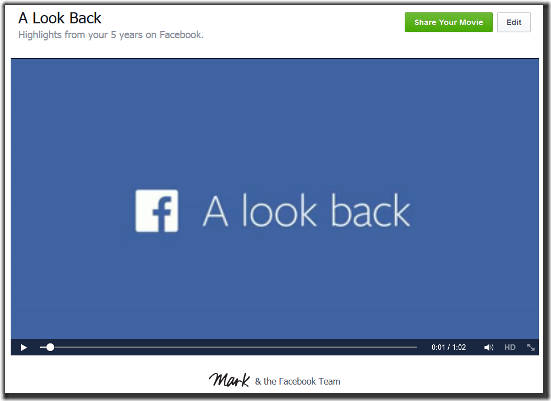 It’s a very easy way to get around the awkwardness through click and choose option and won’t be a problem for anyone. So to tweak your Look Back video a bit, head to the Edit section of Look Back and do it before your past posts come and haunt you!