Here is a list of 4 free iPhone apps to create comic strips which lets you create your own custom comic strips with no need of any drawing or graphics knowledge.

These apps offers various characters, stickers, text bubbles, templates, etc., using which you can create your personalize comic strip with in a few minutes. The icing on the cake is that these apps also let you use your personally clicked photos to create comics. We all have read various comics in our childhood with superheroes like Superman, He-man, Phantom, Mendrake The Magician, Spiderman, Batman and a lot more. But with the apps included in this post, you can create your own superheroes and did I mention that you can even make yourself a superhero with these apps.

Lets see what I have in store for you today: 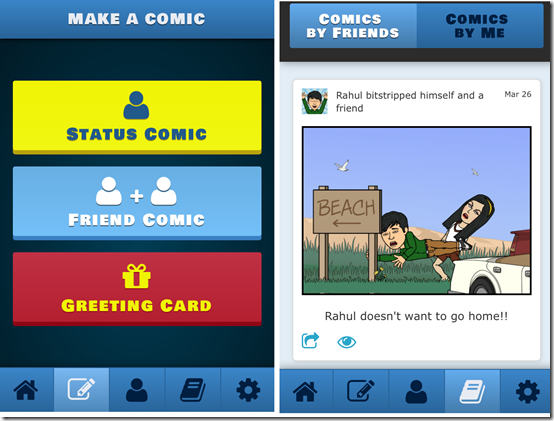 The first iPhone app to create comic strips is Bitstrips. This apps lets you create comic strips including yourself and even your friends. The app lets you choose from different situations for creating the comic strip. You can also customize your avatar so that it looks similar to you. You can choose the face type, skin tone, hair color, hair length, hair type, hair style, jaws, eyebrows, eyes, lipstick, facial hair, height, build, outfit type, and much more. The app lets you create three types of strips: Status Comic, Friend Comic, and Greeting Card.

The only thing you should keep in mind that this app works only after signing in via Facebook. You can share your comic strips on Facebook and view the comic strips created by your Facebook friends from within the app. 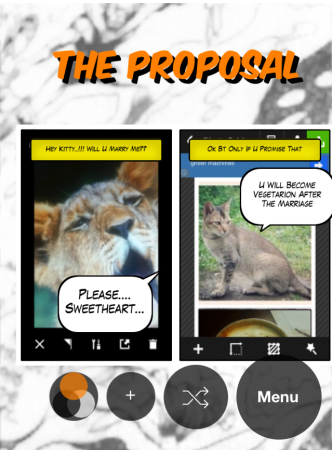 Get My Comic here. 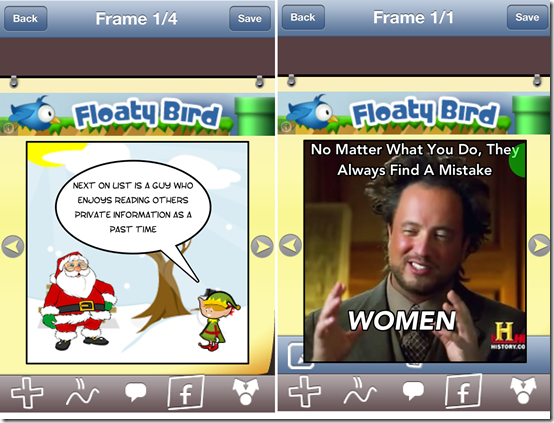 The third app in this list is a combo of both comic creator and meme creator. In this app, each one of your comic strip is known as a Frame. So, if you want to create a complete comic book then you can do so by adding multiple frames and if you want to create memes, then you can use a single frame. The app lets you add characters, objects, backgrounds, photos (camera/gallery) to make the perfect comic strip or meme. The app also has a most popular meme templates which you can use to create professional looking memes. Besides, this the app has stickers and lets you share your comic or meme directly to Facebook. You can also share them via Twitter and mail. 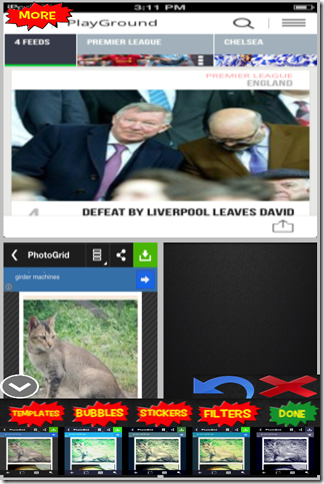 The last iPhone app for creating comic strips is Comic Book Creator for LEGO Characters!. To create comic strips using this app, you first need to select the template. The app has a total of 18 frames for you to choose from. Once you have selected the template, you can import photos to it from your iPhone’s camera, iPhone’s gallery, and app’s gallery. Apart from this, you can add text bubbles, stickers, and filters to imported photos. When you have created your comic strip, then you can share them via Facebook, Twitter, email, and print them.

With this app, I conclude my list of 4 free iPhone apps to create comic strips. So don’t wait more, and get ready to become the superhero of your own comic or just make a funny comic strip including your friends. Try these apps and do mention the name of the app which impressed you the most.