Here is a list of 5 free brick breaker games for iPhone which you can play to enjoy the evergreen classic brick breaking game on iPhone.

Brick breaker is one of the oldest yet entertaining and addictive game out there. In this game, you have to use a ball to break all the bricks on the screen along with preventing it from falling from the paddle. The paddle in the game acts as the launcher which is used to launch the ball. You can also move the paddle left/right to prevent the ball from falling as well as to deflect the ball at desired angle so that you can break all the bricks. All these games also follow the same gameplay but with a little bit of modification which makes these games even more fun to play. Lets have a look at these games. 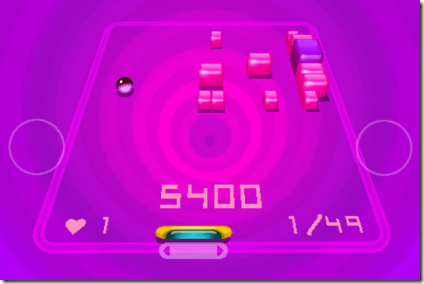 The first brick breaker game for iPhone is 3D Brick Breaker Revolution FREE. As the name suggests, this game displays the bricks, ball, and paddle in 3D view. The game play of the game is same except for the game modes and power ups. The game has various power ups which makes this game the most interesting game in this list. Some of the power ups are: Double Points, Bigger Paddle, Smaller Paddle, Near Vision, Jump, Magnet, etc. Besides this, the game has 3 modes for you to play: Classic Mode, Revolution Mode, and Time Attack. You can also unlock various achievements in this game by completing different tasks mentioned in the Achievements section of the game. 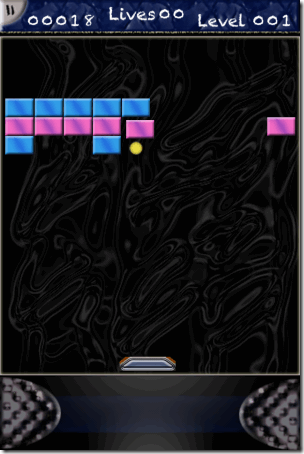 Second brick breaker game in the list is Oldschool Blocks. This game is very much similar to those old school brick breaker games which we used to play on handheld video games. The game has same interface except for the colors and also the same game sound. In this game, you have to clear the 3 line of bricks by breaking each and every brick. You have got only three lives to clear any level so you also need to be careful that ball doesn’t fall. This game also has various power-ups which will help you in clearing the level a little quicker and easily. 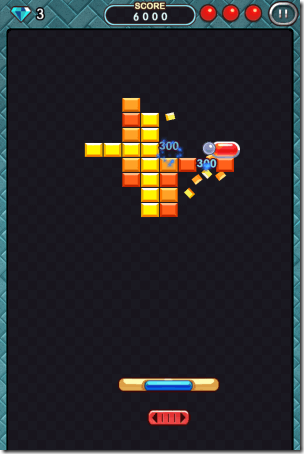 Brick Breaker 2012 is the third brick breaker game for iPhone in this list. The game has 4 different modes: Basic, Cute, Space, and Hard Core. In the beginning of the game, only Basic mode is unlocked. To unlock and play the rest of the modes, you need to collect a pre-defined number of diamonds. The Basic mode of the game has 50 sub-levels. You can collect the diamonds by playing these sub-levels. One more unique thing about the game is the method using which you will launch the ball.

In this game, the ball is placed on rubber like platform which can be stretched by you in any direction of your choice to launch the ball. Once the ball is launched, the platform becomes rigid and rest of the game is similar to the classic brick breaker game. 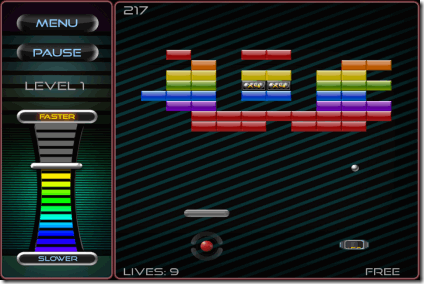 Breakout®: Boost is the second last game in this list. This game is very much different as compared to other games included in this article. In this game, you control the speed of the ball as per your preference. Higher the speed, more the points you will receive. There is a limitation of 10 lives to break all the bricks. You receive points ranging from 1 times to 10 times, depending on the speed of ball set by you. This game also includes various boosts and power ups which will help you to score more. The game has an achievements section where you can check for the achievements achieved by you. 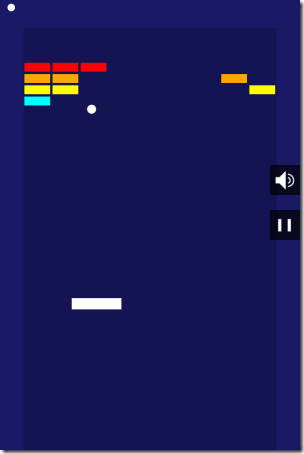 The last game in this list for iPhone is Simple Brick Breaker. It is a simple brick breaking game with no visual effects. You have to break the bricks aligned in 4 lines to complete the level with 4 lives in hand. The game boasts of having a total of 101 levels for you to complete. Although even this game also has power-ups and boosts, the only thing that make this game different from other ones is its simplicity. If you are a fan of those games which don’t have much glitters and visuals, then you will surely love this game.

Here, I conclude my list of 5 free brick breaker games for iPhone which will take you to your childhood days. Try out these games and don’t forget to mention the name of the game