Evertoon is a free iPhone app to create 3D cartoon movies with custom avatars. You can choose any two of your favorite celebrity avatars for your movie, add custom avatars, edit scenes, record voice for story telling, add emoji effects and much more to create an amazing 3D cartoon movie right on your iPhone. It also lets you insert any image to the avatar’s face and add voice filters (low or high the pitch and robot sound) to your recordings. The emoji effects are awesome, as you can use them to make your movie avatars dance, punch each other, kiss, shy, get angry, hug, make a sad face, and so on. The best part of this app is that you can entirely customize the look of any avatar by dressing it up with stylish suits, business outfit, sunglasses, shorts, different hair styles, eyes color, gender, and even change the skin tone.

Other than that, you can also change the movie background by either importing any photo from your camera roll or using the pre-defined backgrounds such as living room, rooftop, office, the moon, and forest. Whatever stories or hilarious jokes you have to tell your friends, simply turn them into something funny and interesting using Evertoon. 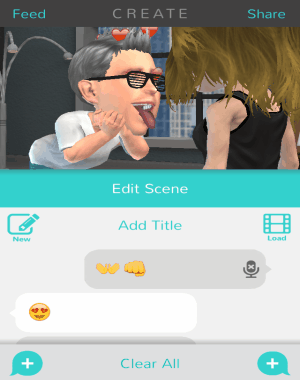 Unlike the core cartoon maker websites, this app doesn’t require creating the entire cartoon avatar, as it comes with built-in 3D cartoon avatars to make it much easier for you to include them in a movie. You can create your 3D cartoon movies in no time and save or share them via Instagram, Facebook, YouTube, WhatsApp, Twitter, and more.

How to Create 3D Cartoon Videos with Custom Avatar on iPhone:

Step 1: As soon as you open the app, you will see 2 default avatars at the top with different options like edit scene, add a title, and start a story at the bottom. To add your favorite celebrity avatars, tap the edit scene option and select the avatar which you want to change. You can choose a face for both the avatars one after another. 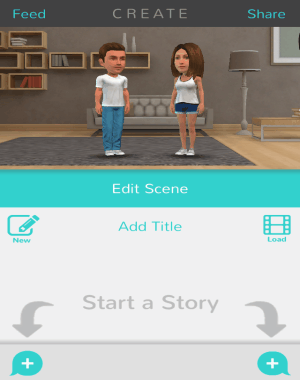 Step 2: You will see various celebrity faces like Donald trump, Leonardo, Justin Beiber, Emma Watson, and more from which you can select any one for your avatar. You can also capture your own face using the built-in camera, import a photo, and use a Facebook photo to insert it into the avatar’s face. 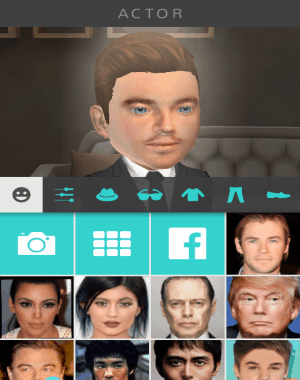 Step 3: In the same window, you can customize the avatar’s look by dressing it up sunglasses, suits, trousers, shoes, hat, hair styles (afro, buzz, bangs, and bob styles), and more. You can also change the skin tone or color, eyes color, and the gender of the avatar. 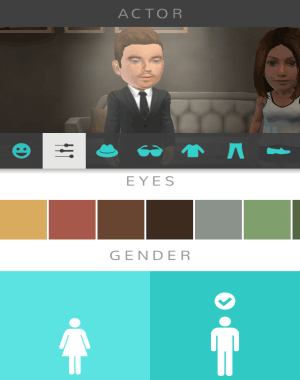 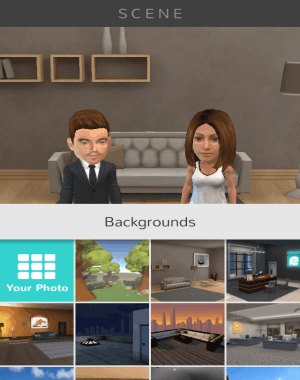 Step 5: Once, you’re done with choosing the avatars, customizing their looks and selecting a background, tap the done button to exit edit scene option and go to the main screen. Now, the main part of making the 3D cartoon movie is the story telling. You will be able to see two “+” buttons at the bottom as shown in the first screenshot. If you tap the “+” button on the right, then you will be able to assign actions to the avatar on that particular side, and the same goes for the left one.

Step 6: After you tap any “+” button, all the emojis will appear below along with the record button. To apply any emoji effect to the avatar, simply select any of the emojis and tap the “Play” button to preview the action. For example, if you select the punch emoji then the selected avatar will punch the other avatar. Sounds fun, isn’t it. You can apply various emoji effects to make the avatars perform different actions like a kiss, hug, get angry, handshake, be romantic, and much more. If you want to record your own voice to tell your story, then press the record button and start recording. 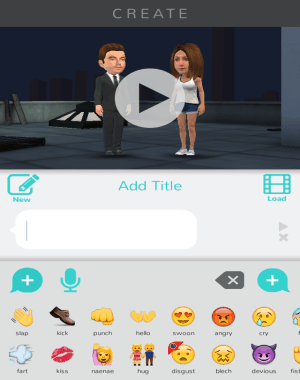 Evertoon lets you create stunning 3D cartoon movies with custom avatars in no time. You can customize the entire looks of any avatar by adding sunglasses, suits, shoes, shorts, trousers, etc. It also lets you change the color of the skin, eyes color, movie background, and avatar’s gender. The best part is that you can apply emoji effect to make the avatars perform various actions like a hug, kiss, dance, punch, slap, etc. If you wish to tell the story yourself, then simply record your own voice to the entire movie.