This article covers 5 free Windows 10 tank game apps. In these apps you get to drive around tank and shoot at other online players. The graphics in all the apps are pretty awesome with nice background sound. The battle between the tanks looks so realistic and that is why they are so much fun to play. Some of the games in the list let you play with other online players, while others are more target oriented. But both form of games are equally fun.

Iron Tanks is a free tank game for Windows 10. The app lets you join many online players to battle it out with tanks. The graphics are quite awesome along with the background sound. Tank can be moved around using the arrow keys and the tank tower can be rotated as well. For firing use the spacebar. The first level you go through is basically a tutorial level where you will get used to moving the tank around and collecting battery and fuel. After the first tutorial level you can go ahead and upgrade your tank and jump into a battle. In a battle arena there will be other tanks which represent other online players. You need to go ahead and shoot them before they shoot you. You can also upgrade your tank after every level to get a stronger tanks against other tanks. 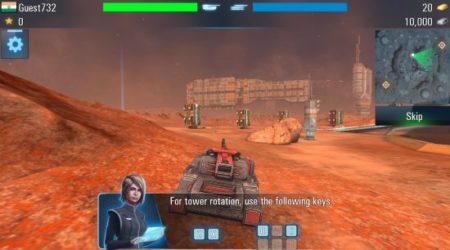 Future Tanks is a free tank game app. The game starts with a tutorial where you can get used to of moving the tank around and learn how to collect battery life. After completing this tutorial you will come to the real game with other online players as opponents. Start shooting other online players to make a high score and keep recharging your battery life. You can also upgrade your tank after a few levels. You can select from a wide range of tanks and can even chat with online players from your country. The graphics are pretty good and the background music does sound good as well. The app will give you instructions from time to time to let you know what has to be done. 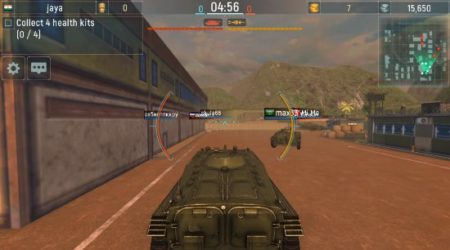 Armada Tanks is a free tank game app. This game app also comes with awesome graphics and background sound. You will just enter your name and start playing the game. You will be entering the battlefield immediately. You can see other online players with their tanks by the name displayed on each tank. Go ahead move in closer to the other tanks using the arrow keys and fire when the target is acquired. For firing you will be using the spacebar button. The game will be over as soon as you are hit and your tank is destroyed. You can upgrade your tank from time to time to make it more stronger and battle ready. 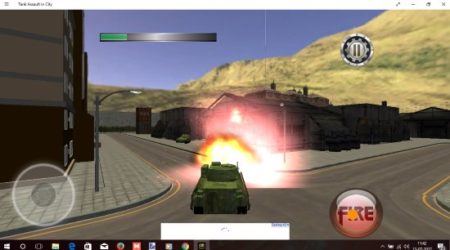 Tank Assault in City is a free tank game for Windows 10. This app is a great tank game, but it does not have online players. You will be playing against enemy tanks, who will fire at you once you get too close to them. You can move your tank around using the arrow keys and for firing use the F key. But remember every time you get hit, your tank life reduces and you come one step closer to getting your tank destroyed. If your tank is destroyed then its game over for you. One good hit from you though will destroy the enemy tank. So be on the look out for enemy tanks and be ready to fire.

Battlefield Tanks Blitz Missions 3D is a free tank game for Windows 10. In this game you will get a tank to fight with enemy tanks. When you will be sent in to battlefield you will be given instructions on how to operate the tank. Use your keyboard arrow keys to move the tank forward, backward or sideways. You will be shown a level target like destroy 12 enemy tanks. You will enter the battlefield and enemy tanks will start shooting at you. So keep a check on your tank health from the top left corner. Shoot your enemies out before they cause serious damage to you. For firing at your enemies use the left Ctrl button on your keyboard.

These are the 5 free Windows 10 tank game apps. All the games have nice graphics, and fighting tank battle sound pretty realistic with the background sound in the apps. I enjoyed all the tank games equally. Battling it out with online player games is more fun and the chances of you ending up dead are more as compared to target oriented games. So check them out and see which ones you like.