Here is a list of 5 free DNG editor software for Windows. With these software, you can easily edit DNG photos. DNG photos are raw image files that have JPEG view embedded in them, along with metadata about image and camera details. With these freeware, you can view a DNG image and apply a set of editing operations on them, and finally export them as various popular image formats. Some of the following DNG editor software also let you share edited photos to social media or over email.

DNG is a lossless image format introduced by Adobe Systems as a standard for digital photography. DNG photos are generally large in size because of the fact that this format focuses on use of metadata. DNG is similar to a RAW image format that contains nothing but set of color values, shutter speed, illumination, and various other camera details, from which a final JPEG or any other image can be constructed. DNG images have inbuilt JPEG view, but contained images can be enhanced to produce much better results. 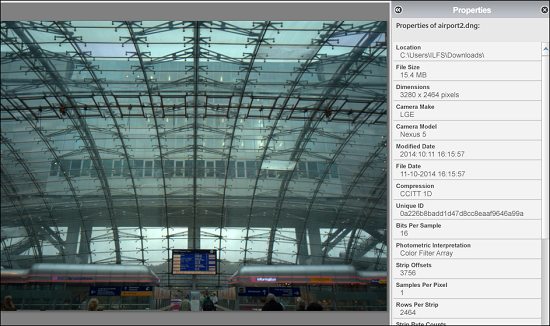 Now, let’s have a look on each DNG editor to find out how to edit DNG files using the listed freeware.

Picasa is one of the best image viewer and editor that lets you quickly find and edit images on your PC. It supports large number of image formats including JPEG, PNG, GIF, BMP, TIFF, DNG and many others. Due to the support for RAW images processing, you can easily open and edit any DNG image in it. It’s powerful editor lets you perform numerous operations on DNG images, including basic fixes (crop, rotate, resize, flip), apply filters, color effects, make a collage with DNG photos, etc.

With Picasa, you can also print, export, and mail DNG photos to recipients directly from its interface. 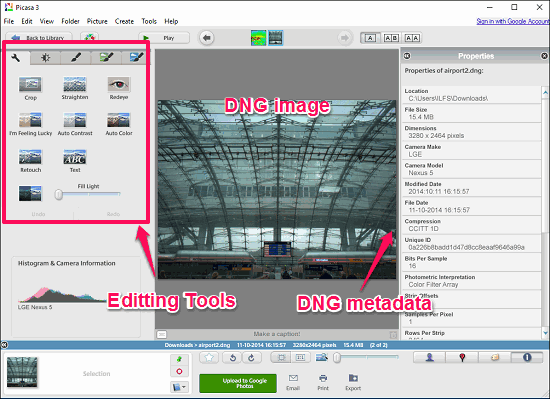 Overall it’s an outstanding photo editor that offers 1-click fixes and special effects for DNG photos at your fingertips.

Note: Google has discontinued Picasa, so no further updates to the software will be provided; however, the latest version of Picasa is available for download, and is pretty efficient at what it does.

Use Fotor as Free DNG Editor:

Fotor is another free software that you can use to open and edit DNG photos. It’s a cross-platform software that supports RAW photo formats including DNG format. Fotor has very polished user interface in which all tools are aligned on the right side of the software. Just like Picasa, you can also perform numerous editing operations on your DNG photo.

Fotor provides different sets of tools that can be used to manipulate a DNG image. With Fotor, you can crop, rotate, resize, straighten, add color effects, add different scene modes (sunset, night, cloudy, darken, etc), add text to the image, add tilt shift, and do much more. All the editing tools support 1-click fix method to edit a photo. 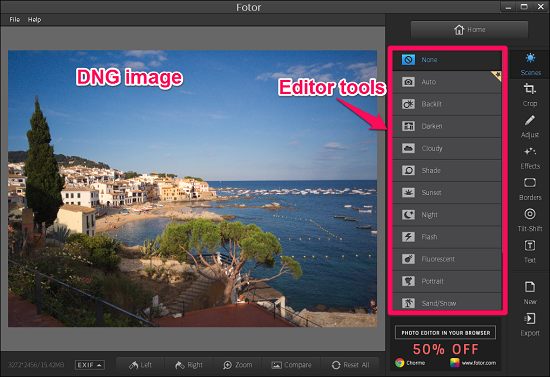 Fotor also let you export your edited DNG photo in various image formats, such as JPEG, PNG, BMP, and TIFF. So, you can use an edited photo as your desktop background or send it to someone on a social networking website. Fotor lets you share your edited photos to Facebook, Twitter, and Flickr directly from the software.

Its interface is quite complicated, as all the editing tools are given in menus or sub menus. But if you are not so demanding, then you will surely want to use it to edit a DNG photo. 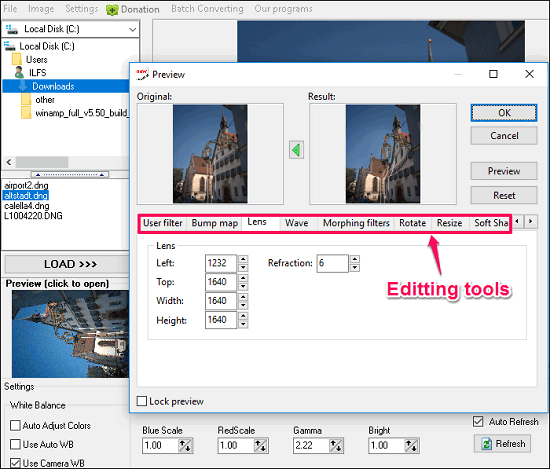 Able RAWer is simple software and it is only meant to manipulate raw image formats like RAW, DNG, etc. It lets you export final image in various other image formats. I find Able RAWer a nice software to edit and convert DNG photos.

Adobe DNG profile Editor is a free and portable software from Adobe Systems, that lets advanced photographers edit DNG images very easily. DNG Profile Editor uses one DNG image at a time and you can do various operations on it. There are four main editing sections on its interface, namely Color Tables, Tone Curve, Color Matrices, and Chart.

The best part about using DNG Profile Editor is that it lets you specify a desired camera profile before opening a DNG photo. It supports a large number of camera models. With this feature, a DNG image rendered on its interface is based on same color and intensity values as your camera model supports. 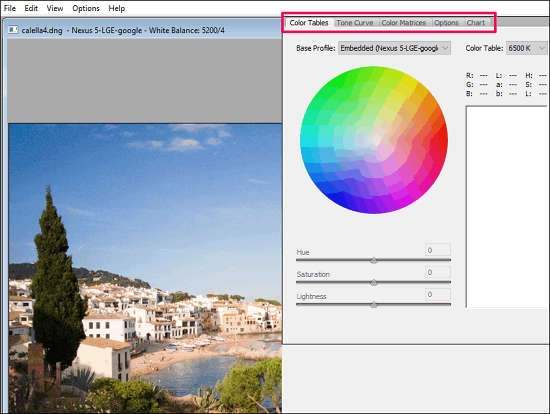 In Color Tables section, you can manipulate hue, saturation, and lightness of your DNG photo. If you want to change the tonal values of your DNG image by mixture of primary colors, then you can do it through Tone curve and Color Matrices. Similarly, you can use all the tools for editing and apply them in your photo.

A very sad thing about DNG Profile Editor is that it doesn’t let you export DNG images as other common image formats (JPEG, PNG or TIFF). You can only save changes as a DNG profile format. If you want to convert a DNG file to another image format, then you will need a DNG converter (you can use any of the other mentioned software in this article to convert DNG).

IrfanView is another free software that can be used as a DNG image viewer, editor, and converter. It supports a large number of image formats, including JPEG, PNG, GIF, BMP, TIFF and many others. It supports DNG format, but for that, you will have to download an additional plugin to make it support raw image formats, such as DNG. IrfanView’s glitch free performance makes it a popular software for image manipulation. And it can handle DNG images very easily, which are generally large in size. You can manipulate your DNG images using various editing tools provided by it, and finally you can export your DNG photo in various popular image formats. 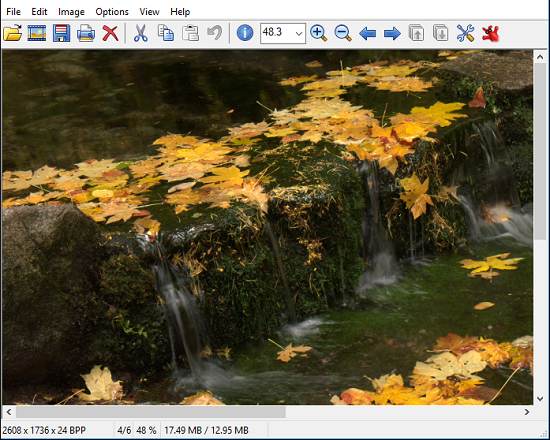 Another set of nice features that IrfanView provides are: sharing images over email, insert watermark, insert text in your photo, batch conversion, play slide show with photos, and batch rename. Overall, it’s an outstanding software that can handle any type of images very easily, specially DNG photos. Just give it a try.

If you are looking for free DNG editor software for Windows, then you have come to the right place. These Free DNG editors offer you many editing tools to edit DNG photo. Some of these also let you share photos on social media. So, if you are a photography enthusiast, then you must try these freeware to edit and convert raw images like DNG to produce stunning and high quality images.

And if you know some other software out there to edit DNG photos, then let me know in comments.