We have all had it happen that we accidentally delete our important files from our phone, and then we do nothing than regret. But if you’re an Android user, then you’re in luck as there are several recycle bin apps for Android which let you recover deleted files from Android, as you normally do with Recycle Bin on your PC.

This is a curated list of 5 best free Recycle Bin apps for Android. These apps work similar to core Recycle Bin tools, and automatically fetch all deleted files from Android, which you can later restore with ease. No more worrying about your photos, videos, documents, and more which you might delete accidentally on your Android phone.

Let us go through these apps to see how they can help you restore your deleted files. 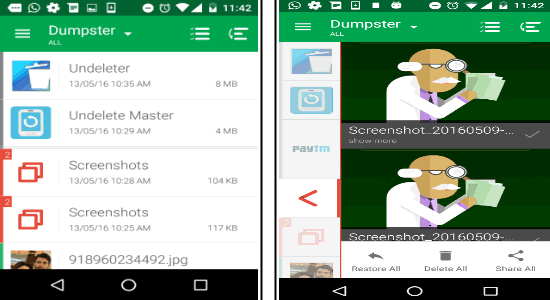 Dumpster is definitely one of the best Recycle Bin apps for Android. It works similar to the recycle bin on your laptop or desktop computer. It allows you to recover various file types like videos, images, music files, uninstalled apps, PPT, PDF, TXT, RAR, and almost all other commonly used files, which are deleted from your Android phone. You don’t have to frequently backup your files anymore, as this app backs you up in case you delete some files accidentally.

It doesn’t require anything to set manually for creating a backup of deleted files, which means all you need to do is open the app for once and you’re done. It will automatically start detecting deleted files on your entire phone. You can also preview videos, images, and audio files before restoring them, with just a tap. One of the best features of Dumpster is that you can schedule automatic deletion of older trash or deleted files in the range of 1 week, 1 month, and 3 months. It works without root. 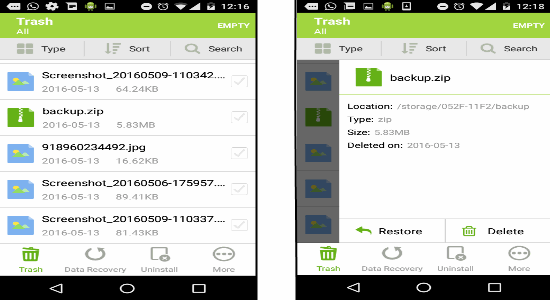 GT Trash is a free and powerful trash or Recycle bin app for Android. Using this app, you can get back all your accidentally deleted files. It automatically searches for deleted files on your Android phone and makes them visible in the app’s main screen. Later, you can simply open the app and recover any of these files you want. It fetches deleted files like audio, images, uninstalled apps, documents, videos, contacts, SMS, ZIP, and much more.

It also lets you sort the trash by file types, sort them by time/size/name, and erase all the deleted files with a single tap. Similar to Dumpster, this one also lets you preview files before recovering or erasing them. It also comes with a unique feature which detects files which were deleted even before installing this app. 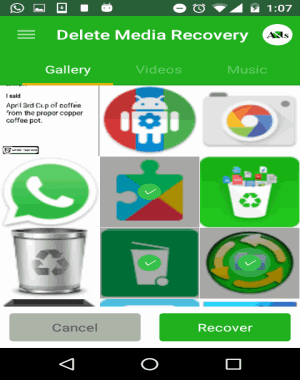 The third app in my list is “Data Media Recovery” which is also a pretty cool app for Android. Ever wanted to get back an important file which you have deleted by mistake from your phone, then this free Android app comes to the rescue. It scans for various file types deleted from your phone such as MP4, SXI, ODG, ODS, MKV, JAR, ODP, ODT, JPEG/JPG, GIF, MP4A, PPTX, FLAC, SXW, OGM, AVI, XLSX, BMP, SXD, EPUB, PDF, PNG, MNG, WAV, SXC, APK, ZIP, MP3, AMR, DOCX, JNG, and more.

All the deleted files will be listed in tabs like the gallery, videos, music, and files on the main screen. You can simply select a file or multiple files at once and hit the “Recover” button to restore the files in the app’s default folder. The best part is that apart from fetching your deleted images, videos, apps, and documents, it also backs up your SMS and contacts. 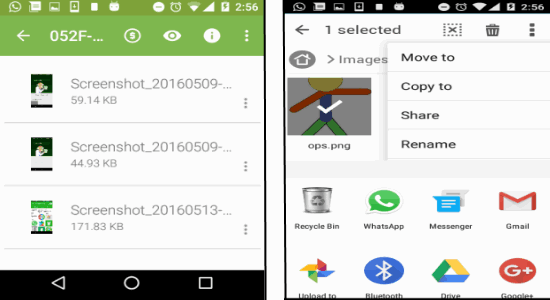 Recycle Bin is another useful recycle bin app for Android which works as it name says and keeps track of your deleted files. It supports almost all the third-party explorer apps such as ES File Explore, Neptune, Tomi File Explorer, etc. The deleted files from your phone can be moved to this app in two different ways. You can select a file which you want to delete, then click the share option and choose “Recycle Bin”. The file will be deleted and moved directly to the recycle bin.

In the second option, you need to open the app and go to the app preferences. Then tap the “Add Folders” option to choose the folders from which you want this app to fetch deleted files automatically. You can also configure the file types for fetching such as images, videos, audio, documents, compressed, etc. If you want to to recover or erase the deleted files permanently, then launch the app to select files and choose the options as “Delete” or “Restore”. 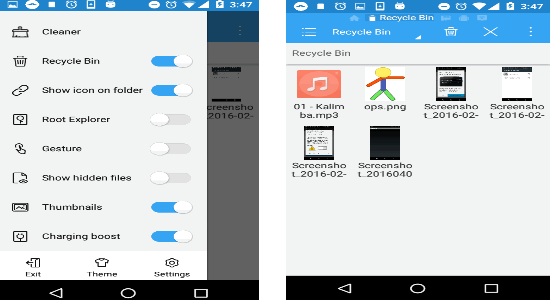 ES File Explorer is not a core recycle bin app for Android, however, it comes with an additional feature called “Recycle Bin”. The catch is that it only detects files which you delete using the ES File Explorer. To use this feature, all you need to do is tap the hamburger icon at the top and enable the “Recycle Bin” option as shown in the above image.

Once enabled, whatever files like images, audio files, videos, documents, zip, etc. you delete within the app, will directly move to the recycle bin. You can access the recycle bin from the “tools” section of ES File Explorer. Simply go to the recycle bin to browse the deleted files, and you can also restore them from there instantly.

Read the full review of ES File Explorer from here.

These apps help you keep track of your deleted files and also allows you to recover files which were deleted by mistake. The working is quite similar to the Trash Can of MAC and Recycle Bin of Windows PC. Using these apps, you can now have your own Trash Can for your Android phone. All of these apps supports files like images, videos, audio, documents, and more.

Try out each one of them and let me know which one you liked most in the comments.