ScreenFaceCam is a free screen recorder that lets you record your desktop screen, along with live webcam feed. It’s a simple and easy to use tool that allows you to record full screen or a selected region with live webcam feed, which appears in a small window placed at the bottom right corner in the final recording. ScreenFaceCam also support recording audio from various audio devices and saves the final output as WMV file.

ScreenFaceCam is available as a freeware and can be downloaded easily using the link given at the end of this article. Once you install ScreenFaceCam in your system, you can use it to record screen with or without webcam feed. Let’s see how to use ScreenFaceCam.

ScreenFaceCam opens as a plain blank window that looks more like a text editor rather than a screen recorder. The window contains a menu bar at the top that gives access to all common options of this free screen recorder. The “Cam and Mic” option lists all audio and webcam sources attached to your system. You can choose a desired webcam device and audio source and proceed with selecting a recording area.

ScreenFaceCam allows you to record full screen or selected screen region. The region selection can be made by resizing the program window and choosing “Select current window size and position as recording region” option.

Once you are done with this, you can preview the captured screen by clicking at “Options > View Image”. 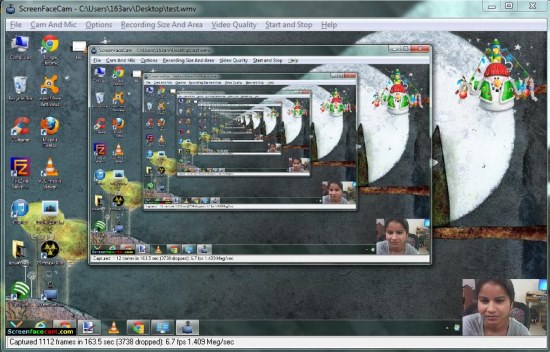 If you are satisfied with the selection, you can set the Video Quality and Start Recording from the “Start and Stop” menu option. ScreenFaceCam will ask you to specify a destination to store the recording before it starts capturing the region. Once you specify the destination, a recording will begin immediately. You can see the frame count on the status bar of the program window as an indication of the recording progress.

You can minimize ScreenFaceCam and let it run in background capturing the screen region with webcam feed and audio. To stop recording, you need to maximize the program window again and choose “Stop Recording” option from “Start and Stop” menu. 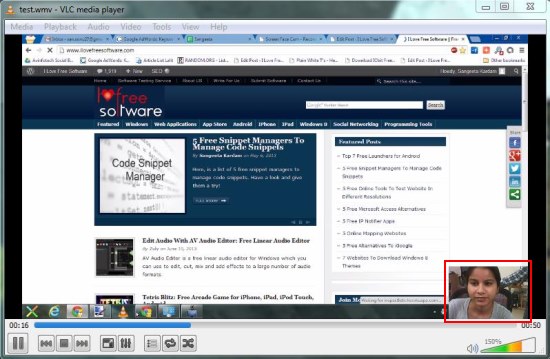 ScreenFaceCam is a nice free screen recorder to record screen with live demonstration of whatever is happening in a tiny window, but it has many flaws. It does support recording selected screen region, but the method it provides to select the region (by resizing the program window and placing it at the desired area) is not appropriate in my opinion. Secondly, the app doesn’t provide system tray integration or hotkey support – another major drawback for a screen recorder. Thirdly, the program interface gets captured in the beginning and end of every recording since there’s no other way to Start or Stop recording. And once you start the recording, you can not preview what is getting recorded and how it will appear in the final recording – the window remains blank. Also it’s not as powerful or feature-rich as its competitor software. Last but not the least, it is ad-supported; hence every recording will have a “screenfacecam.com” logo at the lower left corner.

So all in all, there’s nothing in this free screen recorder that could impress me. However, if you found it useful, you can give it a try.