If you are a frequent Reddit reader and use the official Reddit app for Android, you might have faced some issues with video playback and GIFs. The app takes too much time to load a video and many times just doesn’t play the video at all. It’s not a universal issue but lots of Reddit users are complaining about it on Reddit itself.

I don’t know when Reddit is gonna address this issue and fix the problem but, I can surely suggest you some alternatives. Here are 5 Reddit Android app alternatives which you can use to browse Reddit. All these apps play videos and GIFs without an issue. They play YouTube videos right in the app instead of forwarding you to YouTube app. Along with all the functionality of the official Reddit app, these apps offer additional perks and tools to make your Reddit experience simple and smooth.

So, let’s check out these Android apps one by one.

These Android apps are fully-fledged Reddit readers which you can totally use as an alternative to official Reddit app. In this article, my main focus is the video playback experience on these apps. 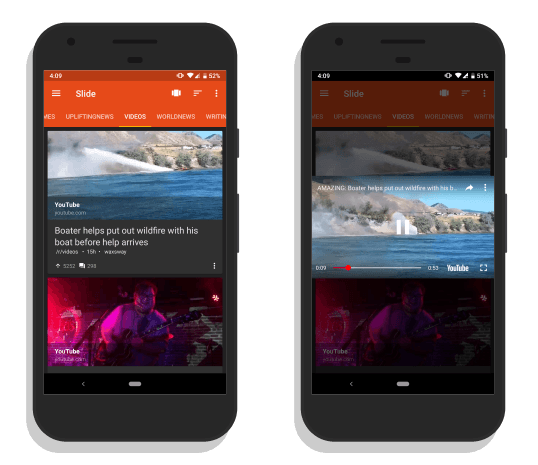 Slide for Reddit is a feature-packed open source Android app to browse Reddit. The user interface of this app follows the Material Design guidelines. On top of that, you can customize the UI and appearance of this app with over 12000 different theme combinations. This app is ad-free and has an Offline Read feature which syncs your subreddits automatically and lets you read them later without the need of an internet connection. You can also filter the content of a subreddit in this app.

In the case of video posts, Slide for Reddit shows you a thumbnail of the video along with the video source written in the bottom left corner. Below the thumbnail, it shows you the post text along with the subreddit name and the total number of upvotes and comments. When you touch on the thumbnail, it moves the video to the center of the screen (as an overlay) and starts playing it. Depending on your internet connection, it starts playing the video almost instantly. The background is faded in this video playback mode. You can also make the video fullscreen in the landscape mode. 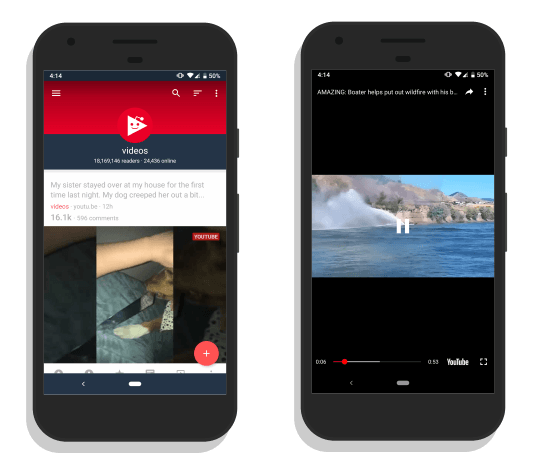 Boost for Reddit is another free browser app for Reddit. This app also has the Material Design user interface which you can customize with different color combinations. It also has an AMOLED Theme for the OLED screens. This app has a Card-based interface which you can customize from the settings. It also lets you filter a subreddit by contents and posts by author, domain, and keywords. The comments are also color-coded in this app.

You can view almost any type of media in this app whether its an image, GIF, GIFV, Gfycat, or a video. You can also download the media and share it with other through other apps. When you open a video post in this app, it plays that video in the center of the screen with black background. It shows the video title at the top and video control at the bottom of the screen. If you are browsing Reddit in landscape mode, the video plays automatically in the fullscreen mode. 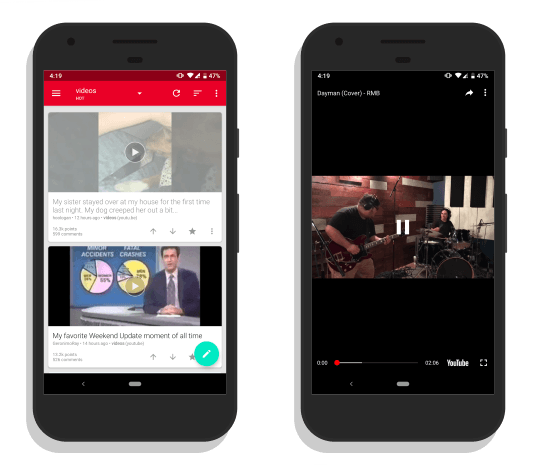 The next Reddit video player app on this list is Sync for Reddit. It is a free and fully-featured app to browse Reddit. This app also follows the Material Design and has a Card-based colorful user interface. You can customize the UI with different color combinations and post view options. This app has a night mode with AMOLED support which you can set to auto-switch. It has advanced text editor options for writing comments and posts. This app also has support for GIFs, Gfycat, GIFV, and galleries.

The video playback is smooth and instant in this app. For the video posts, this app shows you a thumbnail of the video with a play button in the center. It shows you the post information below the thumbnail along with upvote, downvote, and favorite buttons. When you open a video post, it plays that video instantly in the center of the screen with a blacked out background. There is no extra waiting like the official Reddit app. 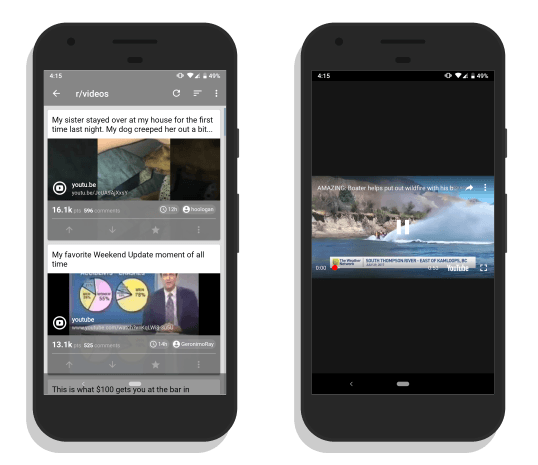 Now for Reddit is another free official Reddit app alternative that doesn’t let you down in terms of video playback. Instead of offering crazy customizations, it sticks with a simple Card-based user interface which is fine and responsive. One of the main highlights of this app is its text editor for typing comments which gives you all the essential text editing options such as text style, text alignment, insert links, insert images, etc.

The video playback in this app is quick and plays videos instantly. This app shows you a thumbnail of the video posts along with other stats and source information. The video plays in the center of the screen with video title at the top of the video and controls at the bottom. You can switch the video to fullscreen either using the fullscreen switch or by changing the orientation of your phone. And, you can directly upvote, downvote and favorite a video post right from the feeds. 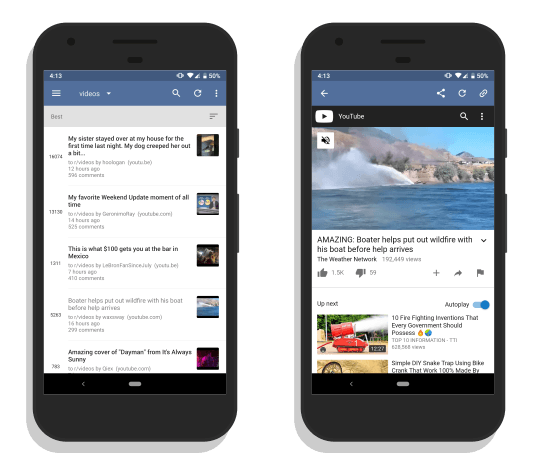 BaconRead for Reddit is another free browser app for Reddit. This app has the Material Design interface with customization and theming options. It has a Card view for the posts which you can change to list view from the settings. You can also change the font size and color for various app elements. The comment threads are color-coded here which you can collapse or expand with a touch. This app has a split screen mode and format toolbar for writing posts and comments.

In the case of List View, it shows you a small thumbnail of the video along with other post information beside it. In Card View, the thumbnail gets little bigger and post information shifts to the top and bottom of the thumbnail. When you touch on the video thumbnail, it opens a YouTube app WebView within the app and plays the video. This way, it eliminates the unusual loading time and you can watch the video right away.

These are the 5 free Reddit video player apps. These are the good alternative to official Reddit app without any GIF and video playback issue. On top of that, these apps also have additional functionality to make your Reddit experience smooth and user-friendly.