This article lists 5 free Bingo games for Facebook. Bingo games are pretty popular among all users because they are fun and easy going as well. All you need to do is listen to the numbers being called out and mark them on the cards you have. Now the calling out of the numbers is quite fast so you might miss out on a few numbers. But the plus point is that the numbers are also displayed on the screen to cross check. When you cross out all the numbers in a row, column, or diagonally then just go ahead and press the Bingo Button.

All these games also offer you special power meters to help you get more coins, or experience points while playing. Let’s have a look at these free Bingo games for Facebook below. 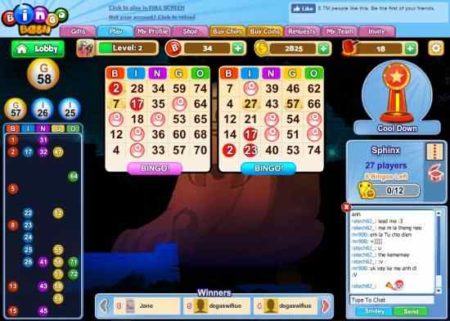 Bingo Bash is a free Bingo game app for Facebook. When you start the game you will get two options either to start in tutorial mode or skip the tutorial mode. If you are already aware of the Bingo rules then you can skip the tutorial. But if you are new to this game then you can go ahead and start the game in tutorial mode. In tutorial mode you will be shown where the numbers are called and how to daub the numbers which are called out. There is a special power cell which helps you in the game by making some cells free cells. You can use this power cell whenever its available on the top right side of your screen.

When the game is over you are shown a screen telling you how many coins and experience points you earned in the game. You will also see a chat window when you are playing the game. Here you can chat with other online players as well. The winners of a particular game are also shown at the bottom of the game window. The level you are at can be seen at the top of the screen. You can go back to the ticket selection screen to change the number of cards you have by clicking the lobby button given at the top left corner. 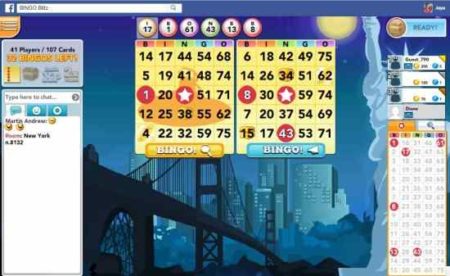 Bingo Blitz is a free Bingo game app for Facebook with a lovely interface. When you start with this game app, you will be taken to the first level called Catalina. Now the story behind this is that a thief is on the loose and you have to catch the thief and even get back all the treasure he stole. The treasure and things are hidden on the Bingo cards you play with. Each win takes you closer to catching the thief. Quiet a interesting story line.

So the game starts with a little tutorial to help you out. After which you can start playing the game. Initially you can play with one card only. But after a few levels you get the choice of choosing cards between 1 to 4. Once you start playing you get a screen like the one shown above. I started playing with two cards which can be seen above. Now the numbers will be called out loud as well as appear on the top of the screen. If you see the number on your card then you can daub that number in red. In case you missed any number you can look for them towards the right side of your screen. On left side of your screen is a chat window where you can chat with other players.

As soon as you are able to daub a entire row or column, you can go ahead and press the bingo button. You will then be shown your rewards for the round. You can also unlock new cities and destinations to play bingo in. Your level progress is also shown in the rewards window. 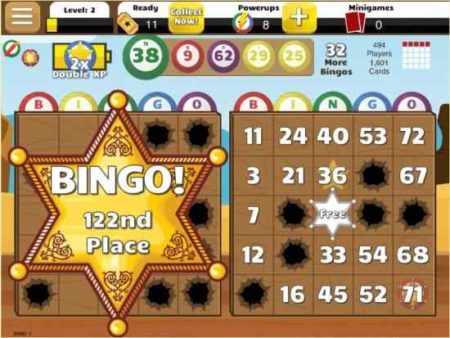 Bingo Showdown is a Bingo game app for Facebook. The app has nice background sound. When you start the app you will see on screen that there is a tournament going on and you can straight away join it. When you click that option you will be added to a already going on tournament. You will be asked to choose the number of cards you want to play with between 1 to 4. Choose cards and start playing the game. The numbers will be called out as well as you can see the numbers on top of the game screen.

If you see the number called out in your card, then go ahead and click on that number and a bullet hole will be punched in the place of that number. Marking that this number was called out and you had this on your card. The bullet hole is accompanied with the bullet firing sound as well, which is quite fun to hear. You have to get all the number in a row, column or diagonally, to get a bingo. When you get a bingo a star will appear on that card mentioning your position in the game, as can be seen in the screenshot above.

There is also a power meter given on top left of the screen which offers you power ups from time to time, so be on the lookout for that meter to be full as well. When the game is over you are shown your ranking for this game and a overall ranking among all the users. 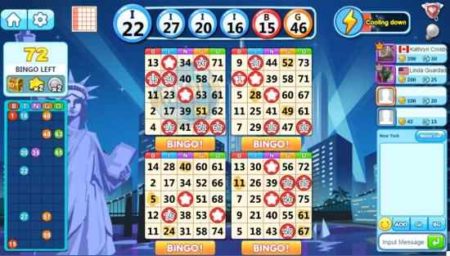 Bingo Holiday is a also a fun Bingo app for Facebook. At the start of the game you will see various cities listed. Out of them only the first one which is New York is unlocked. So you need to start playing with that and make your way through to the other cities. Click on the New York city tile and you will be asked to choose the number of cards you want to play with. Initially you will be allowed to play with one card. But after a game or so you can choose from 1 to 4 cards to play at a time.

When you start playing a window like the one shown above will open up. The numbers will be called out loud as well as displayed on top of the screen. In case you missed any numbers you can look them up on the left side of the screen. Right side of the screen has a chat window to let you talk to other users playing the game. When a number is called out, check if your cards have that number, if yes then daub the number with red color. All number in a row or column are daubed will mean its a bingo for you. Then you can go ahead and press the bingo button. 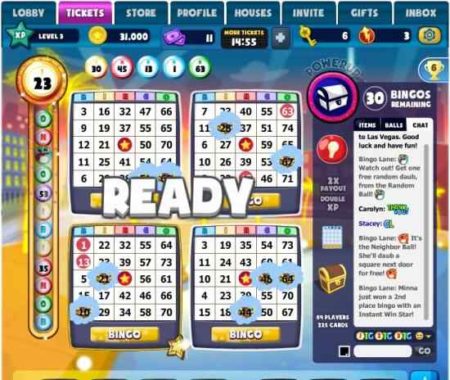 Bingo Lane is a another Bingo game for Facebook. When you start the game app you will be asked to click the play button to start playing the game. Then you will be asked to choose the number of bingo cards you want to play with between 1 to 4. Once you do that you have to wait a few second for the game to start. Once the game starts you will see a screen like the one shown in the screenshot above. The numbers will be called out from the left side as well as displayed on the top of the screen. If the number called out is in your card then go ahead and daub the number in red so you know this number has been called out.

Keep an eye on the power meter on the top right side, which will help you out when its full. There is a chat window as well on the right side to chat with other players in the game. Winning will increase the level you are playing at. Just keep on daubing numbers. When all the numbers in a row, column or diagonal are daubed then its time to press the Bingo button given below. Regular Bingo players might find the pace of the game a bit slow, as the numbers being called out are at a slow speed.

So these are the 5 free Bingo games for Facebook which you can play to enjoy in your free time. I liked all the 5 games, but the one I liked the most is Bingo Blitz, as it had a story around it, which was quite fun to play. So go ahead and try these games out and see which ones you like.