In this article, you will read about free Donald Trump soundboard apps for Android. The apps offer a good collection of hilarious dialogues in the voice of Donald Trump. You can tap on the sounds and play them to make people laugh. These soundboards have categories such as Intro, Conference, Statement, Beer, Replies, Names, Political, Money, and others. Every category has the number of audio clips of Donald.

Here, you get several phrases which you can tap to play sounds. These apps let you save the audio as favorites. Doing so, you can quickly play all the funny sounds. Also, you can set any sound clips as your phone ringtone, alarm or save to your device. You can play Donald Trump soundboard online as well.

Donald Trump Soundboard is a free Android app to play Donald Trump soundboards. When you open the app, it shows categories on the top. There are interesting categories such as Intro, beer, replies, names, political, money, and others.

These categories include small audio clips by Donald Trump. It includes around 300 phrases of Donald. If you tap on any category, it displays soundboard with a title. To play these sounds, you can tap on any button, then it plays the voice of Donald.

You can collect all the favorite sounds in a different section. To do so, you can tap and hold press on any soundboard and add sounds as favorites. Then, you can play all the best sounds quickly from your favorites. Also, the app lets you play random soundboard of Donald Trump. 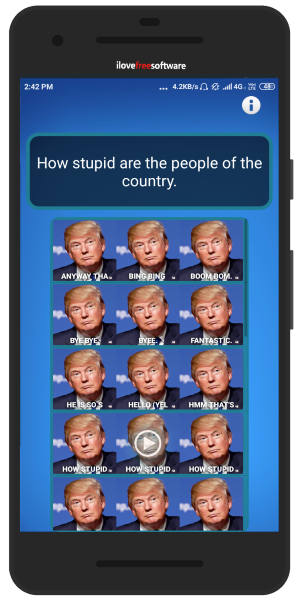 You can tap on any sound in order to play it. The box above displays the phrases of the sound. However, there is no option to add sounds as favorite but the voices are entertaining enough to enjoy Donald’s sounds.

Trump Soundboard is one of the best Android apps in terms of visual appeal. After launching the app, you will find the sounds of Donald on the homepage. The app displays the sounds in between.

You can tap on any phrase to play the clips. The app holds quite good collection of Donald Trump sounds. You can mark any clips as favorites. Also, you can share the funny sounds with your friends.

In order to add Donald Trump sounds in favorites, you need to tap and then drag and drop the clip over Heart shaped icon. Similarly, you can do with the sharing option. The app lets you search for sounds in the search bar. If you type random keywords, the app displays the audio related to that keyword.

President Donald Trump Soundboard is a free Android app to play funny audio clips in the voice of Donald Trump.

On its homepage, you will find the categories on the top. There are categories like replies, requests, names, political, conference, statement, etc. Each category contains a good number of sound clips. You can read the phrase and play the soundboard just by tapping.

To add sounds as favorites, you can tap and hold on the clip so that it can display options. Then, you can send clips as a Facebook messenger or add as favorites. Besides that, the app lets you set any sound as ringtone, notification, and alarm tone. 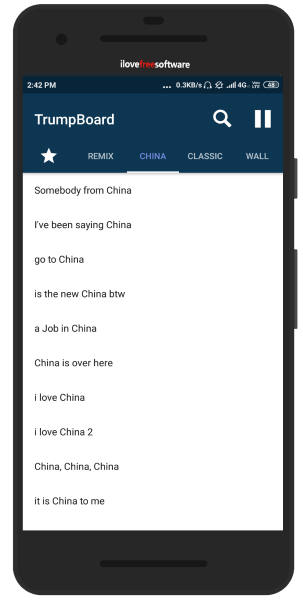 Donald Trump Soundboard is another Android app to play Donald Trump soundboard. This trump board has categories like remix, China, classic, replies, and others.

Though the app does not seem like a soundboard. But there is a good range of sound clips in the voice of Donald. The app displays phrases only which you can play just by tapping on the phrases. If you wish to keep favorites sounds aside, then you can tap and hold the phrase and add to favorites. Also, this app lets you watch an animated video on YouTube speaking the same dialogues available in the app.

If you ever wish to add some zeal in the boring environment, you can play Donald Trump Soundboard. There are so many audio clips in the voice of Donald Trump. Here, you get sounds with phrases which you can play and save as favorites as well.