Endless Run – Magic Diamonds is a free Windows 10 endless running game app to see how long you can run before you get caught by the police. In this game you are running as El Chapo and police is following you. You have to run over hurdles, slide under some, but keep running for as long as you can.

The Windows 10 endless running game app can be downloaded from the Windows 10 store or from the link given at the end of this article. When you start the app for the first time you will come across an interface as shown in the screenshot below. 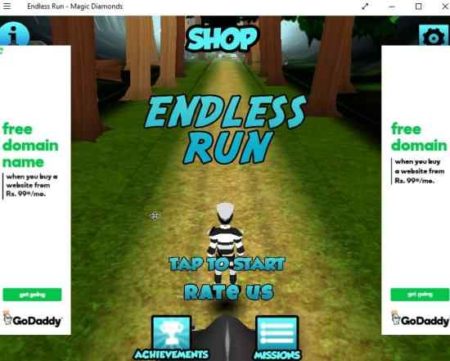 As you can see the app is ad supported. If you find them too annoying then you can switch to full screen mode. The home screen just has the basic options. Tap on the screen to start playing the game. You can view achievements and missions from here as well. You can check out the settings section or shop. Let’s start the game by tapping on the home screen. 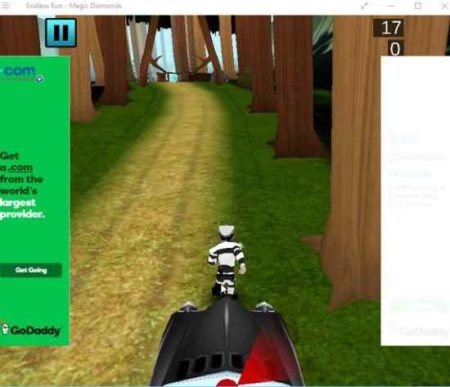 As you can see in the above screenshot, when you tap on the home screen, the man will start running. There will be a police car following the man. Try to run as long as you can before the police catches you. Use the arrow keys on your keyboard to make the man run. Downward arrow key to make the man slide and the upward arrow key is to make him jump. 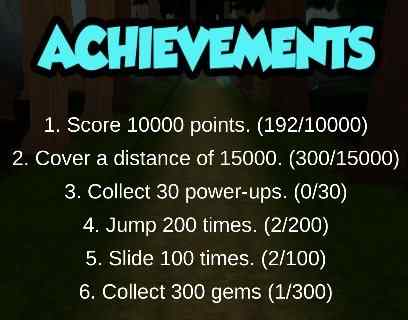 These power ups can be bought using the diamonds that you earn while you are on the run. The settings option of the app doesn’t give you much options apart from turning the music and sound on or off. 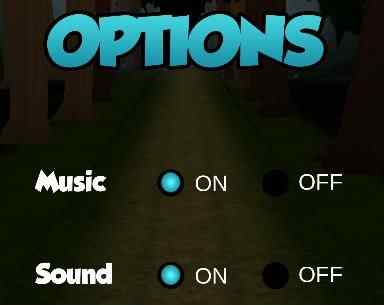 The settings window can be seen in the screenshot above.

Endless run is a fun running game where you have to escape from police. See how far you can run before getting caught. Overcoming hurdles is an important thing, because that is where I fell most of the times. The controls of the game are pretty easy and the animation is pretty good. You can upgrade your character after a few levels.