Read the full tutorial to know the steps to install this cursorFX theme pack to get Ubuntu mouse cursors in Windows 10. 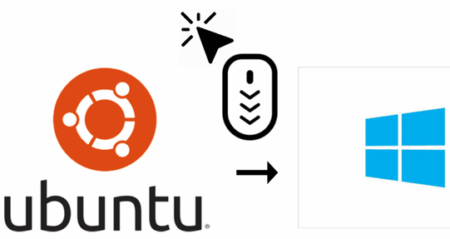 How to get Ubuntu mouse cursor for Windows 10:

There are many Ubuntu based themes for Windows 10 that you can install to make your Windows 10 interface look alike Ubuntu. However, there are a very few ways by which you can just bring some elements to Windows. In my previous attempt, I was able to bring the GNOME hot corners to Windows. In this tutorial, I will tell a simple method by which you can bring mouse cursor theme of Ubuntu to Windows 10. Well, nothing tricky is involved here, just a CursorFX theme which will instantly change your default cursor theme to look like Ubuntu ones. If you have used Ubuntu before, just like me, then you will notice they are almost similar and the mouse cursors animations too just as in Ubuntu.

Do note that you need CursorFX installed on your system to use the mouse cursor pack mentioned in this tutorial. CursorFX comes preloaded with interesting cursor icons and animations that you can apply to change the monotonous default Windows cursor icons.

Let’s now see the steps to install this CursorFX theme to bring mouse cursor icon packs of Ubuntu to Windows 10:

Step 1: Download the CursorFX mouse cursor theme file from the link provided at the end of this tutorial and extract it anywhere on your PC. After that, install CursorFX from the link provided above and open it, you will see its interface as shown in the screenshot below. Now, click on the New Package button and import the extracted cursorFX file. 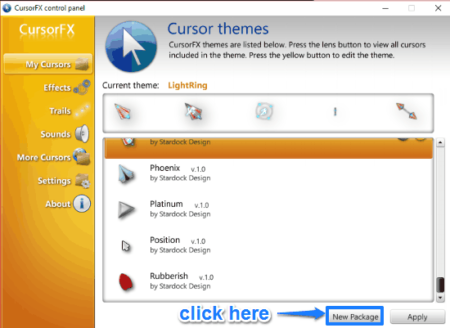 Step 2: After you have imported the Ubuntu mouse cursorFX file, you will see the CursorFX Theme Editor window, as shown in the screenshot below. You don’t have to do anything in this step rather just save and apply this Ubuntu mouse cursor theme which will instantly replace the default mouse cursor packs on your PC. 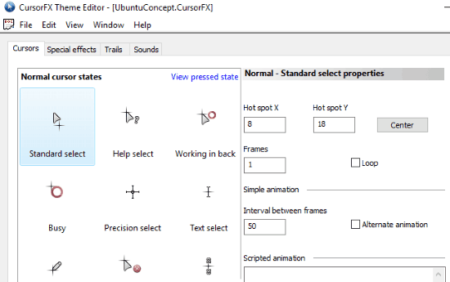 Select the “File>>Save and Apply” option from the CursorFX Theme editor, as shown in the screenshot below, to change the default mouse cursor icons to Ubuntu based theme. 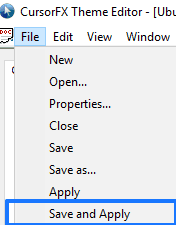 Here is a screenshot of the changed Ubuntu mouse cursors in Windows 10: 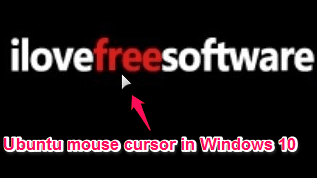 Get UC Cursors for Windows.